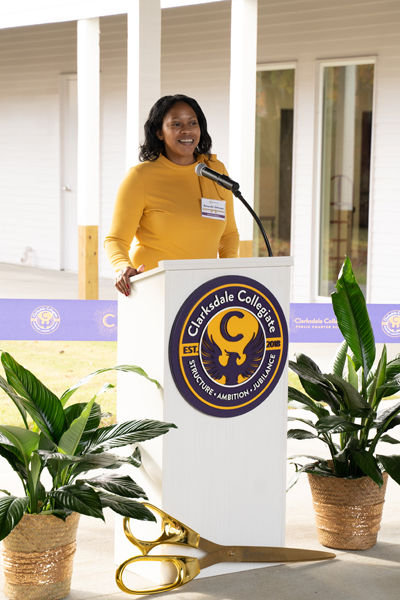 Beginning her educational career in the Delta with Teachers Across America, Amanda Johnson found her calling. The Little Rock, Arkansas native, currently Executive Director and Founder of Clarksdale Collegiate Public Charter School, was educated at Rhodes College with a B.A. in Political Science and Urban Studies, a Master’s from National Louis University in Educational Leadership and is close to finishing her PhD from Baylor University.

Working with Teach for America in 2003, she taught second grade in Mariana, Arkansas for three years, the moved to KIPP Delta College Preparatory School to teach sixth grade. She was also a member of the first cohort of the Miles Family Fellowship before beginning KIPP’s Fisher Fellowship in 2008. A year later, she founded and led KIPP Delta Elementary Literacy Academy (KIPP Delta ELA) for four years. She then spent two years co-leading the Fisher Fellowship with the KIPP Foundation and spent a year and a half as Director of Curriculum and Instruction for KIPP Delta Public Schools. Most recently, she completed the Building Excellent Schools Fellowship. But she had other plans—originally.

So much so that she eventually started her own school—Clarksdale Collegiate Public Charter School. She started that venture in 2016 applying for the charter. After final approval, the doors opened in 2018.

The goal is to have seventy-five scholars in each grade level divided into three classes kindergarten through eighth grade. Johnson’s main thrust for students is in the Clarksdale area but buses run throughout the county and beyond bringing in students from several counties and school districts. Her philosophy is to challenge and grow and give opportunity to all.

“The kids in the Delta can do amazing things—especially if they are provided the opportunity. Our biggest thing is that when our scholars leave us, they have plenty of opportunities available. We talk a lot about college throughout their time here. They can decide what their options are whether it’s a two-year school, four-year, military – we want to make sure kids have all the options open to them and that they are prepared and they have the foundation necessary to be successful.”

Johnson and her staff “spend a lot of time on core subjects, making sure they are performing at or above grade level.”

The plan is to eventually expand to a K-12 school, but she’ll have to apply for a new charter for high school.

In her limited free time, she is a Girl Scout Co-leader as Cookie Season is getting ready to start.

“We have about eighty kids in our troop,” she says. “My two girls go to the school, a ten-year old and seven-year old, that’s the main reason why I started the school.”

With one daughter practicing to be a gymnast, Johnson finds a lot of her “free time” driving to practice and meets. She also stays active as a rock climber, travelling and even participates in running. She recently completed the St. Jude Half Marathon.

Amanda Johnson, a Delta Advocate concerned about and devoted to Delta area education.