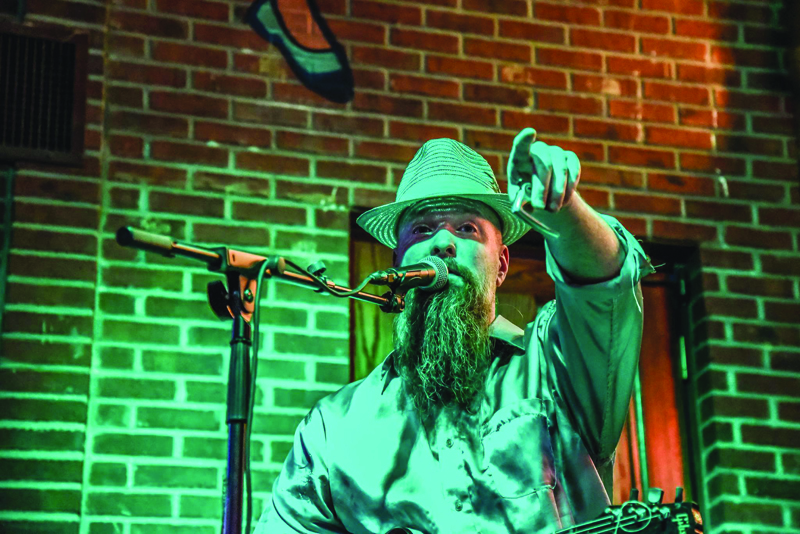 Sean Apple may not have been born in the Mississippi Delta; but he says he’s lived here long enough that it almost feels like he was—and that the state has certainly become his real home. And it’s all because of his devotion to a Delta musical creation and tradition.

The longtime blues musician (the love of which brought him to the Delta from Pennsylvania) recently opened Clarksdale’s newest blues “joint” the aptly named Bad Apple Blues Club, which held its grand opening on June 12. A true labor of love, the new owner promises an authentic and real blues experience at the club for fans of the genre.

“I myself have, number one, always been a fan of the blues,” says Apple. “And secondly, I consider myself a blues musician. So, the transition to blues club owner is basically a natural progression. I’ve personally played in so many clubs over the years and the best place have been Po’ Monkeys in Merigold, for instance, and some juke joints in Marshall County, the old Subway Lounge in Jackson and Red Lounge in Clarksdale—those places influenced me and served as a model for Bad Apple. Those places are real blues clubs. Sadly, the descriptive ‘blues club’ is thrown around a lot these days to describe various venues but, because of economic pressure, oftentimes other, more contemporary music like country or hip-hop has to be played to bring in the crowds. That won’t be the case at Bad Apple Blues Club,” Apple assures.

As someone who claims to “eat, breathe, sleep and bleed” blues music, Apple will even be living right next door to the club.

“We will open at 4 p.m. in the afternoon and I’ll be the first guy out there playing with my one-man band show,” he says, meaning singing, playing guitar and small drum kit all simultaneously. He plans to open with his performance, play until around 7:00 p.m. and then have the other artists hit the stage at 8:00 p.m.

“The term ‘blues’ gets thrown around alot these days,” Apple notes. “But, you’ll get nothing but real, downhome, authentic blues at Bad Apple. If I end up losing every bit of money I put into the club, then so be it—I’ll always stay true to my vision and mission of bringing only the real thing to my place and I think the folks who come in will catch that vibe right away.”

Having lived, as a young man, with an 88 year-old blues musician in Bentonia named Jack Owns for a time, Apple says he even came to appreciate and understand the day-to-day lives of authentic players of the music that was born in the Delta.

“I was amazed at how welcoming the older blues men and women players were when I lived with Jack,” Apple says. “It seems that, right after you meet them, you’re out fishing together or drinking together—just super accessible and welcoming people. I got to know and befriend so many great, older blues musicians and there are no other people like them anywhere.”

“I’m located right down the street from the Crossroads where Robert Johnson sold his soul to the devil,” Apple explains. “Clarksdale is the blues in so many ways. People from all over the globe come here to experience ‘it’—not just tourists and blues fans but well-known rock musicians, too. This is the Mecca of the blues—where else would I rather have the club? So much history here—it’s truly special and unbelievable. I think Bad Apple Blues Club will draw those people who are excited about and want to hear real blues music. I had always wanted to own a club here in Clarksdale and when this building, which used to be Club 2000, became available I jumped at the chance.”

Apple had been playing a regular, five-nights-a-week gig on Beale Street and lived just north of Memphis when he decided to make that jump and come to Clarksdale.

“The Beale Street thing paid the bills but the audience mainly just wanted to show up, have a good time, regardless of the music,” he says. “That won’t be the case with Bad Apple Blues Club. I think the minute people enter the door they’ll know, they’ll sense, it’s authentic blues music.”

Having bought the building last year, Apple was set to open his club this past March. But, as it did to all other businesses, the Covid outbreak dramatically changed things and made that goal impossible. “I looked at the delay as yet another struggle in the life of a blues player,” Apple says, half-jokingly. “I just had to roll up my sleeves and work that much harder. But, as we’ve seen all around us through this pandemic, Mississippi folks are tough and I now consider myself a Mississippian, so I got through it and so will all of the rest of us.”

Open every Friday and Saturday from 4:00 p.m.until Midnight —the Bad Apple Blues Club will simply offer “blues and beer” says Apple. “As we build up the business, I’ll also start opening on Wednesday and Thursday nights. That’s the plan right now. And my plan is also to feature primarily Mississippi-based blues musicians as much as possible.”

Sean Apple has come a long way from the 12 year-old kid listening to blues records in upstate Pennsylvanian to a blues club owner in Clarksdale, but he says the journey was probably inevitable and he couldn’t be more excited about his new venture.

“If I have to sit every night and play by myself, that’s what I’m going to do. However, if I get the great honor of people coming in to visit and hang out they will be welcomed with open arms and a whole lot of gratitude from me. I’m very happy right now,” he says. “My dreams have really come true.”