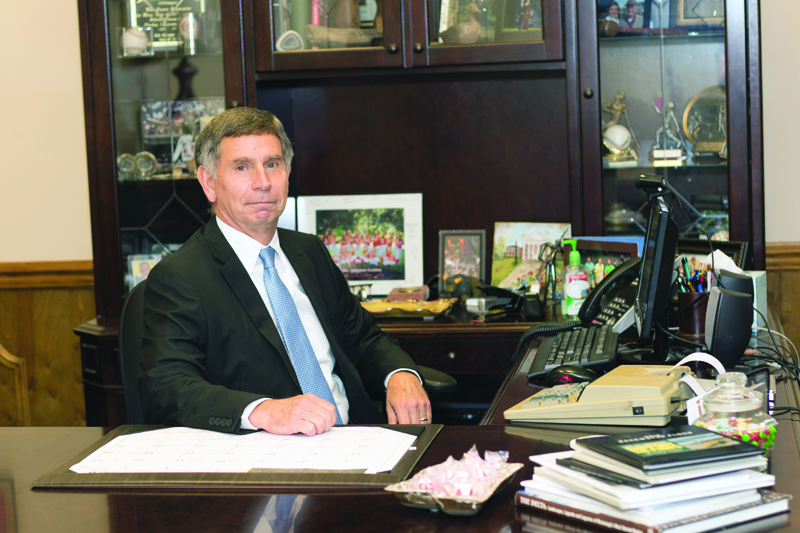 Andy Anderson has been with the Bank of Anguilla since 1983. He is now the CEO and President of the very bank that foreclosed on the house in which he and his mother lived when he was a child after his parents divorced.  This is but one fascinating story found throughout Anderson’s career and also one that demonstrates how far the bank has come and speaks to its’ mission and purpose today.

“We are the only bank in Sharkey and Issaquena counties, two of the poorest counties in the nation, and have four locations: Anguilla,  Cary,  Rolling Fork and Mayersville,” says Anderson.  “The biggest part of our overall business by far is agricultural production loans which make up about fifty percent of our portfolio. The biggest number of loans, however, is in consumer loans.  We try to lend to people that other banks might not even talk to, primarily because of where we live and the fact that we know everyone in the area. Certainly you have to say ‘No’ sometimes, but we go out of our way to try and find a way to help any customer that comes through our doors who truly want to help themselves.”

As of December 31, 2021, the Bank of Anguilla had approximately 1,276 loans. It is  designated as a Community Development Financial Institution (CDFI) by the U.S. Treasury Department. CDFI banks have, as their primary goal and mission, of promoting community development, which distinguishes them from traditional banks and thrifts.

“Bank of Anguilla is a ‘mission minded’ bank and what we do as a bank and as individuals/employees goes well beyond the scope of normal banking,” says Anderson. “We invest tremendously in our community and its people. We have the roots: we’ve been here since 1904 and still remain  an independent bank, which is incredible in this day and time. No individual owns even eight percent of our stock and no family owns fifteen percent.”

The bank is also committed to training existing employees and taking care of them. “Bank of Anguilla has sent over one third of its employees since 2016 to the Mississippi School of Banking who graduated.  Mike Duggan, Pam King and Ashton Sandifer graduated in 2021.  Our Vice President, Kit McCoy, graduated from the LSU Graduate School of Banking in 2021. Now Kit is on the Mississippi Regulatory and Compliance Steering Committee and she served as their chairwoman in 2021,” says Anderson.

“But not only do we stress and promote continuing education for our thirty-two total employees,” adds Anderson, “we also take care of them by periodically giving them bonuses to use on their vacations, gift certificates that are always bought from local merchants in the towns we serve—which helps them—and also provide, as a Christmas bonus, at least an entire month’s salary to every single employee. Our board approves all of this for our folks. We have mission projects, do volunteer work and even have our own softball team which plays for charity. We do a great deal more for them throughout the year—they are our main assets, of course, but also our family.”

Active within the banking community in the state and the entire country, Anderson, an Ole Miss graduate, is currently serving a second term as Chairman of the Mississippi Bankers Association and also serves on the Board of Directors of the American Bankers Association, the largest trade group for banks in the nation. Last year, Anderson served as a mentor on the faculty of the Colorado Graduate School of Banking in the Executive Management program and is serving again in 2022.  He just recently returned from California where he gave a speech at the ABA Community Bankers Conference. He also does a great deal of work with the Mississippi Young Bankers Association, because he is committed to helping the young men and women entering the profession.

“Our bank is well known nationally for speaking out on lending and investing in small, rural, poor areas, actually,” says Anderson. “Senator Cindy Hyde-Smith asked me this past June to come to Washington and testify before the Senate Appropriations Sub Committee about lending in rural areas like we do. I did testify and hope and believe that I did some good. I also serve as Chairman of the Conference of State Bank Supervisors (CSBS) Bankers Advisory Committee in Washington, D.C. The CSBS governs over the state banking departments in each state and has an advisory board consisting of around eleven to thirteen bankers from across the country,” says Anderson.

“In addition, I’m proud to serve on the Board of Directors of the Community Development Bankers Association in Washington which is the trade association of Community Development Financial Institutions. I use this platform—among others that I have—to talk about lending in poor areas and going beyond traditional boundaries to help those in need. It’s an important topic, especially now and especially in Bank of Angulla’s coverage area.”

However, it is a struggle for small, independent banks like his to survive in today’s environment, admits Anderson.  “We serve a mission in the Delta and in our two counties—but it is getting harder and harder to be able to do this. That said, Bank of Anguilla and our employees will continue to do all in our power to support, help and guide our customers and the entire communities we serve.”