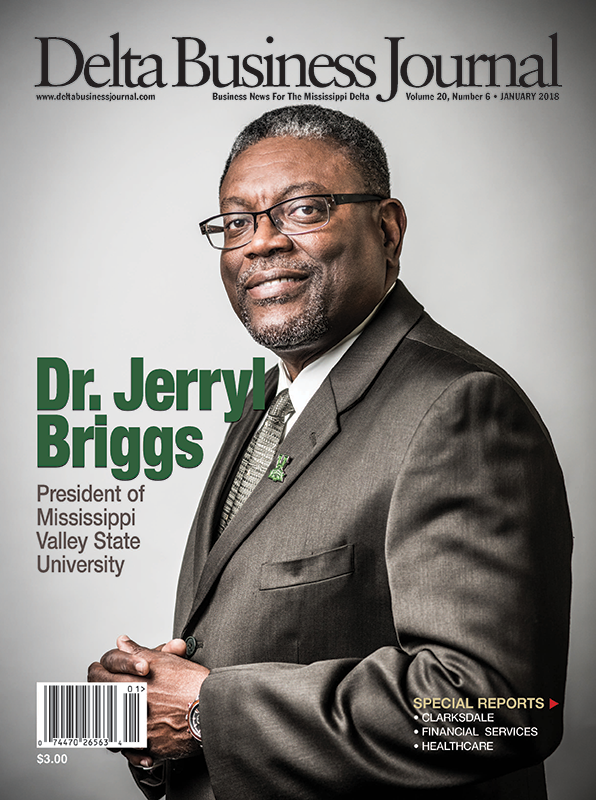 “Dr. Briggs worked very closely with Dr. Bynum and they made a lot of progress,” Dr. Pennington says. “The Valley constituents feel very positive about Dr. Briggs. That’s a big step that the students, faculty, alumni and business community have a good impression of Dr. Briggs. And that’s a very important issue that the people feel positive about him. They were all highly in favor of Dr. Briggs being appointed president.”

Dr. Pennington understands the positive of Dr. Briggs already having been part of the positive movement at MVSU “gets him off to a great start” and his willingness to be involved with the constituents and his communication with them impressed Dr. Pennington.

“Communication is a very, very important aspect for a leader,” he says. “He’s been there through the progress and Valley has made a lot of important steps since Dr. Bynum and Dr. Briggs have been there. With him taking over the presidency, he won’t lose any ground. He knows the lay of the land and he will be able to keep moving forward.”

“Dr. Bynum and I both have a passion for higher education, particularly for our HBCUs (historically black colleges and universities),” Dr. Briggs says. “It’s critically important for universities such as MVSU to continue to thrive and build on our continued need to be a part of the overall higher education landscape.”

City of Greenwood Mayor Carolyn McAdams who has been in office since 2009, works closely with the University and is excited for new president.

“I met Dr. Briggs at our local chapter Mission Mississippi meeting several months ago,” Mayor McAdams says. “I continued to see him throughout our local community attending events sponsored my Main Street, Chamber of Commerce, Museum of MS Delta, and even our Greenwood City Council Meeting. Dr. Briggs is interested and involved in supporting Greenwood and wanting to see it prosper.”

“One of the reasons Greenwood has been successfully staying on the cutting edge of a progressive city is MVSU. Valley has a large impact on Greenwood’s economy and supplying us with an educated work force,” she says. “The City of Greenwood has supported Valley on a number of key issues that have helped both of us, one being our recent initiative of Valley connecting to our Waste Water Treatment Plant and saving Valley Millions of dollars while helping Greenwood become more versatile in our treatment efforts.”

She noted that the hiring of Dr. Briggs and the University overall “is a win-win for Greenwood and I am thrilled to be able to work with Dr. Briggs and MVSV. I believe we will see in Dr. Briggs a strong quiet Christian leader successfully moving Valley forward in a very positive way.

“We will continue to build on our enrollment success model, with the goal for Valley to be recognized as a leader in that area regarding strategic enrollment growth, and increased retention, persistence, and graduation rates,” Dr. Briggs says. “Valley has several challenges, however, with past stewardship and strategic spending, we are in a better position to address some of those challenges, especially regarding funding support.”

The Itta Bena based university continues to be a benefit to the Delta according to Dr. Briggs.

“MVSU provides a four-year higher education opportunity for so many within the Mississippi Delta and beyond. I truly believe that the university is a tremendous asset to our community and serves as a significant economic engage for Leflore County,” he says.

According to the IHL, the campus is on a good trajectory with solid enrollment. From fall 2013 to fall 2016, MVSU has seen an increase in enrollment each year for a total change of 11.4 percent. And the university is in good financial shape. In the past four years, the university’s cash position has improved by 47 percent. The days of cash on hand have improved by 65 percent, from 63 days of cash on hand to 105 days.

“Throughout the listening sessions, we heard the Valley community say that the university’s next president should be someone with vision who will bring stability to the office and build on the current success,” says Hooper. “Dr. Briggs clearly has a commitment to the history, legacy, culture and mission of the university, as well as a vision for the future.”

Briggs former role as Executive Vice President and Chief Operating Officer and as the ranking vice president gave him direct oversight for the operational well-being of the university, assessing the university needs through formal structures and constant contact and involvement with all elements of the university.

“It is indeed an honor and blessing to be named the 8th President of Mississippi Valley State University,” says Dr. Briggs. “I would like to thank search committee chair, trustee Shane Hooper and the entire IHL Board for having the confidence in me to lead Valley. I would also like to thank our Valley family for their support and encouragement, and we will surely continue to keep ‘Valley In Motion.’”

During his four years at MVSU, Dr. Briggs helped reestablish the University College model which has led to successfully improving the University’s retention rate by 10 percent for fall 2014 and 12 percent for fall 2015. He also worked collectively with MVSU staff to increase overall university enrollment that resulted in more than a 200 percent increase in dual enrollment students for fall 2016 and an overall 11.4 percent within the last three years. His duties also included managing the $17 million capital improvement project for the university’s athletic complex, with additional planning underway for renovations to residence halls and other campus buildings.

“Dr. Briggs has demonstrated exceptional leadership skills as Acting President and Executive Vice President at Mississippi Valley State University,” says Dr. Glenn Boyce, Commissioner of Higher Education. “Having honed these skills over many years in higher education, he has developed a student-centered approach that puts a laser focus on enabling student success. His experience and skill set, coupled with an understanding of the university and the Delta gained since coming to the university, make him ideally suited to lead the university into its next chapter.”

“Dr. Briggs has been an important part of the progress made at Mississippi Valley State University in recent years,” says John Johnson, president of the MVSU National Alumni Association. “Dr. Briggs is an exceptional leader who will be able to build on the progress made without missing a beat. He understands the campus, the students and the Delta. I look forward to working with him in this new role.”

His own education includes a Bachelor of Science degree in chemistry education from Xavier University of Louisiana in addition he has a Master of Arts degree in human relations and supervision from Louisiana Tech University. He also acquired both an Educational Specialist degree in higher education administration and doctorate in educational policy, planning and leadership from the College of William and Mary in Williamsburg, Virginia. In addition, he completed Harvard University’s Institute for Educational Management program.