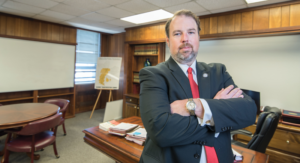 Chris Caldwell developed a passion for public service at an early age. He grew up on his family’s cattle ranch located just outside of Little Rock. There, he gained a strong sense of duty and learned the importance of getting involved in his community and working to make a meaningful difference in people’s lives.

“I grew up in a very civically and politically engaged family that was involved in local, state and federal campaigns,” Caldwell says. “My time working on and around campaigns helped me understand the importance of listening to and meeting the needs of constituents at every level.”

Today, Caldwell applies the lessons he learned from the campaign trail to his role as federal co-chairman of the Delta Regional Authority (DRA), where he serves more than ten million residents in 252 counties and parishes in DRA’s coverage area. It is a large territory, but since his appointment by President Donald Trump just more than a year ago, Caldwell has logged tens of thousands of miles traveling across DRA’s eight-state footprint: Alabama, Arkansas, Illinois, Kentucky, Louisiana, Mississippi, Missouri and Tennessee.

“Our team has made it a priority to travel the region to meet people in their own backyards,” Caldwell says. “We’re 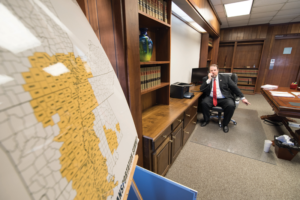 not just a faceless federal agency in some building far away. We’re out there looking at projects and meeting with our constituents to deliver investments that improve economic conditions and help create and retain jobs.”

Boozman was an important mentor for Caldwell, teaching him how to listen and respond effectively to constituents. “My father and grandfather had immense influence on my life,” Caldwell says. “Outside of family, Sen. Boozman was really the first mentor I had. He was extremely influential in where I am today. I learned from him the importance of constituent services.”

More important than campaign work, Caldwell was in charge of all Arkansas projects for Boozman. Building on what he learned as a youth, Caldwell gained even more insight about listening to and meeting the needs of folks from all backgrounds and parts of the state.

“Chris learned how to work with the different communities and agencies involved at various levels of government,” Boozman says. “He is a good manager who knows how to work with people and meet their needs. He is also a guy who understands that these are service jobs—and the most important thing is to take care of people.” Understanding and serving the needs of people living in the Delta region is at the heart of DRA’s work. The agency invests in four primary areas as outlined by Congressional statute: basic public infrastructure; transportation infrastructure; workforce training; and business development.

Boozman noted that Caldwell has a passion for working with others.

“You change the world through personal relationships and he is very good at that,” Boozman says. “He is passionate about what he does. He is a good communicator and almost too hard of a worker. Chris is working very hard at representing all the people who live in areas covered by the DRA and he has a strong vision for how to create economic opportunities across the region.”

President Trump’s budget called for eliminating the DRA (and dozens of other programs), but Congress continued to fund it. Strengthening relationships with the agency’s congressional delegation, as well as state governors, has been a priority for Caldwell and the DRA staff.

“I am really proud of the relationships we have forged with our federal delegation and our governors, who are key to 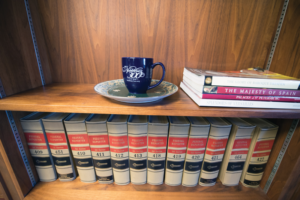 giving input on our investments,” Caldwell says. “Those relationships are vital to this agency. My job every day is to prove how important this agency is not just to our region, but the nation. The vast majority of the people in the DRA footprint live next to the greatest superhighway in this country, the Mississippi River. The river is the backbone of our footprint and is key to helping us increase commerce and build economic opportunities to better the lives of our constituents and support our nation’s overall economic output and growth.”

Caldwell has put his mark on the agency by working to streamline operations, allowing DRA to make sure its budget is dedicated to investments that help Delta residents and communities.

“Being more efficient and focusing on the core priorities established by Congress ultimately means more money to invest in our region,” Caldwell says. “In 2018, we invested just under $25 million in 88 projects. Our water and sewer projects alone will improve life for 150,000 families, and our projects were leveraged into nearly $1 billion of investment from public and private partners, which led to the creation and retention of more than 5,000 jobs and the training of 9,000 workers.”

In the Delta, there is a significant shortage of welders, electricians, plumbers, truck drivers, linemen, and people who work on transport barges on the Mississippi River. These are professions that require skills training. And while there is low unemployment now nationwide, there is a disproportionate number of Delta residents are underemployed or unemployed.

“Trying to connect the dots between good employment opportunities and training a highly skilled workforce is a natural fit for our agency, and we plan to expand our efforts there in the coming years,” Caldwell says. “When you look at generational poverty in the Delta, I strongly believe the way to end it is by developing job opportunities in the skilled trades. You can change the outlook of the whole family by one person becoming a journeyman electrician or getting a job working as a deckhand on the river.”

Under Caldwell, DRA has focused on improving the health of Delta residents by modernizing and expanding rural healthcare facilities and working with the Department of Defense (DOD) on the Innovative Readiness Training program, which provides essential training for our armed forces and care for Delta residents. The agency also placed 163 doctors in rural areas of the region to help advance medical care in 2018.

“We have also partnered with the U.S. Health Resources & Services Administration to provide technical assistance to ten rural hospitals to help improve efficiencies and provide better services, which leads to a healthier workforce that can meet the needs of businesses,” says Caldwell. “Innovative Readiness Training is a hugely beneficial program for our constituents, and is vital to the training and preparedness of our men and women in uniform.”

Population loss in rural areas is of major concern in the Delta. One way DRA is tackling that problem is to increase access to broadband. In December, DRA invested $1 million to deliver broadband service to eight counties in the Missouri Bootheel.

“Providing broadband to rural communities is a huge step in helping combat population loss and delivering new services and opportunities to folks who live in the region,” Caldwell says. “Access to affordable broadband is essential to every community today, and DRA is committed to expanding our efforts in this area.”

In 2019, DRA will emphasize working with federal partners to strengthen apprenticeship programs, which will help with job opportunities across the region and support a key economic-development opportunity identified by President Trump.

“At DRA, we’re focused on improving workforce training by collaborating with industries to understand and meet their needs,” Caldwell says. “Developing partnerships with business through apprenticeship programs will help us retain jobs and be very competitive for future economic opportunities.”

Caldwell understands it is important to keep re-evaluating the work DRA does to make sure it continues to create job opportunities and give communities the tools and infrastructure they need to retain the businesses they have and attract new industries.

“DRA will continue to make investments that spur economic development and help create jobs for the folks in our region,” Caldwell says. “We need to take a hard look at what we’ve done well and where we can improve. We know that infrastructure investments work and are important to our future as a region, so we’ll continue investing there. But we’re also going to work on developing initiatives like apprenticeship programs and broadband services that expand economic development in the region.”