Errick Simmons – Greenville Mayor Optimistic About his Town and the Delta 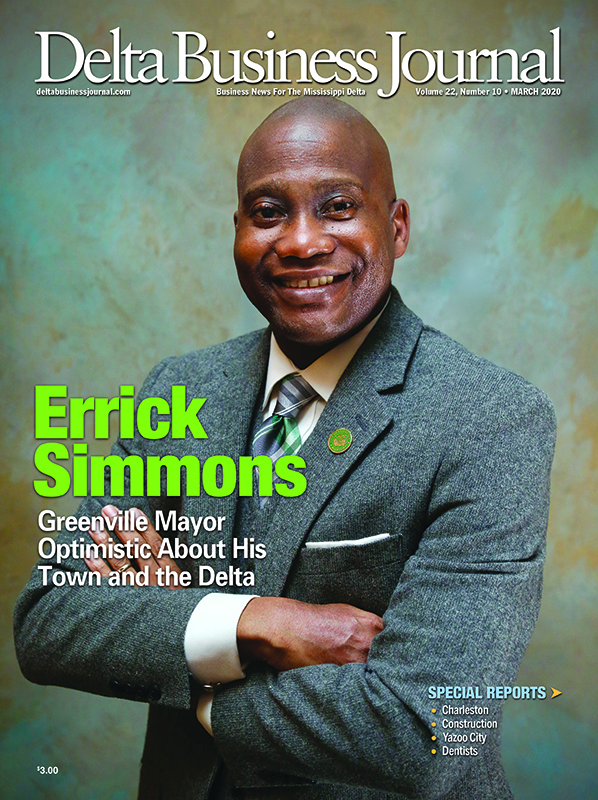 After a historic win for mayor in 2015, Errick D. Simmons recently won re-election to his second term as mayor without facing an opposing candidate. His identical twin, Sen. Derrick Simmons, is also a high achiever, currently serving as Senate Minority Leader of the Democratic Caucus in the Mississippi Legislature.

The brothers, born in 1976 in Greenville who currently practice law together, have been involved in politics and community service from an early age. They often vied for top positions.

“We are very competitive,” says Simmons. “We both have a personal commitment to give back to our community and have always served in leadership positions.”

After law school, he returned to Greenville to work for McTeer & Associates in Greenville, working primarily as a trial attorney.

“I always wanted to come back home and give back to better Greenville and the Delta,” he said.

Soon after moving back to Greenville, Errick was elected to the city council in 2007 making him the youngest to serve in the position at that time. For the next eight years he learned the issues, the players, and the complexities of local government before running a successful campaign for mayor.

“I don’t care what you have done before, people are going to want immediate attention to their needs, whether it is getting a pothole fixed or a water bill reduced,” Errick said. “You find out the challenges and, more importantly, the opportunities that exist in municipal government or any government. I wake up thinking about city government and go to sleep thinking about city government in regards to how we can improve the quality and quantity of life for the folks we represent, particularly in the Delta where the soil is so fertile and our culture so rich.”

Errick brings strong religious faith to his enterprises. He grew up in a family that attended church every day of the week. You might find him quoting scripture when talking about things like providing affordable housing opportunities to local residents.

“Errick is a great leader,” said Tom Gresham, president of Delta Council. “He listens well, and he is very positive about making the Delta a better place to live. He is very focused on workforce training, and has been a good mayor. He is making a difference.”

One accomplishment that is particularly dear to Errick’s heart is Greenville receiving the 2017 City Livability Achievement Award by the U.S. Conference of Mayors for the city’s “Worship on the Water” initiative.

“This was our first initiative to be one people, one goal, one Greenville,” Errick said. “That is the city’s mantra’s now. We are one. Worship on the Water is a way to promote unity and foster togetherness in the community keeping God as the center of our administration. This is a faith-based, interfaith, inter-denominational initiative. Every fifth Sunday we come together and participate in corporate worship where we come together regardless of racial identify or religious affiliation.”

There might be a Baptist choir singing inspirational hymns after a Catholic priest delivers a sermon.

“It is the greatest community development initiative I’ve seen in action,” he said. “The service is held right on Lake Ferguson at a pavilion with the water as a backdrop. Folks go to their own churches in the morning and come out from 2-3 p.m. in the afternoon. It is so exciting to come to.”

Errick counts his parents as having the strongest mentoring role in his life. His mother, Alzena Simmons, worked as a grocery store cashier, retiring from Kroger Foods after 35 years. His father, the late J.C. Simmons Jr., worked at Utility Products until that closed, and later at Waste Management, BFI and Pepsi-Cola. His parents grew up with very limited economic means, and a great love of faith and family.

“We are always in church, always involved,” he said. “Our grandmother, grandfather, and other family members went to the same church. Church was our backbone.”

Errick is one of the biggest cheerleaders of the city with the largest population in the Delta. He refers to it as “the Queen City of the Delta.” He touts the friendly people, the Southern hospitality, the blues, the food, tourism and being a major agriculture hub for the region.

“It is situated on banks of the Mississippi River, and has a wealth of great places to live, eat and play,” he said. “People come from all around the nation and many foreign countries come to experience the legendary Mississippi Delta at its best.”

He also sees it as an economic powerhouse for the Delta.

“Mississippi ranks number one in the competitive cost of labor, but quality is what attracts business and industry to Greenville,” Errick said. “Greenville is a hub for agribusiness from row crop production to crop science. It has a thriving port near the mouth of the river, and global companies like Mars Uncle Ben’s, call Greenville home. Uncle Ben’s Rice is made only in Greenville. From farm to fork, Uncle Ben’s directly and indirectly supports 1,000 jobs from farmers, truckers, processers and shippers. Uncle Ben’s is shipped around the world.”

Greenville has been designated the Hot Tamale Capital of the World, and has the most home-based tamale makers per capita in the country. The 2019 Hot Tamale Festival drew an estimated 24,000 people, and had an economic impact of $5 million.

“We also have the Mississippi Delta Blues and Heritage Festival, the oldest blues festival in the world, which attracts tens of thousands of people including a lot of international travelers who come to enjoy blues music, good food and the hospitality of people here in Greenville with a $3 million economic impact,” he said.

Highlights of his first term include about $110 million in new investments, including a new $40.1 million federal courthouse, and a $20 million investment by the Australian company Nufarm. Tru by Hilton has invested $10 million in an 84-room hotel expected to employ 30. The $6.1-million Ed Gray Park Housing Development involved the city donating a park to build 42 low- to moderate-income homes. There was also the $9.1-million redevelopment of the old Sears and Roebuck property downtown. Under his leadership, a record number of small businesses have opened.

Errick has a middle name given by some residents. It is “infrastructure”. The city has spent about $32 million on public infrastructure projects including fixing the sewer collection system and wastewater treatment plant. He said infrastructure improvements are critical to economic development. The city has also worked to promote commercial passenger service through Boutique Air, which provides flights to Atlanta and Dallas throughout the week.

Errick is also a big supporter of workforce training supported by the Mississippi Delta Community College, and dual enrollment is now offered to high school students with Mississippi Valley State University to get a head start on college while still in high school.

“Washington County was the first in Mississippi to offer manufacturing skills as basic classes in high schools,” Errick said. “We began our first ever Delta Emerging Small Business Conference in 2019. And for first time in the city’s history, we created a re-entry program where citizens returning from prison can have a second chance at employment.”

“This is a way to let kids know they can thrive and raise a family in Greenville and the Delta,” he said. “It is a way to stop the brain drain but also create hope in our community. Not only are we creating pathways and careers, we are also creating a going-to-college culture in Greenville.”

Errick believes three major things are important to be successful in life.

1. Continue your education after high school by attending a trade school, a two-year college, a four-year-college or a graduate school.

2. Capitalize on your opportunities.

3. Contribute to your community.

“I could not have done anything without the many supporters–family, friends, employees and the community at large–working hard,” he said. “We have had some remarkable years. I’m a firm believer the promise of progress is being fulfilled by every resident, every business, every church, and every social and civic organization collectively contributing to make Greenville a better place. I’m forever grateful to be the mayor of Greenville.”

Errick is married to Dr. Temika Simmons, who currently serves as director of the Local Government Leadership Institute at Delta State University. The couple’s three children include Errick Jr., 18, a star athlete who is graduating from high school this year; Eriel, 7, and Elin, 6 months.

Errick puts a priority on spending time with his family, and loves to cook. “I take the serving position in all that I do,” he said.