Greenville native Dr. Alfred Rankins Jr., who began serving as Commissioner of Higher Education for the Mississippi Institutions of Higher Learning (IHL) on July 1, 2018, got into higher education as a career almost by chance. After graduating from Greenville High School, he went to Alcorn State University where he earned a Bachelor of Science degree. Following that, he earned Master of Science and Doctor of Philosophy degrees at Mississippi State University.

“Originally, my intent after finishing graduate school was to pursue a career in the agrochemical industry as a research scientist,” Rankins says. “However, Dr. Euel Coats and Dr. David Shaw recruited me for a faculty position at Mississippi State University (MSU). I decided to give it a try and have worked in higher education my entire career.”

While a faculty member at MSU, Rankins taught undergraduate and graduate-level courses in the Department of Plant and Soil Sciences.

“I really enjoyed teaching and watching the academic growth of students from underclassmen to seniors, and some through their graduate education,” he says. “I also served as a statewide Extension specialist with the MSU Extension Service.”

As Commissioner, Rankins oversees the administration of the eight public universities in Mississippi. He had David R. Shaw, vice president, Office of Research and Economic Development, Mississippi State University (MSU), was the major advisor for Commissioner Rankins on both his masters and doctoral programs.

“I worked with him when he became a faculty member at MSU, as well as when he was in the provost’s office as an administrative intern,” Shaw says. “I was not surprised in the least when he was named commissioner; I’ve known and seen his potential since the first time we met prior to his entering graduate school. Dr. Rankins has a tremendous ability to listen, synthesize information, and then make solid decisions based on that information, as well as his own insights and intuition.”

His experience in the system office and as a university president gives him unique insight into the strengths of the college system and what can be improved, said Trustee Shane Hooper, president of the IHL Board of Trustees.

“He knows what will work and what will not work on the campus level,” Hooper says. “This insight is very helpful to the Board of Trustees.” 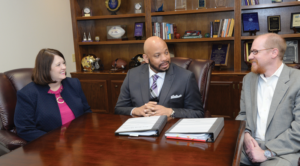 “All of us at Mississippi State University are very proud of all that he has accomplished as an MSU alumnus and former associate professor in the College of Agriculture and Life Sciences and specialist with the MSU Extension Service,” Keenum says.

Some of Rankins’ highest priorities as Commissioner of Higher Education include ensuring that all the state universities 1) maintain financial stability; 2) provide high quality and affordable postsecondary educational opportunities; 3) are recognized statewide and nationally for their significant contribution and role in advancing the state of Mississippi, and 4) partner with other state agencies and business leaders to attract more high skill jobs to Mississippi.

Some of the biggest challenges he identifies include finding stable funding streams to support the operational and capital needs of the universities, attracting and retaining faculty, staff, and administrative talent, and meeting the growing support, facility, amenity, and programming demands of current and future students in a highly competitive higher education marketplace.

In past years there has been discussion of closing some of the smaller colleges in the state in order to save money and consolidate programs. Rankins opposes closing any of the colleges, including the three HBCUs.

“I think it is critically important to keep our HBCUs,” Rankins says. “All three of our HBCUs in the IHL system provide a quality education that is assessible and affordable and do so within their own unique cultural and social environments. I believe it is erroneous to assume that if any of the HBCUs close that their students would just attend another university within the system. In my opinion, many would seek opportunities outside of the state. We have one of the lowest percentages of citizens with a baccalaureate-level degree, so the last thing we should do in Mississippi is close any university.”

Rankins is a strong advocate of the role of higher education as the solution to addressing the socioeconomic ills faced in Mississippi and to increase the state’s tax base.

“Not only does a more educated population yield higher earnings and individual income tax collections, it also yields less spending on social programs and incarceration,” Rankins says. “Our HBCUs, like our other state universities, are a sound investment for our state that give back to it much more than they receive in state funding.”

Making sure the investment students make in a college education pays off in the form of good employment opportunities is a focus of the college system. Rankins said they work with the business community to make sure they offer and adjust curricula and equip students with both hard and soft skills needed to meet the current and future human capital demands.

“We need a stronger focus on attracting more high skill and high paying jobs to our state,” Rankins says. “Students live and work where they have opportunities to do so, and we must create more opportunities for them right here in Mississippi.”

“I just come to work every day with the overarching goal of utilizing our strengths and improving our weaknesses to make our university system and state better,” he says.

As the 19th president of Alcorn State University, Rankins focused on steering students at the university to excel in academics and athletics. During his four years at Alcorn, he oversaw the university enrolling its largest freshman class in history, and increasing the average ACT scores of entering freshmen for three consecutive years. The university achieved it highest ever ranking by College Consensus as the #7 best HBCU and #1 best public HBCU in the nation.

Rankins was also credited with helping the university establish new academic programs and making important discoveries through its research. Alcorn received national recognition for its commitment to the student experience. And, in athletics, Alcorn has won several conference championships and a national championship, while graduating student-athletes in record numbers.

As president, Dr. Rankins was also credited with completing major capital projects and overseeing projects to improve campus infrastructure. In addition to the 1,700-acre Lorman campus, the university also includes branch locations in Natchez and Vicksburg.

Rankins grew up in the Delta, and recalls his childhood in Greenville with fondness.

“I loved growing up in Greenville,” Rankins says. “There were a lot of kids in my neighborhood, so pick-up games of basketball, sand lot football, and baseball were a stable of my childhood. Most of the kids in my neighborhood were older than me, so that forced me to be a little tougher and a bit more mature for my age.”

He comes from a tight knit family. His role models are his parents, Mary and Alfred Rankins Sr., and his deceased maternal grandfather, George Lee White.

Rankins said his family has always supported his career endeavors and are a source of inspiration for him. His main recreation is supporting and watching his teenage daughter, Aftyn, and teenaged son, Alfred, participate in their school athletics, and being involved in church activities with his wife, Juandalyn.