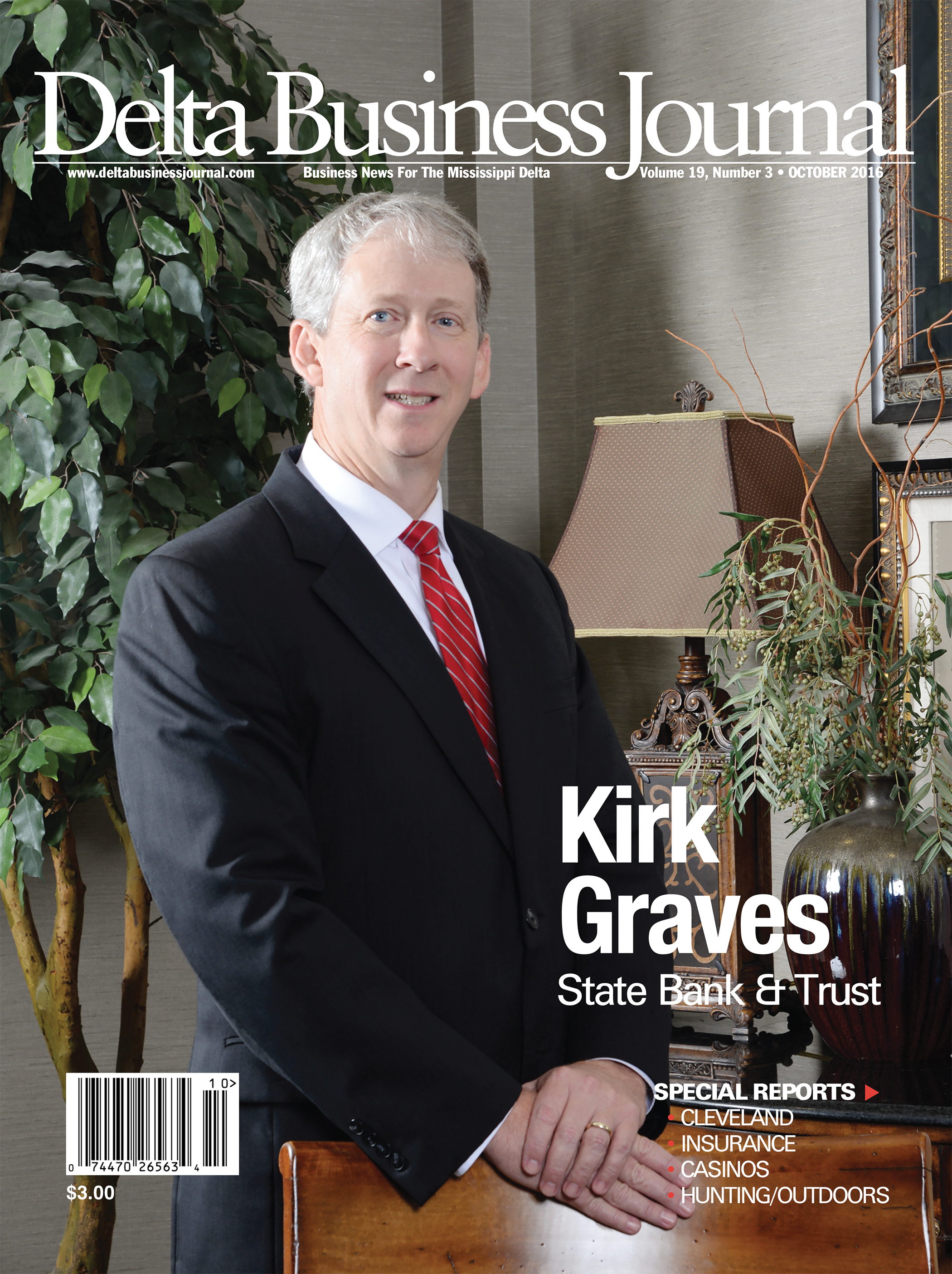 The Valley Bank, which is now State Bank & Trust Company, had modest beginnings in Rosedale in 1898. By 1985, it had grown to only $13 million in total assets.

When Stewart Brumfield and S.R. Evans bought a controlling interest in the bank in 1985, it wasn’t in the best of shape.

“It was pretty much in a cease-and-desist mode,” says State Bank & Trust CEO Kirk Graves. “A de novo bank is starting from zero. They had to work hard to get back to being a de novo bank.”

Brumfield worked for years at First National Bank in Greenwood, which later became Trustmark Bank. He was a big supporter of Delta businesses and people, and a firm believer in warm Southern hospitality and hometown banking.

“That is a tremendous story,” Graves says. “At that point, he saw the need to expand his footprint to markets other than the Delta. In 2000, Valley Bank merged with State Bank & Trust in Brookhaven. That put us at a $400-million bank, and really set the stage for the growth we have seen since then. From 2000 until now, we have bought several banks and branches to become a $1-billion bank in three states with 35 locations. We expanded into Louisiana in 2005, and into Alabama in 2007.”

Graves has been along for a large portion of that growth, joining the bank in 2002. The years since then have seen a trend towards mergers and acquisitions in banking across the country.

“To obtain the economies of scale to offset overhead, administration and compliance costs, you need to continue to grow,” says Graves, who became CEO in early 2016. “As compliance issues become more burdensome, growth and efficiency improvements are the only ways to offset the extra expense.

Graves grew up in a banking family. His father was a banker in Natchez for more than 50 years.

“My first job at 13 years old was at Britton & Koontz Bank in Natchez as a coin wrapper,” Graves says. “In high school, I worked after school doing whatever needed to be done at the bank. Though college, I was a teller during summers. That turned into a pretty good job for a college kid. It gave me a lot of experience dealing with people. Being a teller is the most underappreciated job I know of. It carries a lot of responsibilities. Tellers are the face of the bank and are often overlooked. I’m trying to do a better job of recognizing what our front line staff does for us.”

Graves graduated from Ole Miss with a BBA in 1986 and a MBA in 1990. He has earned both the CPA and CFA designations.

His first full-time job after college was at Eastover Bank for Savings, which was eventually acquired by Sunburst Bank. He also worked for Trustmark Bank for eight years before joining State Bank & Trust.

One thing that hasn’t changed as the bank has grown is the emphasis on relationship banking, making each customer feel valued.

“Improving our customer service from the teller window to the back office is a real point of emphasis for our bank,” Graves says. “We have found when people bank with us, they like us. They love the bank employees visiting with them. We can help by giving our front line more tools, making their job easier to sell the bank and not getting bogged down with getting documents filled out. We are focusing on making their jobs easier and more efficient.”

It is difficult to compete with the really large banks and still maintain that small bank feel. Graves says it comes down to people.

“We have very good people who truly enjoy taking care of their customers in our communities,” he says. “For people to bank with us as opposed to banking with a Chase, it comes back to customer service. A lot of the things banks offer are commodities; you can go to any bank and get a checking account or a loan. All banks will say they differentiate through customer service. We have a tremendous amount of talent for a bank our size.”

Doug Bullock, chief operating officer of State Bank & Trust, says Graves is a visionary and confident in his grasp of all aspects of banking and the financial markets.

“He is conscientious, passionate, an excellent communicator and has sincere feelings for the wellbeing of the bank employees,” Bullock says. “He has several leadership characteristics that most chief executive officers don’t have in that he is very approachable, patient and, most of all, he is a really good listener. He is humorous and can easily laugh at himself with others. Mr. Graves is the consummate professional, extremely ethical, honest, with a ‘consensus builder’ management style.”

Success in banking today relies on staying current with technology. More people are doing banking online. Graves thinks the days of having a bank branch on every street corner will diminish over time. But there will still be the need for a physical facility.

“Most people in Mississippi, Alabama and Louisiana still want a bank they can walk into,” Graves says. “There will still be a place for a teller, although technology will continue to evolve. I think you will see at those jobs, their eight hours will be spent a little differently. But at the end of the day, hands-on customer service will still be a vital part of banking.”

Millennials today are handling money differently than their parents. They want to be able open an account online, direct deposit payroll checks, and bank using their phones. They primarily use debit cards, not cash. They have no need to walk into a bank.

“You must have the technology to compete,” he says. “We have done that. And we are continuing to try to find better ways to attract millennials.  It is a tremendous challenge for all banks.”

Having a three-state footprint is a strength of State Bank & Trust, but it also brings additional challenges.

“Some of our markets are very different from others,” Graves says. “Some are traditional community banks. Some are primarily commercial. And the Delta has a lot of agriculture exposure. Those markets have to be managed differently, but each one has a unique role in the total makeup of our bank.”

There has been a downturn in ag commodity prices. Although it is a concern for all banks in the region, Graves is confident in his team.

“Wayne Harris, our North Mississippi regional executive, and his team that manage our agricultural portfolio have done a great job,” Graves says. “Even though overall the ag sector has not performed well, our portfolio has remained strong. Our credit quality overall is in the best shape it has ever been. Our President and Chief Credit Officer Lee Seago and our lending team have done an amazing job.”

The historic flooding in South Louisiana in early August affected the bank’s Denham Springs’ office, which was flooded. Several employees there were directly affected.

“It has really been a sad situation,” Graves says. “We had one employee who lost her home in Katrina, and now 11 years later lost her home again. In both cases, she had to get out of her home by boat. That was truly a sad deal.”

State Bank & Trust helped out after the flooding. In addition to providing water and meals outside of their branch, the bank was one of the first in the area to open a temporary banking facility after the flood.

“We just want to do the right thing,” Graves says. “In a lot of ways, it was worse that Katrina because a lot of people didn’t have flood insurance. Our Louisiana team, led by Michael Brumfield, our Louisiana CEO, have really stepped up for our employees and our customers.”

Graves is married to the former Susan Stork, and they have two boys, Spence, 15, and Sam, 12.

“Both of them are very involved in sports and we spend a lot of time following those activities,” Graves says. “We also enjoy going to Ole Miss football games.”

Graves says his Christian faith is the most important thing in his life and is what he leans on in how he manages the bank. He and his family are members of the First Presbyterian Church in Jackson. He is also on the board of directors of the Methodist Children’s Home, which serves neglected children throughout the state.

“We take very tough cases from a child’s standpoint,” Graves says. “It is a tough ministry taking in children who have been really abused and neglected. These are heart wrenching stories, and we see successes that are truly miracles. It is really rewarding to be involved with.”