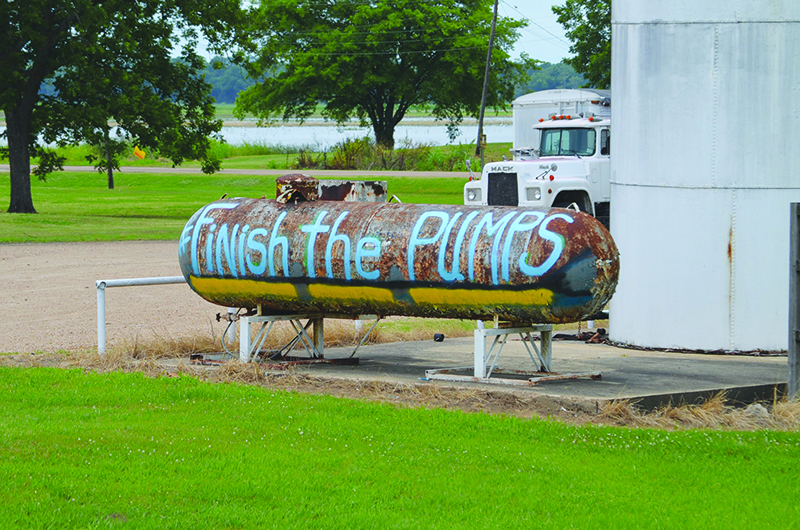 By Becky Gillette • Photography Courtesy of the Mississippi Levee Board

A repeat of the type of catastrophic Mississippi River flooding seen a year ago would be extremely devastating to families, farms and businesses still struggling to recover from the flooding that inundated hundreds of thousands of acres of prime cropland during most of the growing season in 2019.

There have been large amounts of rainfall again early this year in states that drain into the Mississippi River.

“Mississippi River levels and the Yazoo Backwater levels were worse in January 2020 that in January 2019,” says Chief Engineer Peter Nimrod of the Mississippi Levee Board based in Greenville. “The Steele Bayou Structure gates were closed on January 14. The Backwater crested at 93.3 feet, which was inundating 380,000 acres including 125,000 acres of crop land.” The Mississippi River finally started falling significantly in early February and the Steele Bayou gates were re-opened February 2. But then there were torrential rains (six to eight inches) in the Mississippi Delta and the Ohio River Valley that may cause the Steele Bayou gates to be closed again due to rising river levels.

It was predicted the river would rise to 48-49 feet at Vicksburg by the end of February, which is only a few feet less than the 2019 crest. The levels in the Yazoo Backwater Area (YBA) were predicted to rise to 94 feet, just a few feet short of the 98.3-foot crest in the YBA in 2019.

Clay Adcock, a Holly Bluff area farmer, had been trying to be optimistic about the unlikelihood of catastrophic flooding two years in a row. But he was alarmed by the amount of rainfall in February.

“Our concern would be a repeat of this past year,” says Adcock. “It would be really devastating having it two years in a row. A lot of people wouldn’t survive financially. We have got to have the Yazoo Backwater Pumps to help our area. We sent a guy to the moon, so surely we can figure out to help everyone up and down the Mississippi.”

Nimrod says it is not good when the river is up at flood stage before the normal March, April and May spring rainfall.

“We will be watching weather patterns over the next few months to see what the Mississippi River will do and if we are going to have another significant Backwater Flood,” says Nimrod.

The Mississippi River usually experiences a spring rise every year along the mainline levee that may or may not reach flood stage, and does not usually cause any major problems unless it goes well above flood stage, said Chief Engineer Bruce Cook of the Yazoo-Mississippi Delta Levee Board.

“We have noticed a change in the timing of the rise along the Mississippi River since around 2015, and this 2020 spring is looking the same,” says Cook. “Since 2015 the river has been rising a little earlier than what we have seen previous to the year 2015. We have been seeing a rise that starts in late December to early January.  Previous to 2015 we would usually see a spring rise that would start around the end of February to the first part of March. Our area has been receiving above-average rainfall for the past few seasons contributing to an earlier rise and frequent flooding.”

After May, the area is usually out of the woods when it comes to high water. Most people who live along the mainline levee system do not worry as much about the flooding as the people who live in the interior areas in the South Delta.

“The people in the South Delta have been suffering with highwater for at least four straight years,” says Cook. “The most important thing that we all can do to help the flooding is to finish our flood control projects. The Mississippi River and Tributary Project is less than ninety percent complete and the Backwater Pumps have not been built.  Both levee boards are currently working on getting the backwater pumps back on track to being finished.”

Building the Backwater Pumps would help reduce flooding in the South Delta tremendously. Cook said the Delta will not fully realize the full benefits of flood control without having a completed flood control project.

“We need to work hard to complete flood control projects and do the needed maintenance to make sure that we can prevent as much flooding as possible since we are seeing flooding more frequently and for longer durations,” says Cook.

Farmers Victoria Darden, twenty-eight, and her father, Randy Darden, seventy-three, were out of their homes located south of Rolling Fork for more than six months in 2019.

“We have a 1,100-acre farm and the only things that weren’t flooded were our houses,” says Darden. “We were surrounded by water from March 6 until late August when the water receded. We were completely isolated. We had to boat in and out. Someone had to stay behind because my father’s house has a levee around it and someone had to pump the water out.”

While they received disaster assistance from the 2019 floods, it didn’t come close to covering all the losses.

“Just because you are not farming doesn’t mean the bills stop coming in,” she says. “We are a very ag based community and we suffered greatly by not being able to have our farmers bring in the revenue they normally earn. All the businesses in our area suffered the effects of that. It was devastating.”

“Many people still don’t know about it,” says Darden. “People don’t have a clue about the hardships suffered from the Yazoo Backwater flooding. It is very troublesome because we need public support to get the Yazoo Pumps built. The Yazoo Pumps are a very urgent need. We needed them a year ago. We can’t do without them. It is an absolute necessity.”

The Yazoo Pumps would allow the Backwater area to be pumped out during times of high river levels. The project was vetoed by EPA in 2008. Sen. Roger Wicker said EPA made the decision that overrode the congressional authorization for the project based on inaccurate claims about potential harm to the Delta’s ecosystem.

“The agency’s veto left the region unable to move forward with a project that would save lives, property, and habitats,” says Wicker. “I am working with EPA to reverse its 2008 mistake and allow this effort to move forward. I am also pursuing legislative options.”