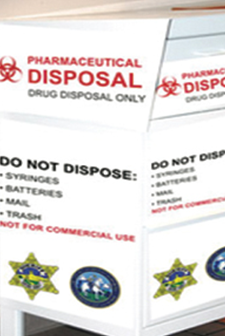 There are growing environmental concerns about the improper disposal of pharmaceutical drugs and household personal care products, said Robbie Wilbur, communications director for the Mississippi Department of Environmental Quality (MDEQ).

“MDEQ encourages the proper management of pharmaceutical wastes and discourages flushing of household medications and other similar products down the toilet or sink,” Wilbur said. “MDEQ helps promotes the biannual collection events sponsored by the U.S. Drug Enforcement Administration (DEA).  The DEA works with numerous local law enforcement agencies throughout Mississippi and the country to host local one-day collection events for prescription drugs and other pharmaceuticals. “

“MDEQ has developed a brochure promoting the program and the various drop-off locations are available on the MDEQ website and distributed at various health fairs and public events,” Wilbur said. “The next National Prescription Drug Take-Back Day is April 29.”

Residents can bring unwanted prescription and over-the-counter drugs, vitamins, and other similar medicinal items (liquid or solid form) to any of the participating locations so the drugs may be disposed of safely.

Unused prescription drugs are not just a danger to the environment and drinking water supplies, but also to people in the household who have access to the medicines. There is particular concern with potential of opiate painkillers to start with someone taking medicine prescribed to another person in the household.

According to the DEA, the majority of prescription drug abusers report in surveys that they get their drugs from friends and family.

“Americans understand that cleaning out old prescription drugs from medicine cabinets, kitchen drawers, and bedside tables reduces accidents, thefts, and the misuse and abuse of these medicines, including the opioid painkillers that accounted for 20,808 drug overdoses—78 a day—in 2014 (the most recent statistics from the Centers for Disease Control and Prevention),” the DEA said. “Eight out of 10 new heroin users began by abusing prescription painkillers and moved to heroin when they could no longer obtain or afford those painkillers.”

There are indications are that more and more Americans are participating in the drug take-back programs. In 2016 Americans turned in a record amount of unwanted medicines, almost 447 tons compared to a previous high of 390 tons in the spring of 2014. That included 4,494 pounds of drugs collected in Mississippi. There were about 5,400 drug take back sites across the country.

“These results show that more Americans than ever are taking the important step of cleaning out their medicine cabinets and making homes safe from potential prescription drug abuse or theft,” said DEA Acting Administrator Chuck Rosenberg.  “Unwanted, expired or unused prescription medications are often an unintended catalyst for addiction. Take-back events like these raise awareness of the opioid epidemic and offer the public a safe and anonymous way to help prevent substance abuse.”

The Associated Press has reported that a large number of different types of pharmaceuticals including antibiotics, anti-convulsants, mood stabilizers and sex hormones have been found in the drinking water supplies of at least 41 million Americans. AP said that while utilities say the tiny concentrations of these chemical are not of concern, the presence of so many prescription and non-prescription drugs is causing concerns among scientists about long-term consequences to human health.