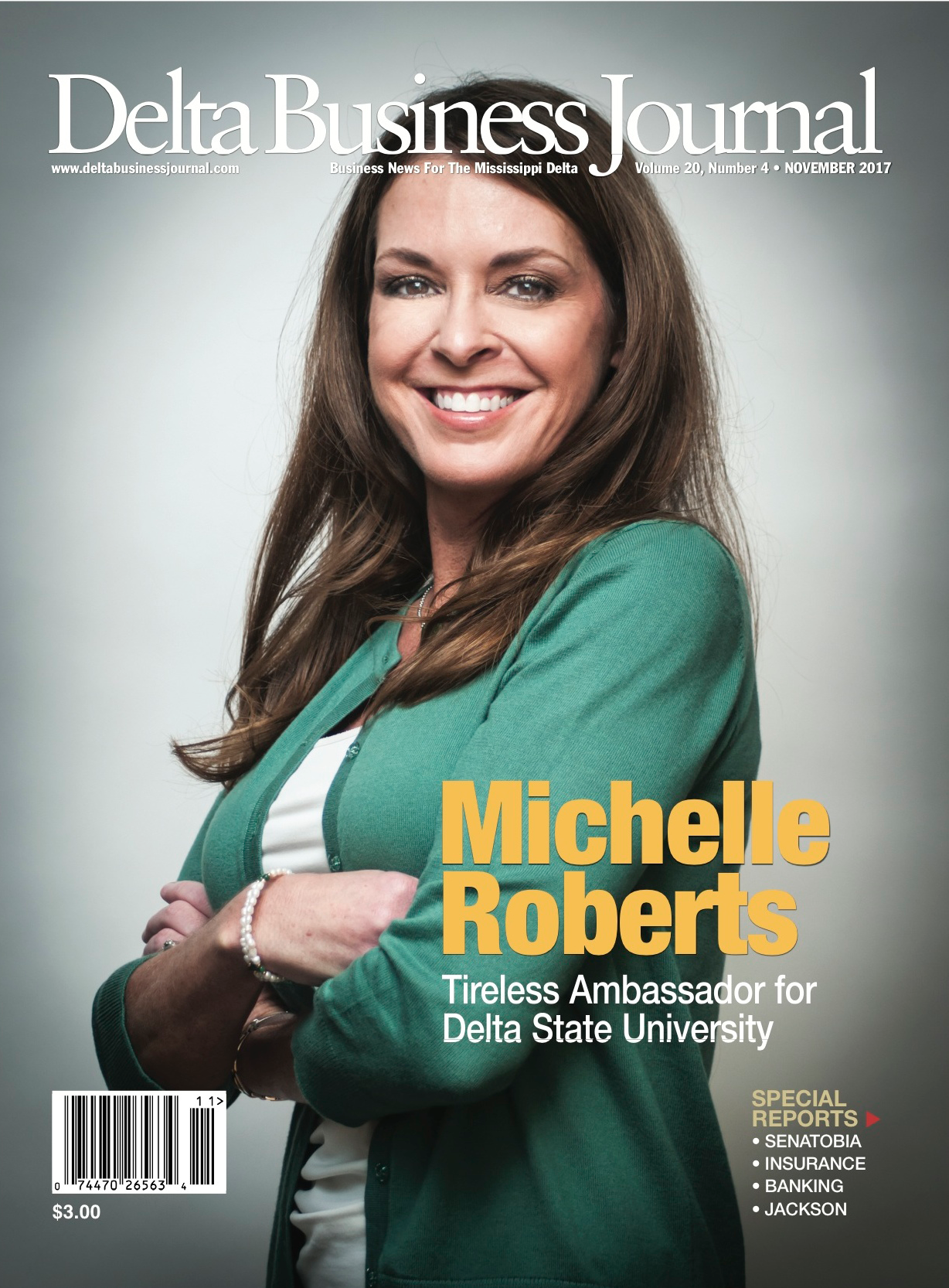 Dr. Michelle Roberts, who was the first female vice president of Delta State University (DSU), always wanted to be in education. In elementary school, she would take home the assignments and materials left over at the end of the school year so that she could “play school” during the summer.

“I thought I would be a math teacher because it combined my love of numbers with my love of teaching,” Roberts said. “But, in college, I began to explore other subjects and became interested in accounting and computers. I chose to double major in those two subjects until my senior year when I had to take the infamous John Quon for cost accounting. When I could no longer avoid his class, I changed my major to management and computers.”

After completing a bachelor’s degree in business administration at Delta State, she contemplated going to law school. She made this decision very late in the process, and so she decided to get a job while she took the Law School Admittance Test and went through the application process.

Roberts is currently vice president for executive affairs and chief of staff for President Bill LaForge.

“Dr. Roberts is a very valuable member of the DSU leadership team including service on our executive committee and on the cabinet,” LaForge said. “Her longevity at the university, the variety of professional roles she has played, and her very valuable institutional memory all serve her well in her current position. She has a depth and breadth of experience and knowledge that are very valuable to the university. As a key policy maker, she is a terrific resource on university policies and practices, and she helps coordinate the work of our executive committee, the cabinet and the president’s office itself.”

LaForge said Roberts’ unwavering allegiance to DSU is reflected in her strong work ethic and willingness to go the extra mile time and time again.

“She has a terrific drive to make sure things are done well and right, and inspires others because of that,” LaForge said.

Shelby Holcomb, a junior at DSU who works with Roberts, finds her incredibly organized and always on top of whatever she is doing.

“She is a really good motivator, as well. I would say she is the behind-the-scenes president because she helps everyone, not just the president,” Holcomb said. “She is involved in almost everything on campus. She remembers faces and names much better than I can. She is very supportive and a big team player. She is also very caring. She is just a great people person. This job is just perfect for her.”

Roberts, who grew up in Belzoni, first worked as a research analyst in the Office of Institutional Research and Planning during Dr. Kent Wyatt’s presidency. This job entailed organizing and analyzing institutional data and statistics, which was a great fit for her love of numbers. Over the next few years she was promoted to coordinator and then to director of the department. During this same time period, she also taught computer courses, and eventually earned the rank of associate professor in business.

“It was also during this timeframe that I decided to continue my education,” Roberts said. “I completed my master’s degree in business administration in 1994 and my doctoral degree in education in 1996, gaining the distinction of being the youngest doctoral graduate in the university’s history at age 26. I was promoted to chief information officer by President David Potter in 2000, and was named executive assistant to the president in 2004 by President John Hilpert. I served in that role until 2009, at which time I was promoted to vice president for university relations.”

In her current job, some of her responsibilities include: working with the President in formulating strategy for the university; advising the president on policy, procedural, operational, and organizational issues; representing the president to the other vice presidents, campus officials, and external constituents; serving as a liaison with internal and external audiences for the communication and implementation of the president’s priorities; developing and implementing projects at the request of the president; and, managing the timely and successful completion of initiatives that cross organizational lines.

“The part of the job I enjoy the most is working with President LaForge and our great executive team — Dr. Vernell Bennett, Dr. Charles McAdams, and Mr. Jamie Rutledge — as well as the superb staff members in the President’s Office — Ms. Claire Cole, Ms. Ann Giger, and Ms. Joyce Hackler — to develop and implement projects and activities that help our students have a meaningful experience at Delta State and help this university to continue to grow, flourish, and be successful,” Roberts said.

The biggest challenge she faces in her job is having the time and resources to accomplish everything needed. DSU operates with a very lean staff and budget, and therefore everyone has to wear many hats.

“People often tease me about working too much — they see my vehicle at the office after hours and on weekends,” she said. “But, when you love what you do and believe in what you do, it’s hard not to give it your all. Delta State is truly a unique place with amazing people, and I am fortunate to have spent my career at my alma mater.”

These are troubled times for higher education in Mississippi because of state budget cuts. Along with the other seven Mississippi universities, Delta State did not receive state funds via a bond bill for major campus improvements, and did not receive annual facility repair funding from the state. DSU received a $2.2 million reduction in operating funds from the state.

“For the first time in history, state funding is no longer Delta State’s largest source of operating revenue,” Roberts said. “This year, we will derive less revenue from the state than from tuition. It’s very frustrating when you have so many wonderful things taking place at Delta State that are being overshadowed by the state’s budget situation.”

In her free time, Roberts enjoys running and workout routines in the Fitness Center. Earlier this year, she ran a marathon in Louisiana and a half marathon in Arkansas.

“My goal is to collect running medals from all 50 states, and to explore the U.S. in the process,” she said. “I used to be an avid golfer, and one of these days, I hope to dust off my clubs and my swing and get back on the golf course.”

She also credits wonderful friends who work very hard to her keep her personal life balanced with her work life.

“Whether it’s a trip to Cabo or Alaska, hanging out at my pool, dinner at one of our favorite dives, or just fun day trips, they make sure I make time for them and for me,” Roberts said.

On the personal side, she feels blessed with a wonderful family. Her parents, Sam and Micky Roberts, are in their 80’s and still live in Belzoni.

“They keep me busy with fun daughter duties and projects, keeping them connected with Facebook, and making sure each of their Kindles are in good working order,” Roberts said. “My dad and I published a 100-plus page book a few years ago entitled Sam’s Stories and Tall Tales that chronicles the many adventures he has experienced in life.

“Despite his being 83, I think we may have to publish a second book in a few years. My older brother, Bo, is a principal at Kossuth Middle School, and he has three amazing children: Luke, 17, Anna, 14, and Landry, 6. My promise to the three of them is a trip anywhere in the United States at age 13, and an international trip of their choosing when they complete college. So far, we have traveled to Washington, D.C. and New York City, and I look forward to continuing to make memories with them for many years to come.”

All Posts »
PrevPreviousNew Book Celebrates First 100 Years of UM Business School
NextTourism Advertising – Why Mississippi and our elected officials should invest in its future.Next