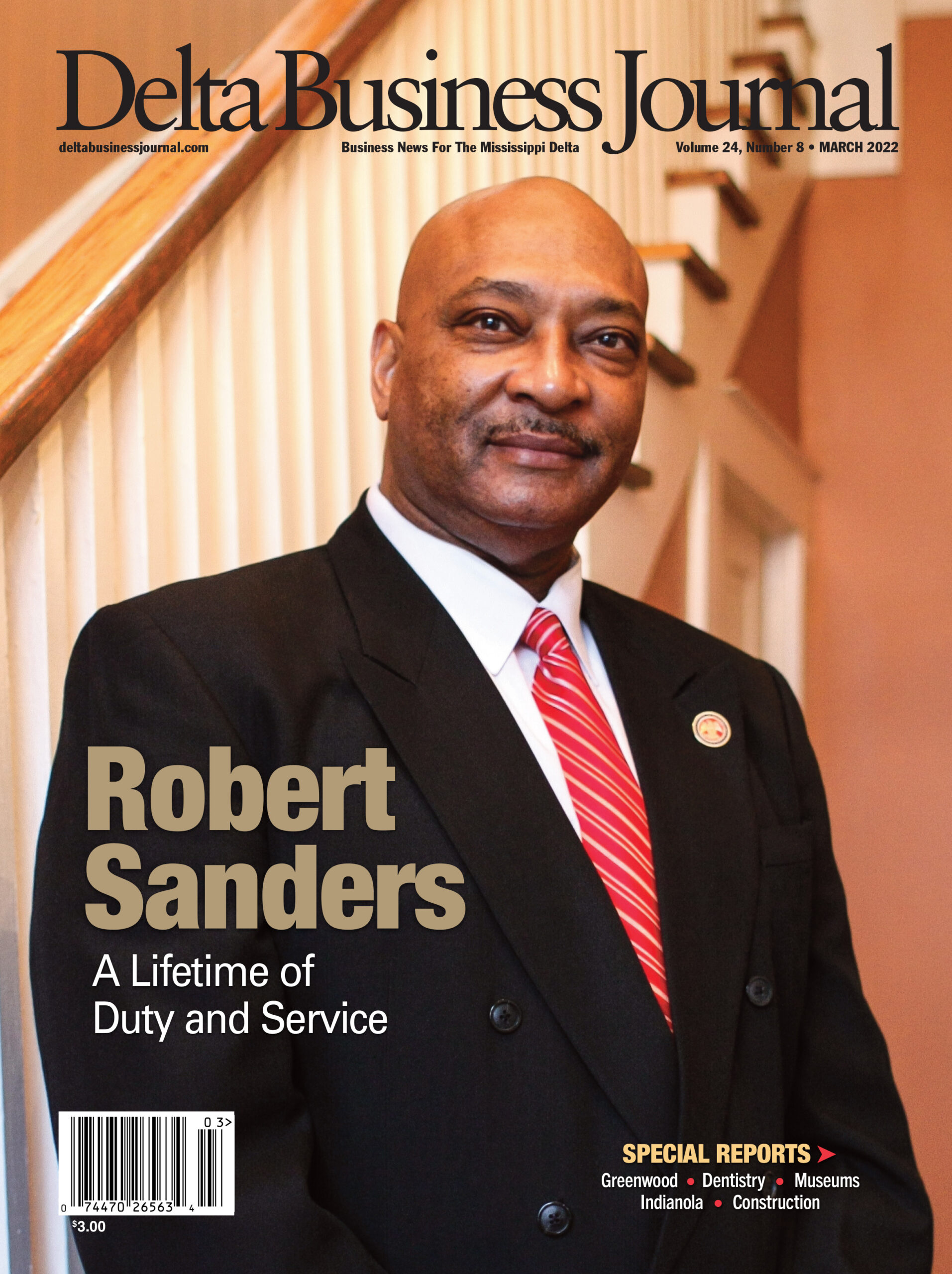 No Cliche’: A Lifetime of Duty, Service and Dedication

The newest member of the Mississippi House of Representa-tives used to be in control of security at the state Capitol. And a basketball coach. And a police officer. And a professional athlete in Europe and South America. In fact, there’s not much this man has not done in the spirit of giving back during his long, professional career.

Democratic Rep. Robert Sanders of Cleveland took his oath of office during a small ceremony in the House chamber this past November. He had previously served as Sergeant-At-Arms for the Mississippi Senate from 2000 to 2004. Sanders succeeded former Rep. Abe Hudson of Shelby, a Democrat who resigned in late August from the District 29 seat in Bolivar and Sunflower counties.

The Shaw native and Cleveland resident will serve the rest of the four-year term that ends in January 2024. Upon his election, Sanders said that he intended to continue serving as a member of the Cleveland Board of Aldermen while serving in the House, which is allowed under state law because both jobs are in the legislative branch of government.

In addition to working as Senate sergeant-at-arms, Sanders has been police chief for the City of Shaw and for Mississippi Valley State University as well as an officer for the Cleveland Police Department and boys’ basketball coach in Mound Bayou. Service has been the common denominator throughout Sanders’ career.

“The eldest of two boys, I was born in Shaw, MS to Percy Lee and Nancy Sanders on December 20, 1963,” says Sanders. adding that his father was a farmer. “I graduated from Shaw High School with my diploma and matriculated through and graduated from Mississippi Valley State University on a full basketball scholarship. We grew up poor and, I think, coming up that way has always influenced me to work harder and always do more. During high school, I worked at a gas station there in Shaw owned by Mr. Bernardi and my immediate boss was Mr. Langston, owner of Langston Homes. Upon graduating from college, I played professional basketball in both Europe and South America (Argentina) after spending some time in camp with the NBA’s Indiana Pacers. It was during that same time that I married my wife, Tracey.”

Sanders set many college basketball records while playing at Valley as both a forward and center and continued to be successful in the foreign leagues he played for during the next several years. One of his peers while at Valley was the soon-to-be-legendary Jerry Rice. “But I was actually the big athlete on campus before Jerry!” laughs Sanders.

“I moved back to the United States after learning that my grandmother—also named Nancy like my mother—who played an intricate part in raising me, was ill,” continues Sanders. “I landed a job teaching and coaching at my Alma Mater, Shaw High School. Then, I  began working at the Bolivar County Sheriff’s Department as a dispatcher and decided that I wanted to further my career in law enforcement so I enrolled in the MS Police Academy and graduated. Upon graduating, I became a Deputy Sheriff.”

Sanders has served over twenty-eight years in law enforcement and twelve years in Municipal Government—an impressive record, no doubt. “I’ve served in the following capacities during my career: Cleveland Police Officer, SRO Officer, Teacher and Coach in Mound Bayou, MS, Chief of Police of the City of Shaw (twice), Sergeant at Arms for the MS State Senate—recruited by my old friend, former Lieutenant Governor, Amy Tuck—an Investigator for the MS Department of Internal Affairs, and Chief of Police for Mississippi Valley State University,” says Sanders.

“I currently serve as City Councilman for the City of Cleveland for Ward 2 and as the MS State Representative for District 29,” he continues. “Through the years, I have accumulated thousands of law enforcement training hours, municipal training hours and other continuing education hours, all to ensure that I am staying abreast of changes to be totally certain that the citizens that I serve are receiving the most up to date knowledge and results. I think that my dedication and commitment to service has been consistent as I have always strived to give back, in a meaningful way, to the city that I was raised in, the county that I reside in, the University that I attended, and the State that I am fortunate to call ‘home.’”

Sanders is the Senior Deacon at Pilgrim Rest Missionary Baptist Church in Cleveland where he has been a devoted member for over thirty years. And he still plays a few pick-up basketball games now and then to keep in shape and have fun.

“My beautiful wife of thirty-five years, Tracey, my awesome children, Stephanie, Cortelius, Robyn, Krystal Brittney, Alexis, my amazing grandson, Treyson and amazing granddaughter, Rylie all give me an immense amount of joy that can’t be put into words,” says Sanders. “I enjoy spending time with my one and only sibling whose name is also Tracy. There is nothing more important than time spent with family and that’s what I love to do in my spare time when I have it.”

Upon reflection on his life, Sanders says, “I came from very humble beginnings in Shaw here in the Delta. I went to school and worked hard to obtain a scholarship to college. My mother and grandmother didn’t have a lot of money, but they did the absolute best that they could—for which I am eternally grateful—so I knew that basketball would have to be my ticket to college as a 6”6 player. I was so excited to attend Valley.  At the time, my cousins and I were known as ‘The Sanders Boys.’ We all played sports and all are inducted into MS Valley’s Hall of Fame today.

“I remember arriving on Valley’s campus as an impressionable freshman with all of my belongings in a brown paper bag,” recalls Sanders. “Valley has truly been instrumental in making me who I am today. I am forever grateful for all of the opportunities that were provided to me as a student-athlete and even now as an active Alumni. Valley’s motto of ‘Live For Service’ has truly helped to shape my life in ways that I find hard to put into exact wording.’

‘My entire life’s work and purpose has consistently been dedicated to the commitment and devotion to projects and purposes larger than myself,” says Sanders. “As a public servant, it was simple: all I ever wanted was to be there and available for others, to be that person that I wished that I had growing up. ‘For to whom much is given, much is required’—that saying is so true.”

My values are not just abstract ideals—they are also personal,” adds Sanders. “As I’ve said before, I know what it feels like to grow up not having much. My mother and grandmother, like many other elderly folks, were able to live independently in the home that they owned for over forty years and were able to raise us because of government-funded assistance programs. My teachers in Shaw and at MS Valley State were the ones who propelled me forward toward greater things and aspirations and, because of that, not only do I pay homage to them, I want to ensure that they are receiving a sustainable living wage today. In addition, as a product of an HBCU, I know how meaningful that experience was to me and in that same manner, I want to make sure that our HBCU’s continue to receive the funding that they need to produce our next generation of leaders.”

One issue of extreme importance to Sanders is health and medical care availability. “I place a high emphasis on health care,” he says. “It’s not only about affordable healthcare—It’s about access to healthcare for those in rural areas. It’s about the quality of care that’s received during our most vulnerable times. I have a daughter whose family moved out of Mississippi eight years ago in search of something ‘better’ for their child. Being totally honest, that did not sit well with me. Instead, it made me take a self- inventory and ask myself what I could do to be the change that I wanted to see, so I went to work.”

“I value our children and young adults and as they enter their next phase of their lives post undergrad,” adds Sanders. “I certainly don’t want them to feel like they have to leave our state in pursuit of  something better. I want us—and them—to be able to grow up so that millennials will be able to live and play in their own backyards. I want them to consider staying here in Mississippi when they graduate. With all that said, it is my hope that we can bring more jobs—but not just any basic job—that will be in line with the degrees that our young adults here in the state are obtaining. I want to partner with community colleges regarding certification programs so that those who desire to go into the workforce will have partnerships and resources that they need to help them find employment, because workforce jobs are indeed meaningful and necessary—and often pay very well.”

Sanders goes on to say that, “Being in this capacity means that I was the one that was given a seat at the table to advocate for every single person in my community. It’s having that one opportunity that you can’t blow because if you do, the entire community will be affected. It’s like going on a game show and feeling the pressure of not getting the answer right because if you lose, the money that you were going to receive will not only have benefitted you, but it would have benefitted the entire family. So when I lose, I am not the only one that loses—everyone does and, as an athlete who loves a good challenge, I know that no one wants to lose, especially when those that they love and value will also have to feel the loss. Unfortunately, the reality is that there will be losses, but that is when we dust ourselves off and get back in the game. That is why I strive diligently to study as much as I can to improve myself. So, to sum up. I ran for office because I believe in the place that we call home. I am not afraid to speak up and out for families that may feel left behind, because we all deserve to be seen and heard and have a voice. Regardless of obstacles and forces that may be determined to divide us, one thing I know for sure is that we are better together. Real community change starts with respecting and understanding what’s important to the community and the people who live and work there.

“I understand the plight of those whom I serve so from a perspective of empathy,” adds Sanders.  “Not only do I think of me and my own family, I think about every single person that I am privileged to serve and have known throughout my career. I do not take lightly the opportunity to put in the work for those who have entrusted my ability to do the hard work.”

Sanders says he is always accessible.

“There is not a single person who calls me with a concern or a problem that I don’t then try my best to resolve,” says Sanders. “I have a consistent track record of showing up when called upon. I also believe that honesty and transparency are the keys to building trust—I don’t make promises that I know that I can’t keep, but I am always in constant pursuit of being better for all—family, constituents and friends. You can always count on me to do my due diligence through research and preparation and I’m always open to having those tough conversations. Because, truly? That’s what makes us all better, collectively.”