When a “Shark” Accepts the Bait 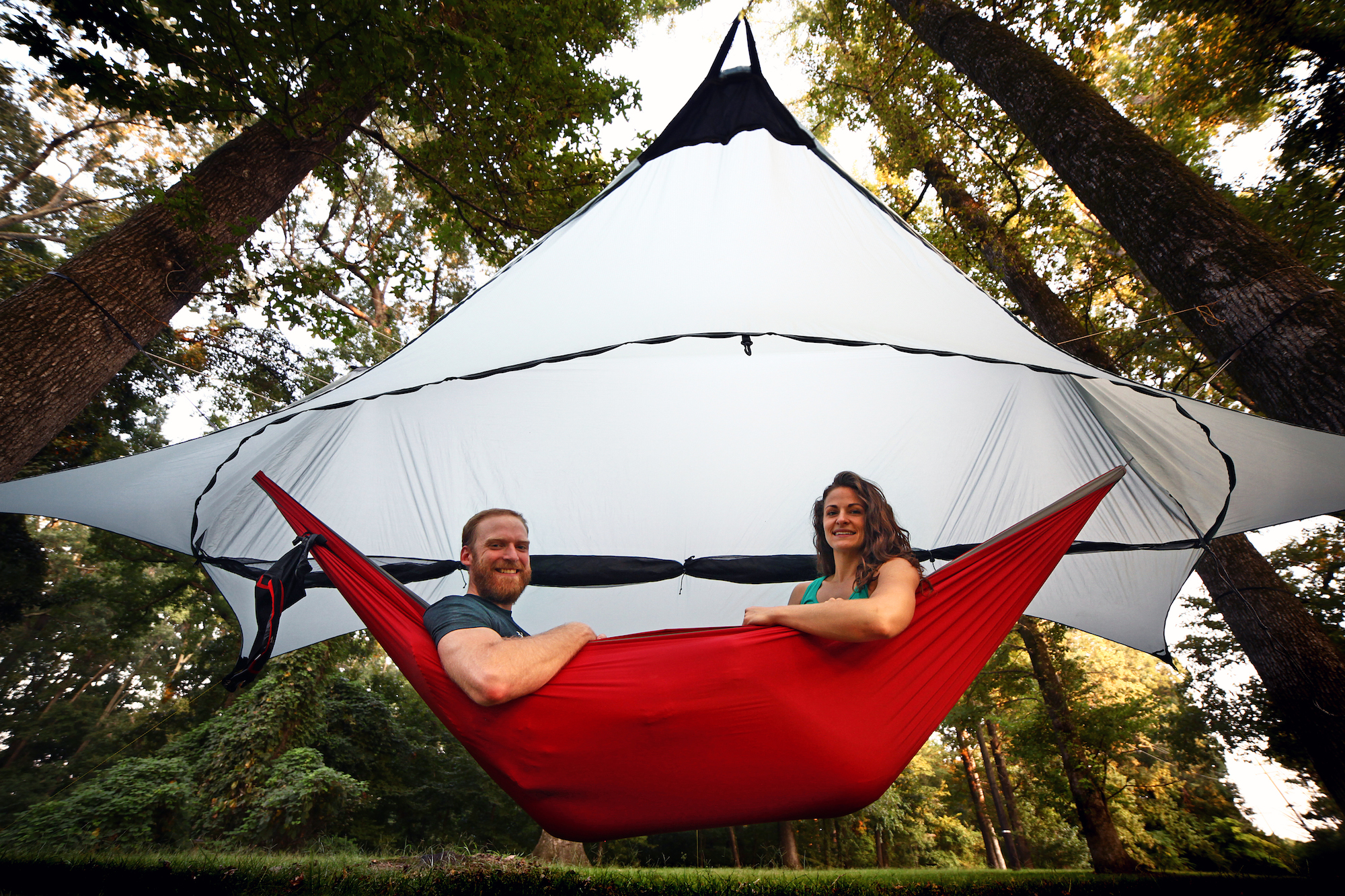 Get Ready for the Adventure of a Lifetime!

Vicksburg natives, Richard and Juli Rhett, owners of Sierra Madre Research, a company that creates innovative, high quality camping equipment, such as hammock shelters and other accessories, were on the season premiere of ABC’s “Shark Tank,” the show where entrepreneurs try to convince wealthy investors (Sharks) to buy a stake in their budding companies.

The Rhetts walked away with the sweet deal they’d asked for: 15 percent of their company for $175,000. Richard Rhett says he and his wife Juli received an amazing blessing when they attracted the attention of one of the producers of the show.

“Our appearance on the show originally began with an email from one of the executive producers,” Rhett says. “I’m not sure how, but one of our products ran across his computer screen and he was intrigued, so he reached out and contacted us about being on “Shark Tank.” And of course we said, absolutely.”

The rest as they say is history. The Rhetts went through the process and once on the show, caught the attention of English business magnate, Richard Branson, founder of the Virgin Group, a conglomerate that controls many companies.

“Richard Branson was a guest shark on Season Nine and he actually only did one day of filming and we were thankfully on that day,” Rhett says. “We pitched to him, Mark Cuban, Lori Greiner, Robert Herjavec and Daymond John. Richard made the investment, which was exactly what we asked for, $175.000 for 15 percent of our company, and he went a step further by dedicating any profitable distributions that he receives from the company to go back into drilling clean water wells. And that was a cool confirmation that it was a really good decision to work with him.”

Rhett says that was really one of the main reasons for founding Sierra Madre Research in the first place, to help fight the clean drinking water crisis that affects millions of people worldwide.

“The mission behind Sierra Madre, which I founded in 2010, is to introduce people into an elevated experience in the wild,” he adds. “We want them to enjoy their outdoor experience with the comfort and protection they would have in their own home. But the underlying mission was, and still is, to end the clean drinking water crisis that plagues several million people all around the world. So, with every product that we sell, a portion of the money goes toward drilling clean water for individuals in one of these regions. Right now we’re focused in Central America.”

Rhett says that Branson will remain a 15 percent partner in the company for as long as Sierra Madre Research exists or more investors are brought in. “As long as we remain intact, and don’t do another round of funding, he will retain that 15 percent until we close the doors. And if that point in time ever comes, we’ll all exit. And if more investors ever get involved, things of course would change at that point as well.”

The company, presently located in Vicksburg, is relocating to Chattanooga, Tenn. sometime in 2018 to try and get a little closer to their target audience. Rhett feels this will be a good business move for Sierra Madre Research.

“With the Appalachian Trail and all of the rock-climbing excursions and whitewater rafting that goes on in and around Chattanooga; it is exactly where we need to be.”

Rhett adds that as a Christian, he believes wholeheartedly that what happened to he and his wife and their company with “Shark Tank” was divinely-inspired.

“There is no doubt in our minds, this was God-inspired. I just don’t believe that there’s any way that I or Juli could have mustered what happened. It was not in our hands by a long shot. We give God full credit.”

As far as what’s next for the company and he and his wife, Rhett says that they plan on moving forward enthusiastically.

“We do about 25 percent of our business internationally. We are first going to maximize our national footprint and maintain our international footprint. We have a lot of room to grow here in the United States. Over the next year, we’re going to be pretty aggressive. We have some nice stretch-goals to reach toward. And our entire focus is on this for at least the next five years, to put us where I think the company can be, as far as being a global brand for the outdoor industry.”