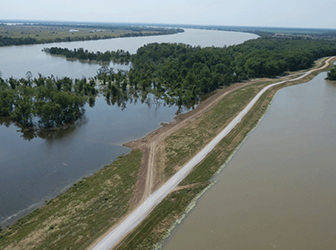 The building of America has waxed and waned under assorted presidents. In 1927, Herbert Hoover—a civil engineer by trade—actually picked up his drawing tools and volunteered his services to help configure how to shore up the massive Mississippi River Levee and other flood control mechanisms. The great river will never be totally contained but the work has saved billions of dollars, people’s lives and land. Now with a president who has a construction business background the industry is being geared up for at least four years of growth.

White Construction, that originated out of Clarksdale, is now an 18-state organization with construction projects spread out over 12 business units spanning residential, commercial and government. Since the inauguration, their business has increased exponentially with contracts that were just waiting for a change at the top.

“Projects that were being held for three years were released on January 20th. The change of administration was not only welcomed by the construction industry it was long needed,” Tracy Bailey, vice president of Preconstruction Services for White Construction says. “People in companies are feeling a little stronger about the future and time will tell. Private firms were scared to death to release multi-million dollar construction budgets because they didn’t know what was coming next from the administration.”

Bob Wilson, executive director of the Associated General Contractors of Mississippi (AGC), is hearing a an old familiar tune throughout the industry—“High Hopes.”

“Generally, the Trump administration is causing a lot of optimism within the industry because of his infrastructure comments,” Wilson says. “Everyone is waiting to see what the details are. Whether it will be a trillion dollars or not, his background and initial comments are encouraging for our industry.”

Wilson did note that the new president’s undertaking would require a lot of planning before shovels are in the ground.

“Those types of big infrastructure projects take a while to put together so that part of his plan will take some time to implement,” he says. “If there are smaller projects in the mix, urban housing projects, etc., things may move a little faster.”

And then there’s always the money side of things and finding room in budgets to make things happen.

“Our state legislature is waiting to see what monies would be available to the states before committing budget dollars here. Nobody seems to have a feel whether the monies will go to more urban metropolitan areas or not. Mississippi is largely rural, however, we have good representation in Washington and they may be able to allocate more funding to our state.  There is a lot of talk about Private Public Partnerships (P3), tax incentives for private investment and such. How all that would work is yet to be seen. P3’s and private investment through tax incentives usually have to have a revenue component to make them cash flow which is ‘usually’ not something you think about when you talk infrastructure.

One part of the imminent construction plan is unburdening the industry of layers and layers of regulations. Remodeling OSHA’s enforcement vision from penalties to safety will be a big step.

“It appears that regulatory relief will be a key element of the Trump administration and that is definitely a plus for our industry. Shifting OSHA from a program strong on enforcement and fines to strong on preventive inspections and working with the contractors to make sure job sites are safe should be positive move for everyone.  Under Obama, OSHA had little oversight and seemed to set their own agenda. Huge fines, coupled with an unwillingness to work through issues at the job site, increases cost and punishes small to medium size contractors. There are a whole host of other regulatory changes, from overtime, minimum wage and health insurance that are on the table.”

Across the state, government budgets have been tight according to Wilson.

“Where budgets are reasonable and plentiful, there will be a lot of government work on public buildings, renovation projects, state owned universities and such. Mississippi is not in that realm. State budgets are tight and getting tighter so the amount of projects coming out of the legislature is limited. Again, that could change if Trump’s plan call for a lot match from the federal side.  It is still wait and see.”

The state budget is still being cobbled together and what funds are available won’t be known for a while.

“We’re still in the middle of that process. We won’t know for sure until the legislative session winds up. There will definitely be some increases in spending, but no one knows how that will look yet. Infrastructure funding is still up in the air especially when it is financed with tax and fee increases. We have a very conservative legislature, and they are moving slow on anything that increases taxes and fees.”

Wilson is “cautiously optimistic” about 2017 for the industry.

“A lot of programs, funding, focus will come to light in 2017. It may be 2018 before any larger projects materialize but, by the end of 2017, we’ll know more about what to plan for and, so far, that looks more positive than it has in years,” Wilson says.

“There does seem to be positive momentum in the area. We are continuing our focus in education, commercial and municipal work. We have a new project awarded at Columbus Readiness Center through the Mississippi National Guard and some new residential. We don’t anticipate higher construction budgets for university and community colleges across the board. We are continuing to do ‘more with less,’” Riser says. “We also expect completion of the Greenwood Police Department renovations and Rail Spike Park in Greenwood this spring.”

At David Smith Construction in Inverness, Martin Smith has hired an additional superintendent to keep up with the busy schedule of work.

“We have one new superintendent and we’re working 30-35 people out in the field—laborers and carpenters,” Smith says.

Since January, David Smith Construction has picked up a contract to build 17 buildings in a housing project in Greenville. They are finalizing phase one and are negotiating phase two. They are also renovating a grocery store in Indianola and are renovating a building in Belzoni for UMMC. They are going to open a clinic there.

Chris Collins of Collins Construction in Cleveland has remained busy and is working each day to make room on his desk for more projects with all of the optimism in the industry.

Other projects include a $5.2 million renovation to William H. Zeigel Hall at Delta State, paving work in Cleveland,  a Helena Chemical warehouse, and projects for Monsanto.

“We are staying local to the Delta. I’ve had clients call us to go to Tupelo, but that’s in the pre-planning stages. Our private customers are really starting to ramp up their building plans.”

New technology, including a program “Plan Grid” allows builders to put all of their blueprints on iPads.

“You put those iPads in the field and the guys can pull up whatever sheet they are working on and see what it is they need to be doing rather than having printed plans. They can also take photos of any issues and tie it to that plan, then email that on for questions or clarifications. That has helped us get responses to questions back quicker,” Collins says.

“Most of our clients are getting away from exterior wood siding products and are now using a Hardie Board material—a cement board because it doesn’t rot. That is becoming more common even though it’s more expensive but a lot less maintenance with it in the long term,” Collins says. “We’re seeing a lot more energy efficient equipment going in the way of heating and air conditioning and using more tankless hot water heaters.”

There should be plenty of plans for all of those high tech hot water heaters over the next four years.