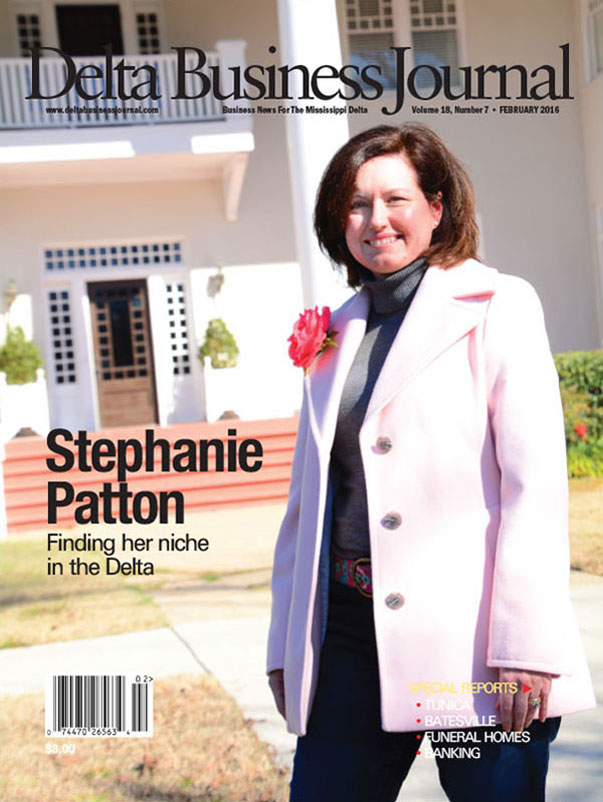 When Stephanie Patton moved to Leland six years ago, she was eager to trade her business suits and heels for blue jeans and boots. Twenty years in the corporate publishing world of Time Inc.’ s Southern Living magazine had honed her business acumen, but she and husband, Kenner, who had also climbed the publishing corporate ladder with Southern Living, were both ready to make a move—a big one. “ You know, as I got older, I realized that I had different priorities than I did when I was in my 20s,” says Patton. “ After college, I couldn’ t wait to get out on my own, but when I hit my 40s, I didn’ t like how much my career was keeping me from missing the really important things in life, things like family and community. I wouldn’ t trade my time with Southern Living for anything, but I know all that experience was just excellent training for what I’ m doing now—what I’ m really meant to do.” Patton, who is originally from West Monroe, Louisiana, says choosing Leland and the Mississippi Delta as the place to live was an easy decision. “ We wanted to be closer to family, and Kenner’ s parents and family are in Leland,” says Patton. “ We’ re now only a couple of hours away from my family in West Monroe. Plus, we have all the benefits of the Delta—low cost of living, no traffic, great restaurants, nice people, and the coolest and most authentic music and art scene.” The only thing the Pattons didn’ t have when they moved to Leland was gainful employment. “ Kenner is a woodworker, a very talented furniture-maker,” says Patton. “ And once we moved here, he opened a shop and decided to give that a try and see what happened. I was planning to hang out for awhile and see what was out there. So, I started networking with people around the Delta to get a feel for what was going on. I knew I wanted to do something that helped the community.” A few months later at an Eagle Scout event they attended for a friend’ s son, Patton took some pictures and wrote a story to go along with it and sent it into The Leland Progress. The local paper is published weekly and has been in business since 1897. “ I thought it was a neat event, so I emailed the story and a photo to the editor, Gaila Oliver, with a note that said if she could use it to please feel free to run it,” says Patton. “ She emailed me right back and said, ‘ Thanks for sending. Would you be interested in buying the newspaper?’” Patton says she laughed and told her “ no thanks.” She thought her publishing days were behind her; however, Oliver kept checking in with Patton every couple of weeks. “ I looked at the circulation and the advertising side, the newsstands sales and distribution and just everything as a whole,” says Patton. “ I felt good about handling the business and marketing side, but hadn’ t had any hands-on editorial experience in a long time. Regardless, I knew this was exactly what I needed to do to get to know the community.”

In 2010, Patton dusted off her Journalism degree from the University of Louisiana-Monroe and became the publisher and editor of The Leland Progress, while Kenner continued to grow his woodworking business and began farming with family. He is now the Communications Coordinator for the Delta Research Extension Center in Stoneville. Patton redesigned the layouts, added specific editorial sections, and published her first edition as the new owner in February 2011. “ I was a little nervous about making the jump from magazines to newspapers, but I love newspapers,” says Patton. “ Don’ t let all the hype about the decline of newspapers fool you. I offer my subscribers a digital e-edition and social media, but the majority of people still want that printed paper. I like social media as much as the next person, but Facebook isn’ t big on fact-checking. People still trust a newspaper.” Working with the local newspaper has helped Patton become involved in the community. She has served as president of the Leland Chamber of Commerce Board of Directors and is still on the board. She is also on the Board of Directors for the United Way of Washington County, and most recently served as the campaign chair. In addition, Patton holds a Board position with the Mississippi Press Association and served as the Leadership Mississippi Chair for the Mississippi Economic Council last year. Patton is currently involved with Delta Council and was recently named Board Chairman of the Washington County Economic Alliance. Patton’ s efforts to grow The Leland Progress and use it to bring the community together has not gone unnoticed. In 2015, she was awarded Business of the Year by the Greenville Arts Council, and was named Volunteer of the Year in 2013 by both the United Way of Washington County and the Washington County Economic Alliance. Being involved in the community also helped Patton identify an opportunity to bring a new business to Leland and the Delta. Along with five other Leland couples, the Pattons formed an LLC and purchased a historic home on Deer Creek, renovated it, and opened it as The Thompson House Bed & Breakfast and Event Center. “ The newspaper office is just around the corner from the Highway 61 Blues Museum here in downtown Leland,” says Patton. “ All spring, summer and fall, visitors from all over the world would stroll by, and since I keep my door open a lot, they sometimes would wander in. They’ d tell me they were here for the day visiting our Blues Trail sites, but would be leaving for Memphis or New Orleans. I hated that Leland, Washington County, and the Delta kept missing out on keeping them here for a night and letting them enjoy our restaurants and spend money with our shops and other retailers. The Thompson House has helped keep those travelers here a little longer.” Going into its third year, The Thompson House has hosted guests from as far away as Australia and as nearby as Greenville. The historic home has also become a favorite venue for weddings, family reunions, bridal showers, club meetings, graduation parties, and more. “The success of The Thompson House can be attributed to some very dedicated partners and a community that is as determined as those partners to see it succeed,” says Patton. In 2014, The Thompson House was named the Best Rehabilitation in the State by Mississippi Main Street, and Patton was honored with an Award of Excellence for her service in the private sector by Mississippi Main Street in the same year. Patton laughs when she says she came to Leland with no job and now seems to have several. “ I see so much potential in so many parts of the Delta,” says Patton. “ I’m lucky to be here, and while I am here, hope I can contribute a little something to make our piece of the world even better.”