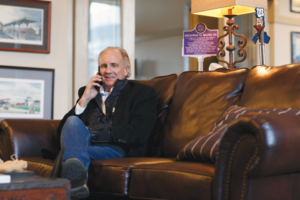 Developer of Clarksdale’s highly anticipated Travelers Hotel and co-founder of the Juke Joint Festival has taken on yet another role in Coahoma County. Bubba O’Keefe, recently named executive director of the Coahoma County Tourism Commission, is anticipating growth and prosperity in his hometown.

O’Keefe is no stranger to tourism in Clarksdale. He’s built lodging accommodations, like The Lofts at the Five and Dime and the Sunflower Lofts, and he’s helped place businesses such as Yazoo Pass, Hambone Art and Music, and Cat Head Delta Blues and Folk Art in vacant buildings downtown. Long before Juke Joint festivities ever hit the streets of downtown Clarksdale, O’Keefe opened a visitor center inside the Greyhound bus station.

“I’ve never been affiliated with tourism,” O’Keefe says. “I just was living it.”

As a homegrown Delta boy, O’Keefe says he took Clarksdale’s charm somewhat for granted until later in life.

“In this town and area, we’re blessed with a lot of cultural and historical assets that, for me growing up here, I didn’t know about fully,” he says. “When I found out exactly how huge and just the extent of our importance, it blew my mind. I was thinking, ‘How could we sit on this treasure and not share it with the world?’”

O’Keefe says, “We’re stewards of this gift of history.” And as stewards, Deltans can either use this gift in a way to help their towns grow or, they can exploit it and try to make a dollar off of it, and it’ll just die.”

O’Keefe’s idea of “tourism” may differ from what one could expect. He’s often asked, “How much money are tourists going to give?” or “Are they going to invest in Clarksdale?”

For him, tourism is about building and nurturing relationships with tourists in a way that keeps them intrigued by Clarksdale and with its many characters.

When tourists come to Clarksdale, they buy something to eat, they buy souvenirs to take home and, sometimes, they buy houses to live in. But whether they plug into the community for a day, for a night or for the rest of their lives, O’Keefe says each tourist is just as valuable as the next.

“We want to share our world with them,” he says, “Whether they stay for a moment or a lifetime, they have an impact, an influence in our town. That’s what we want to build.”

Guests have to be enticed before plugging into the community. Luckily, O’Keefe knows just the trick to engage visitors.

“It’s hospitality,” he says. “Hospitality costs you nothing. For something that doesn’t cost you anything to provide, but if it’s not provided properly, you could lose everything. The key is, just be nice.”

In addition to sweet Southern hospitality, O’Keefe wants tourists to receive more than a brochure when they come to Clarksdale.

“It’s more than an attraction,” he says. “We are a Sesame Street. We have a cast of characters. We want visitors to get to know  those characters who are unique to Clarksdale.”

O’Keefe and tourism board members have been exchanging ideas to incorporate a video presence and have also been exploring ways to better familiarize tourists with the Clarksdale area for a more enriching first-time experience.

O’Keefe’s focus reaches beyond Clarksdale and Coahoma County lines, however. As part of the flyways from New Orleans to Nashville, the Delta has many attractions outside of the county that may perk the interests of Blues enthusiasts, history buffs or maybe even food connoisseurs.

“You try to find what people are looking for so you can share with them places they might not know about,” O’Keefe says. “We want to be not only the concierge of Clarksdale, but an assistant in sharing other places with them. We want to be a pivotal player in referring people to other towns when they’re here.”

If tourists are headed from Clarksdale toward New Orleans, O’Keefe wants them to know about the GRAMMY Museum® Mississippi in Cleveland or the B.B. King Museum in Indianola.

“If we can be a good neighbor in their travel north or south, we want to be there,” he says. “And we want our brother and sister towns in the Delta to know that we’re sending them their way.”

O’Keefe says of all his previous work in promoting Clarksdale, he’s never been disappointed. Things have always worked out according to plan, even his most significant achievement.

“Without a shadow of a doubt, the biggest achievement for me is raising a family in Clarksdale, Mississippi,” O’Keefe says. “My family loves Clarksdale. We know of a lot of the issues we have, and it’s no different than any town. So for us, to say, ‘hey, we love Clarksdale and we raised a family here and we’re going to continue to’ is the greatest achievement.”

With a large Coahoma County support group behind him, O’Keefe is looking to fulfill some high hopes.

“People have been very encouraging over all these years, even when there was nobody downtown,” he says. “People want to see hope. They want to have hope and when you show them a reason to have hope, whether it’s in a building—one building at a time, how you can take a building that’s empty and dilapidated and restore it and make it viable like a ‘Yazoo Pass’ – It gives them hope. And that’s what we need most of all in Clarksdale and Coahoma County is a ray of hope.”

“I work here for the Coahoma County residents. I represent them, and I want to represent them in the highest and best way I can,” he added. “I am blessed to be here, and I don’t take that for granted.”