Alot has happened in the almost three years since Dr. Jeffrey Vitter took the helm as Chancellor of the University of 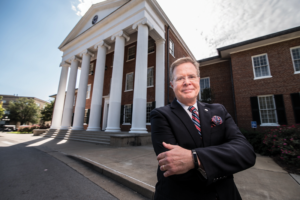 Mississippi. Ole Miss is the Flagship University of the state, considered the best-known college in the state with the largest enrollment, just over 23,258. With an annual budget of $2.5 billion, it is also an economic powerhouse.

Recent accomplishments include:
• In fiscal 2018, external research funding on the Oxford campus was up twenty-three percent, and overall at the university it was up 8.5 percent to a total of $134 million.
• Total fundraising for the Oxford campus in 2018 was up almost 8 percent. Private donations across the university were nearly $117 million, the seventh year of more than $100 million, which helped the Ole Miss endowment climb to a record high of $715 million.
• About $1 billion in new construction has recently been completed, is underway or is planned.

• Ole Miss has been named the twelfth fastest-growing university in the country in the past decade.
• Economic development through entrepreneurship and technology commercialization continues to bear fruit. The nineteen-acre Insight Park is home to twenty-one companies, several based upon technology developed at the university. The university has more than 100 commercial agreements with companies.
• At the state’s only academic medical center, the University of Mississippi Medical Center (UMMC), new space is being opened for clinical trials and translational medicine in order to take promising ideas and move them into practice. UMMC is a top healthcare provider in the state with more than one million patient visits annually.
Vitter is a major proponent of the transformative ability of higher education to empower students to have meaningful lives and livelihoods while making the world a better place.

“It all comes down to our mission of transforming lives, communities and the world,” Vitter says. “Within the system of higher education, flagship universities have special responsibilities to lead and serve their home state. Serving as Chancellor of the University of Mississippi is an awesome responsibility because of the opportunity we have to raise the standard of living for Mississippians through the power of education.”

Under his leadership, Ole Miss has implemented the Flagship Forward strategic plan.

“It is our roadmap of excellence,” Vitter says. “We have created amazing programs, and the recognition we are getting is very rewarding.”

The University of Mississippi has earned the Carnegie R1 Highest Research Activity designation, held by only the top 2.5 percent of colleges and universities nationwide. Vitter said that such a designation means that the university excels in innovative research, and what is particularly exciting is when those innovations can be further developed into practical technologies, treatments, or cures.

“Effective treatments and cures are what our world desperately needs, and we are leading the way in research on the diseases like Alzheimer’s and diabetes that impact Mississippians most,” Vitter says.

In addition to the main UMMC campus in Jackson, the university operates hospitals in Lexington and Grenada, and has partnerships elsewhere in the state. UMMC is one of only two entities in the country to have a National Telehealth Center of Excellence Designation for providing medical care in rural areas without doctors. UMMC has the only Level One Trauma Center in the state, is a major organ transplant center, and operates the only children’s hospital in Mississippi, Batson Children’s Hospital in Jackson.

In addition to the main campus, Ole Miss has satellite campuses in DeSoto, Tupelo, Booneville, and Grenada. Vitter

visits the Delta often, and just recently spent time at the Delta Council and the Delta Health Alliance to learn about opportunities for further collaboration. The university is closely involved with the U.S. Army Engineer Research and Development Center in Vicksburg on some applications of pioneering research done at Ole Miss.

Recent lean budget times for Mississippi have resulted in cuts to higher education. For Ole Miss only one out of every $8 in operating revenue comes from state appropriations. Vitter says that Ole Miss works hard to ensure access and affordability, particularly for Mississippi students. Its tuition is among the lowest in its peer group.

“The positive approach is that our university has been entrepreneurial,” Vitter says. “We understand the state has had revenue shortages, and we appreciate the strong support of legislators and statewide leaders who value higher education, but they don’t have the revenues to fully support it. We have been proactive in raising other forms of revenues, for example, attracting out-of-state students who subsidize the education of in-state students. We have novel programs at the graduate level that attract students from throughout the country and bring revenues to the school. We are expanding our international student body to broaden the cultural experiences for our students on the campus, and also provide added financial support to the university.”

It is hard to imagine how much Oxford and Ole Miss have grown in recent years. Thirty years ago, there wasn’t even a McDonald’s in town, and only a few restaurants. Fueled by Ole Miss, the population of Oxford grew 24.3 percent between 2010 and 2017 alone.

With such rapid growth, Vitter says they “tapped the brakes” on student enrollment to help catch up the infrastructure. This present school year, enrollment dipped by two percent. But that has to be contrasted with enrollment growth of 27 percent over the past decade.

“That sharp growth trajectory doesn’t come without challenges, and we have had our share,” Vitter says. “We have been growing at a pace that was not sustainable and were trying to build infrastructure to catch up. We are looking now to grow at a steady, sustained pace that will allow us to keep up in terms of our infrastructure and continue to provide a stellar learning environment.”

A lot of the focus in the strategic plan is on synergies across different academic areas.

“In today’s world, the grand challenges we face are highly multidisciplinary,” Vitter says. “No one discipline has all the answers. We need a collaborative approach from across many fields. Our academic programs reflect that broad approach. For the past eight years, our programs in accountancy have been ranked in the top ten in the country. We now have a Master of Accountancy and Data Analytics and a Master of Taxation and Data Analytics that combine the world of big data, data analytics, and accounting, providing students skills to excel in this technology-driven world. Similarly, we have programs such as integrated marketing communications that bring together concepts of journalism, new media, big data, marketing and business that employers find highly valuable.”

Another approach is the program M Partner (MPartner.OleMiss.edu), which involves working with community partners in Mississippi to build a sustainable vibrancy in those communities. It provides students the opportunities to practice what they learn in the classroom by volunteering with communities in collaborative projects. M Partner has projects in its initial cohort of community partners: New Albany, Charleston and Lexington.

“Recently, we sent 150 students to the three communities for an active day of community service,” he says. “Our students practice what they preach, and by doing so really and truly learn so much about how to make a difference in this world.”

“Chancellor Vitter has not only set goals for academic and athletic excellence, he has championed our responsibility to partner with Mississippi cities to build healthy and vibrant communities,” Flenorl says. “It is an important reminder to our students, faculty, staff and alumni about the power of collective impact and shared resources to make a real difference in Mississippi.”

“I feel blessed to have grown up in a family that was very close and loving,” he said. “My parents were my role models. Both were tremendously strong advocates of higher education. They instilled in my siblings and myself a real appreciation and passion for higher education.”

“New Orleans is such a rich diverse melting pot,” Vitter says. “I am a huge fan of music, especially traditional jazz and New Orleans R&B. Growing up in that environment was just so stimulating. It gave me a great appreciation for history, music, the arts, and cuisine.”

Vitter graduated with a B.S. with highest honors in mathematics in 1977 from the University of Notre Dame, earned a Ph.D. in computer science in 1980 from Stanford University, and an MBA in 2002 from the Fuqua School of Business at Duke University.

Alongside him on the journey has been his wife of thirty-six years, Sharon. The Vitters are “huge sports fans.” So are

their three adult children, who, like their dad and eight other members of the Vitter family, graduated from the University of Notre Dame.

“They have become big Ole Miss fans and visit often,” Vitter says. “Our oldest daughter, Jillian, is on the faculty of the University of Colorado School of Medicine in Denver. Our son, Scott, a former Army Ranger, received his Ph.D. at the University of Texas in mechanical engineering and works for Bain & Company in Chicago. Our daughter, Audrey, received a Master of Professional Studies in Supply Chain Management from Penn State and works at G.E. Aviation.”
Vitter said being at Ole Miss gives him and his wife opportunities to attend great performances, go to a variety of athletic events and to hear a number of stimulating talks by our faculty, visitors and other illuminati in the area.

“And we love getting around meeting and interacting with people,” he says. “Oxford and Mississippi are very social places.”

Mary Donnelly Haskell, former chair of the Ole Miss Women’s Council, has worked closely alongside the Vitters since

they joined the Ole Miss family.

“We are indeed fortunate to have them as a part of the legacy we build for the university moving forward,” Haskell says. “What I appreciate the most about what they bring to the Ole Miss community is their spirit of service. Through every event and program that the Ole Miss Women’s Council sponsors, both the Chancellor and Sharon have been there every step of the way inspiring our student scholars to take advantage of every opportunity afforded them through leadership, mentorship and philanthropy.”

Sharon Vitter said what impresses her about Ole Miss is that people are so passionate, not just about athletics, but about all aspects of the university.

“I think Jeff’s broad background and experience at other universities before coming to the University of Mississippi gives his supporters confidence that he knows how to move the university forward,” she says. “It also gives the faculty confidence that he understands the pressures and the issues that they are dealing with. And since Jeff is on social media, it makes him more accessible to students, friends, and alumni. They feel comfortable approaching him when we are at events.”

Despite his busy career, he always had time for their children when they were growing up.

“What I admire personally about Jeff is that as a husband and father, he is loving, kind, and supportive,” she says. “When our kids were growing up, he always made the time to read to them, play with them, attend their school and sporting events, and take them on a fun outing. He was the fun parent! Even now, he’ll take the time to do something fun even though it means that he’ll be staying up late to finish his work.”

She also said he is very passionate about making a difference through education. At the same time, he is methodical and even tempered, which allows him to evaluate and discuss challenging subjects and events that take place on campus.

“He has a great memory and recall for people, places, and events,” she says. “He reminds me of a chess player who plays out every move to try and produce the best outcome.”