Lt. Gov. Tate Reeves, 45, has been a rising star in the Republican Party in Mississippi since he became the first Republican elected as State Treasurer in 2004 when Reeves was only 28 years old.

“In that first race, no one thought I had a chance,” says Reeves. “When I called potential donors, I heard a lot of, ‘I like your ideas, but no Republican has ever won State Treasurer before.’  That only made me work harder.”

One of the accomplishments Reeves is most proud of as State Treasurer is overseeing the Health Care Trust Fund Board. 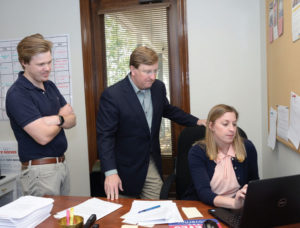 “I, along with other board members, noticed that about $20 million in tobacco settlement funds were going to friends of  Attorneys General Mike Moore and Jim Hood rather than for actual Mississippians’ healthcare needs,” says Reeves. “The board and I successfully fought to place that settlement money where it could do more for healthcare.”

After two terms as State Treasurer, Reeves was elected Lieutenant Governor for two terms, serving as second in command to the governor, and overseeing the Mississippi Senate.  Now Reeves is once again running for election, this time for the state’s top job. He handily won the Republican primary election runoff August 27 and will face Democrat Jim Hood in the general election Nov. 5.  Most polls have shown Reeves ahead and he has raised about seven times as much in campaign contributions as Hood.

Reeves said he is running for governor to continue steering Mississippi in the right direction with conservative public policy ideas that are working. 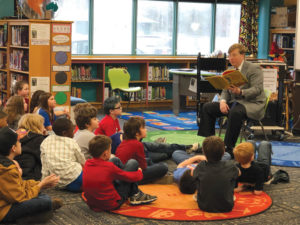 The state is going to spend about $400 million more on public education this year than eight years ago and has raised teacher pay. Reeves said the state is not just investing more in education, but is also willing to reform the education system.

Reeves grew up in Florence and graduated from Florence High School.

“I am grateful to all of my public school teachers in Florence,” says Reeves. “There’s no question I would not be where I am today without their patience and hard work. In my teens and early 20s, being on the basketball court was what I cared about the most. So, my coaches had tremendous influence on my work ethic and tenacity. As a guard on the Majors basketball team, Coach John Stroud showed all of us the importance of teamwork. Everyone on the team had a part to play, and there was no excuse for failing to work together.”

When Reeves wasn’t in class or on the basketball court, he was outside.

“My friends, my brother, Todd, and I would hunt and fish when we could,” Reeves said.

Reeves also has a keen appreciation for the importance of ag in the Delta.

“It has always been our largest industry and will always be our largest industry and we must have a governor in Mississippi who understands that,” Reeves said. “From my time of serving the last eight years with the leaders of the Delta, to ensure they have what they need from an infrastructure standpoint, we have built many long-lasting relationships that have been helpful to us in our political endeavors.” 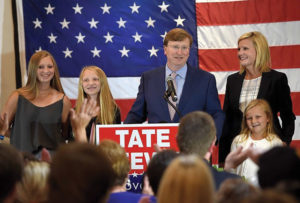 “I think that says a lot about the importance that I personally see in terms of what the Mississippi Delta means to Mississippi’s long-term economy,” says Reeves. “Some of those investments include the GRAMMY Museum Mississippi in Cleveland. While agriculture will continue to be the number one industry in the Delta and in Mississippi, I also think we have a huge opportunity to get more people coming to our state through tourism.”

Early on, Reeves dreamed of a career in the NBA, and played basketball at Millsaps College. While basketball was initially the draw, he “lucked into a quality education. I’ve always been good with numbers, so I enjoyed studying finance and economics. My degree is in economics, which I believe gave me a broad foundation for seeing how the give-and-take between sectors can impact local economies.”

In a finance class at Millsaps, Reeves met his wife, Elee.

“Elee asked me to help her use a new financial calculator,” says Reeves. “I’ve been doing whatever she’s asked of me ever since! I really couldn’t have found a better partner in life. It was about a year after we married when I told her I wanted to enter public service. Running for public office can be a big sacrifice for a family, and we were just beginning our lives together. Elee was super supportive and by my side from day one. She is a great role model for our three girls, who watch her balance her career and volunteer work with the needs of our family. I know how lucky and blessed I am to have Elee by my side.”

His first job after college was as an investment banker at Parksouth Corp which was a subsidiary of Deposit Guaranty. Reeves particularly enjoyed helping people reach their financial goals, whether that was sending children or grandchildren to college or raising capital to start a business.

“I also saw firsthand how government could help or hinder growth in a small business through regulations and restrictions,” says Reeves. “Seeing government and business intersect contributed to my belief that government doesn’t create jobs. It only creates an environment that helps people on Main Street create jobs for their community.”

While at Millsaps, Reeves volunteered on a few political campaigns, which gave him insight into ways to help make the state better and stronger.

Hurricane Katrina struck in his first term as treasurer. Maintaining the state’s financial stability was essential, and he worked closely with Gov. Haley Barbour, the congressional delegation, and other elected leaders to maintain Mississippi’s credit rating and preserve a secure economic future.

He decided to run for lieutenant governor because he saw an opportunity to make a real impact on public policy.

“You can really get down in the weeds on issues and see how legislation will impact our state,” says Reeves. “Over the past eight years, I have worked with legislators, House Speaker Philip Gunn, and Gov. Phil Bryant on all aspects of improving our state’s healthcare, growing the economy, and raising student achievement. At that end of the day, every person in that Capitol wants a successful, strong Mississippi. Some folks simply have different views of how to get there. Education reform has been the toughest fight–and the one of which I’m most proud. There are some people out there who don’t want anything to change. They want everything to work the way it’s always worked, and they think Mississippi will be fine. We can’t stay idle when it comes to educating our children. They’re going to enter a global marketplace, one where they can start a business on their phone and compete against someone on the other side of the world.”

Reeves believes public charter schools are giving parents more options to see their children are academically successful. And he is confident the Literacy Promotion Act that sets a standard for reading among children will be transformative.

“We’re going to see more kids stay in school and earn a diploma because they didn’t get left behind in third grade,” he says. “That’s huge.”

Reeves is particularly proud of the work the state has accomplished in the area of educating children of all ability levels. The state has invested in programs to help young people with autism, dyslexia, and other needs find the therapies they need and educational environments where they can thrive.

Reeves has taken advice from Gov. Bryant and former Gov. Barbour about the job ahead.

“They have valuable lessons to share on leading the state,” says Reeves. “Elee and I had long conversations about what being governor means for our family. We love Mississippi, and we want a Mississippi where our daughters can have good jobs and raise their families. Of course, I have prayed a lot about the decision to run for  governor.”

Reeves said the number one priority of the governor must be job creation, bringing better and higher paying jobs to the state so people can stay in Mississippi to start careers and provide for their families.

“That’s why I recently announced my workforce development plan to invest $100 million to boost workforce-training efforts so Mississippi can become a Ready to Work state,” says Reeves. “We must ensure that our workforce is prepared for the skilled jobs of the next fifty years, not the past fifty years. 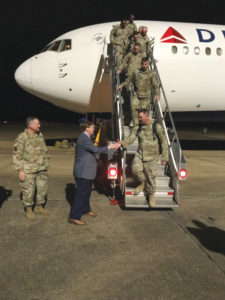 “I am running for governor to protect our Mississippi values and create a future Mississippi in which everyone can thrive and start lives, careers, and families here in our state,” says Reeves. “Mississippi is in the best financial shape it’s ever been in. We have the highest high school graduation rate of any time in our state’s history right now. And we need to continue that progress under strong conservative leadership.”

Access to quality healthcare in Mississippi is improving. As lieutenant governor, Reeves supported more than $27 million in funds for rural healthcare scholarships. But he said more needs to be done.

“We have struggling hospitals across our state, and we must find solutions to help the people in those communities,” Reeves says. “That’s why I recently announced my healthcare plan to continue improving our healthcare system and ensure people can receive quality healthcare. Just having more doctors isn’t enough; we need to get them to rural areas. That’s why I support increasing the number and expanding the geographic presence of medical residencies and embracing innovation through telemedicine. Even more specifically for hospitals—I support giving tax incentives to businesses that want to contribute to struggling facilities, as well as incentive packages to attract new doctors to our state.”

Mississippi’s economy has grown by almost $10 billion dollars in the past eight years. It used to be there were more people than jobs. Now the state has more jobs than people.

“And that is due in large part to the public policies passed by conservative leadership, including the largest tax cut in Mississippi history that we passed,” Reeves says. “In the 2019 fiscal year, which just ended in June, we collected more than $300 million more in revenue than was originally estimated. Instead of raising taxes, we created more taxpayers, helping Mississippi businesses grow and attracting new businesses to our state to create more high-paying jobs.”

“I was glad that, in the special session, we were able to invest a billion dollars in our roads and bridges,” says Reeves. “We showed that you don’t need to raise taxes on working families to get things done. There’s no perfect solution, but this was a good step. We need to invest in our roads and bridges, but not at the expense of hardworking Mississippians. People shouldn’t pay more at the pump just because politicians want an easy solution.”