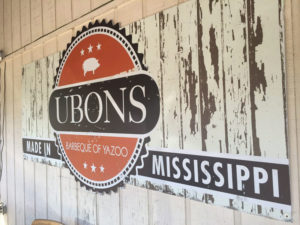 Ubon’s Barbeque of Yazoo (ubonsbbq.com) is nationally recognized and has won numerous awards and championships. The late Garry Roark, Pitmaster, was featured on television programs, such as Fox and Friends and participated in the Big Apple Barbeque Block Party in New York City, one of the country’s largest BBQ festivals. Unfortunately, Roark passed away in August 2018. But the legacy of award-winning BBQ continues through his daughter, Leslie Roark Scott and her son, Jacob Scott.

Leslie Roark Scott says Ubon’s started with her grandfather, Ubon Roark. While he was alive, Ubon was known as the social chairman of his family. Scott reminisces that he cooked every Sunday and people got accustomed to seeing smoke billowing above his house.

“My grandfather handed that tradition down to my father,” Scott says. “And my father continued making my grandfather’s BBQ sauce from his recipe, which goes back at least five generations. It’s a sauce that was created in southeast Missouri, so it’s got a Memphis flair with a nod to Kansas City.”

Scott adds that anytime the grill was going at her house while she was growing up, people would show up and ask her father to make sauce for them.

“My father started catering in the mid-1980s and was making Ubon’s sauce, one gallon at a time. The last time he made it in the kitchen, he made fifty one-gallon jugs. My mother told him that if he was going to do it, do it, but quit doing it in her kitchen,” she laughs.

So, Garry Roark found a place to make his sauce and he began to bottle it in 1986.

“He would load up his truck and drive through the Delta, stopping at different little mom-and-pop groceries. In 1989 he cooked his first BBQ competition at Octoberfest in Cleveland. He met his friend Boyd Atkinson, who is an attorney, and Boyd gave my father lessons in how to cook a pork shoulder, ribs, and other cuts of meat”

Scott says that by 1990, her father had won a grand championship in BBQ. And in 1991, they attended their first Memphis in May. It was a little later that Scott started pushing her father to let her do some of the cooking, especially when it came to ribs. 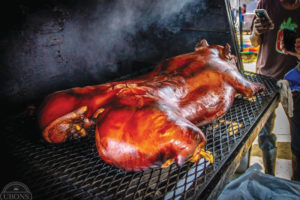 “I was at Delta State at the time and my father loved for me to come and help him with the cooking at different festivals as often as I could,” she says. “We had always had a very special relationship, but this was something that we really connected on. In fact, because of my father, I was the first female to win a grand championship on the Memphis in May circuit, and I’m one of the longest-running females out in the BBQ world today.”

Scott’s father worked in data processing at Mississippi Chemical at his ‘real’ job and moonlighted as a passionate Pitmaster in his spare time.

“He was part of the last workforce reduction of the company and he opened up Ubon’s Restaurant in Yazoo City in 2003 after he was laid off. His job at Mississippi Chemical paid the bills and it paid for his BBQ habit. But when he lost that job he had really already made a name for himself in the BBQ world.”

“We just did too much too fast. In 2005, we eased everything back to only having the restaurant in Yazoo City. We decided we could do what we do best with Yazoo only, because we wanted our BBQ to be phenomenal. And the best way to do that was to focus on one restaurant.”

In 2005 they were invited to go to the Big Apple Barbeque Block Party, which is where everything really changed for Ubon’s. 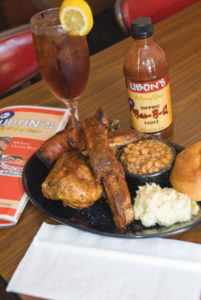 there, we watched the whole face of BBQ change. It was as though, once New York City understood something, everybody understood it on a different level. And we received so much press coverage. That first year we were on “Unwrapped” which is on the Food Network, and it was wild. We went from rednecks burning meat in our small town to rednecks burning meat in a big city,” she laughs.

Scott says they were shocked by the reaction they received in NYC. “We had people stopping to ask questions, and huge lines of people who would wait for an hour just to be able to eat some of our BBQ. Through the Big Apple Barbeque Block Party we watched BBQ change. Competition BBQ changed as a result. We’ve seen it change from anything goes to a very refined, high-profile competition and it’s a very involved cooking process. It’s interesting because if you really think about it, BBQ is America’s only signature cuisine. America is a melting pot and we’ve always tried to duplicate what other countries do as far as food, but BBQ is ours.”

With the high specialization of BBQ today, Scott feels it’s turned into a subculture. “And at the point where it becomes a subculture it’s not just about burning meat anymore. It’s more about the social aspect and society as a whole.”

With the untimely death of her father, Scott is determined to keep Ubon’s Restaurant, Ubon’s BBQ, Ubon’s Sauce and the Bloody Mary Mix her father developed many years ago, at the forefront of the BBQ and retail world. All with the help of her teenaged son, Jacob Scott. 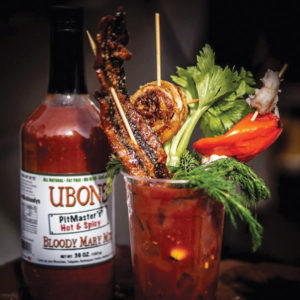 “My father died in August 2018 and I work full-time in the restaurant,” Scott says. “He was truly remarkable. He continued to travel to festivals with me, even though I told him I could handle it. But he felt like all of the people who attended were family and he really wanted to attend as much of the circuit as possible, even with congestive heart failure, which was his diagnosis in March 2018. Since his death, my son Jacob and I have been carrying on my father’s legacy.”

Scott says since her son was very young he had been helping his grandfather with festivals, prepping his first Memphis in May at nine-years-old.

“Since then, Jacob has done a TV show on Food Network called “Kids BBQ Championship” and a show called “Stove Tots,” it was a BBQ edition, and “Chopped Junior.” And last year in Memphis, he cooked the number six hog in the entire world. So, this teenager knows more about BBQ than a lot of grown people. And he loves it. It’s his connection to his Pop and he learned so much from him. He and I are both a lot like my father, we feel a connection with people through food, so we carry on the legacy. And we love it.”