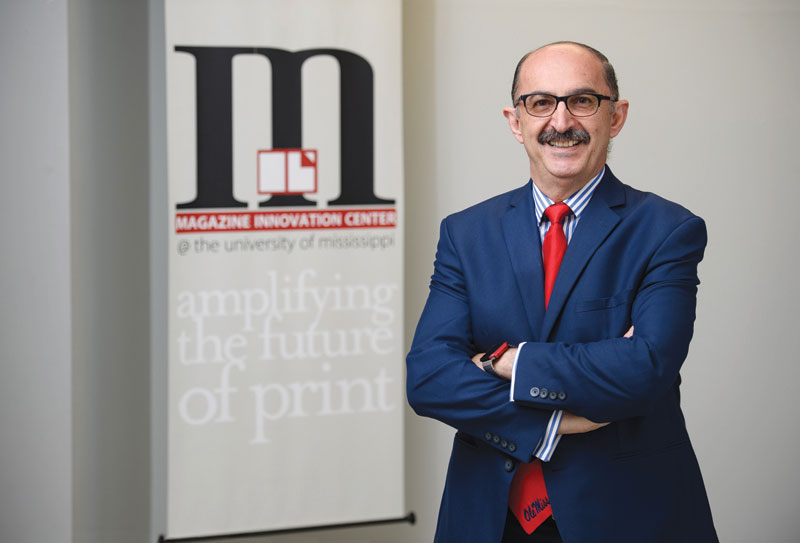 University of Mississippi alumna Amy Lyles Wilson is working to raise $100,000 to rename the Magazine Innovation Center at the Meek School of Journalism and New Media for the center’s longtime director and journalism professor Samir Husni.

A former student of Husni’s, Wilson wants to rename the foundation of the university’s magazine program to the Samir “Mr. Magazine” Husni Magazine Innovation Center in honor of the professor’s years of service and dedication to his students.

Wilson’s family donated an initial $55,000 gift to support the effort, and she’s inviting others to contribute through the Ignite Ole Miss crowdfunding platform to reach a $100,000 goal. Just over $76,000 has been contributed thus far, and Wilson is hoping more of Husni’s friends, colleagues, and current and former students will pay tribute to his legacy on campus.

Husni joined the UM journalism faculty in 1984 and has become known as the world’s leading magazine expert. Besides teaching, he continues to be a practitioner in the magazine industry by offering consultation and insight to new magazines.

In 2009, he created the Magazine Innovation Center to link the greatest minds in the industry with future industry leaders: Ole Miss students.

“I am humbled and honored,” Husni said. “I am thankful to Amy Lyles Wilson for starting this, and I’m proud to be serving Ole Miss magazine students since 1984.”

Since Wilson’s time in his classroom, she and Husni have become friends and peers, working together to publish his Launch Your Own Magazine book and supporting young people who dream of careers in magazine journalism.

“The magazine program has come a long way since a handful of us gathered in Samir’s classroom for his inaugural semester back in 1984, unsure of who he was or just what he was offering,” she said. “Even then, though, before he became world-renowned and tagged as ‘Mr. Magazine,’ it was obvious that Samir had an abiding interest in his students.”

Husni set the foundation for Wilson’s career, she said. Since earning her degree from Ole Miss, she has written for magazines, published books and developed communications materials for nonprofits. Wilson has co-authored or contributed to eight books, and her work has appeared in a variety of publications as well as on National Public Radio.