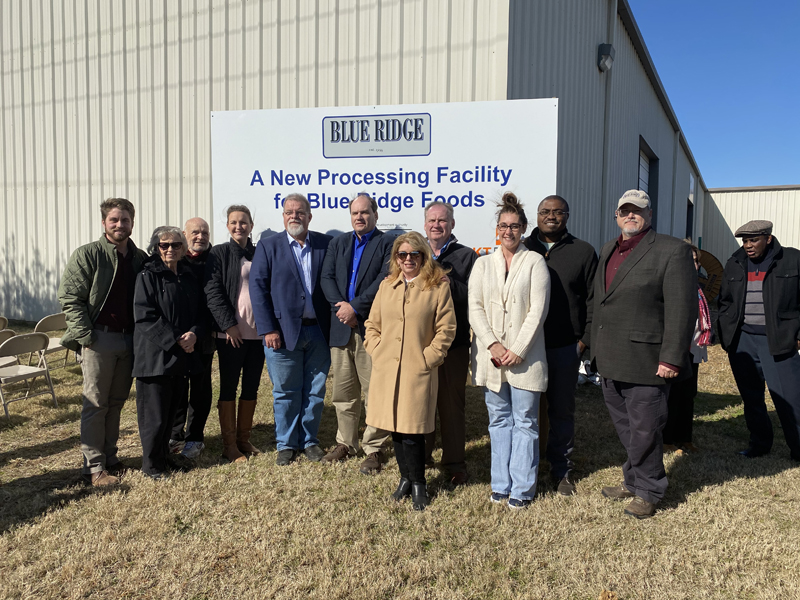 Brian Waldrop, the Greenwood entrepreneur, is excited about Blue Ridge Foods’ plans to open a meat processing and distribution facility in a 31,000-square-foot former warehouse in Greenwood-Leflore Industrial Park.

He and Wes Smith, the facility’s manager, slipped over to the facility the other day while workers for KT Builders, a Greenwood-based construction company with projects throughout the Delta, were completing the building’s renovation. This is expected to be finished any moment, and Waldrop says he is hoping everything and everyone will be ready to open in June. Blue Ridge’s investment covers more than $2 million, Waldrop says.

“We are setting up for growth,” he explains.

He and two brothers bought the South Carolina-based company, which has been in their family since 1919, from an uncle in 2015, and they’ve been working on expanding it to Greenwood for 21/2 years. Now, they and a fourth partner, want to expand Blue Ridge’s market west north and south from Greenwood to New Orleans, St. Louis, Memphis, Chicago and Houston, Texas.

“This allows us to open up new markets west of the Mississippi and within one day’s drive is seventy-five percent of the population of the United States,” Waldrop explains.

Blue Ridge buys meat, including beef and pork, in bulk, cuts and trims it and then packages it into 50-pound boxes. The meat is sold to school systems, grocery stores, restaurants and other distributors, among other customers. They buy everything from ox tails to ribeyes and with pork, from neckbones to tenderloins. Want to purchase trimmings or tripe? Blue Ridge sells these, too.

Waldrop says The Mississippi Meat Co., a retail shop his son Matthew Waldrop and partners Caleb Whites and Smith opened in Greenwood several months ago, is helping to inform Blue Ridge about the wants and needs of retail customers.

During a recent training session at Waldrop’s office on Howard Street in downtown Greenwood, which includes a kitchen and dining areas from a former a restaurant, Waldrop tasted beef tongue for the first time. “Tongues are wonderful,” he says. He’s expanding his culinary knowledge as the business moves forward, although he’s had plenty of experience in that area.

Waldrop moved to Greenwood in 1991 and worked his way up to become chief financial officer for Viking Range, which sold for $380 million in 2012. Now, he and varying partners own HomeFront Home Improvement Center, Outlaw Sporting Goods and Fresh Laundry dry cleaners, all in Greenwood, and C3 Design, which manufactures modular and mobile homes in Russellville, Alabama. Among his partners is Fred Carl, Viking Range founder, who recently told the Greenwood Commonwealth, that Waldrop “understood the big picture and was able to apply the financial side of things to practical decision-making.”

Construction at the new site began in January, and Waldrop’s excited to see how the interior is shaping up. This includes a long row of offices, large freezer and refrigeration spaces for meat processing and packaging, a staging area and huge shipping room plus, among other facilities, a cook room where trimmings will be used to make various end products, such as chili and taco sauces.

The goal is to hire twenty employees, who will be trained with assistance channeled through the Mississippi Development Authority.

“We are happy to welcome Blue Ridge to our business family. They will be very instrumental in putting some of our local to people to work at a time when we especially need new business employment,” says Angela Curry, Executive Director of the Greenwood-Leflore Industrial Board.

Smith, who worked in training for Milwaukee Tool, will be supervising. Smith grew up helping with butchering hogs, for example, on his family place near Black Hawk, and he’s knowledgeable about cutting and trimming meat. He says training will take place on site and elsewhere.

“Once you get past handling a knife, everything else is pretty simple to teach,” Smith says. “We really want to see people come in, help them develop into being a certain caliber of employee.”

Waldrop says Blue Ridge wants to develop a relationship with employees. “We want to make our people feel like they are part of a family—that this is their company.” There will be bonus plans based on profits, he explains. “We want everybody aligned. We want them to understand that their success is tied to our success. Where that has been done effectively, you have a culture that looks to the advancement of the company.”

He says he loves start ups, likes to see how strategy, hard work and responding to the needs of others results in success. He remembered how as a boy, around age twelve, he had a paper route in Greenville, South Carolina, and it included the hospital there. He’d peddle his papers room to room, balancing them on the top of his head. He always sold out. “I like growing businesses,” he says.