Dr. Glenn Boyce Chancellor of the University of Mississippi 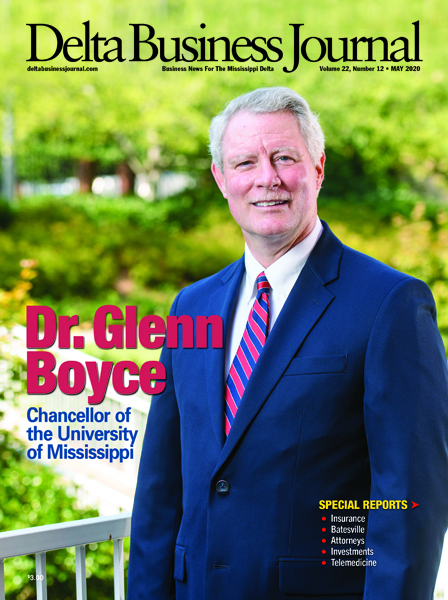 If somebody had told Dr. Glenn Boyce that one day he would be chancellor of the University of Mississippi he wouldn’t have believed them. Especially considering the first time he drove onto the campus was over forty years ago in a beat-up Buick he drove from upstate New York to attend school there. But, as the future would have it, Boyce returned to the university in October 2019 as the 18th Chancellor at Ole Miss.

Boyce is originally from Watkins Glen, New York and says  he wasn’t really destined for college growing up.

“My sister and I were first generation college students.” he says.  “We grew up in what New Yorker’s called the countryside, and like most of us from the country back then, were a very self-sufficient family.  I learned how to use my hands and work hard at an early age and still consider this the greatest legacy my dad left me.  Other than school, I did not come across many people who had been to college.”

“My dad worked road construction and drove heavy equipment.  He also raced stock-cars in upstate New York and before I was even a teenager he had taught me how to tear down an engine, use cutting torches, weld and drive a bulldozer.  We lived two miles from what was then the United States Grand Prix track.  His dream for me was that one day I would become a race car driver.”

Boyce says he was blessed because his coaches in high school took an interest in him and his athletic skills.

“Athletics and my coaches are what kept me from ending up racing at sixteen years old,” he adds. “It was the motivation driving me through high school and it’s also why I went to college. I realize that is not something a life-long educator should say, however back then it was simply the truth. I had the opportunity to play college basketball and football.  I chose to play basketball even though I was probably a better football player, mainly because of the influence of my basketball coach.  I played college basketball at a university in New York for a year and then decided to give up the game and transfer. I had to pay my own way through college, every penny.  I started looking through catalogs in the library and really wanted to go to Florida because I lived in the snowbelt and wanted to go someplace warm year-round.  But, I couldn’t afford any Florida schools, so I picked up the Ole Miss catalog, checked out the price and knew I could go there. I called Ole Miss that same afternoon, a lady told me to come on down. I loaded my car at Christmastime in 1977/78 and headed South; I didn’t even know where Mississippi was.”

That journey over forty years ago led Boyce into the world of education in a big way, and changed the entire trajectory of his life. Especially after meeting his wife, Emily, at the university.

“I’ve been in the field of education my entire career,” says Boyce. “I served as commissioner of Higher Education and prior to that I was IHL associate commissioner for Academic Affairs. I was president of Holmes Community College for nine years and a vice president for five years before moving into the president’s office.  And for ninteen years, I was in K-12 education in different areas. I’ve been an assistant superintendent, high school principal, a teacher, coach, drove a bus and have experienced just about everything the field of education has to offer.”

Boyce explains that while he has dedicated his professional life to the field of education, it wasn’t exactly a lifelong dream of his or something he’d been planning.

“I was originally a history major.” he adds. “I found my way into education while I was here at Ole Miss, kind of by happenstance.  Once I did my student teaching and began my career as a teacher and a coach, it turned out, I absolutely loved teaching and coaching.  In 1987 one of those pivotal points in life occurred.  Emily and I had our first child, Brittany.  I had experienced a lot of success as a coach and my wife and I were discussing whether I should pursue coaching as my profession or become an education administrator. As I was passionate about both fields, it was a very difficult decision.  We came to the conclusion that for the stability of our family and for our futures, I would pursue the education administrator route.”

Boyce says that’s when he went back to school and obtained his master’s degree and his doctorate, working his way up in administration, and eventually he left coaching behind.

Arriving back at Ole Miss in October 2019, was as though he had come full circle. Only this time he came back as chancellor instead of a student. And, being chancellor, Boyce explains that immediately upon his arrival there were some challenging decisions that had to be made.

“It wasn’t like I had a significant amount of time to evaluate certain situations. I needed to jump right in and get started with some major decisions. As you can imagine, I needed to hire an athletics director pretty quickly. Then once I had the athletics director hired, we needed to evaluate some of the athletic programs.  So, there was quite a bit of transition going on in the athletic department and we all know how important athletic programs are to us here at Ole Miss.”

Boyce says one of his initial priorities was making sure that he got to know people and people got to know him, especially students. To him, getting to know his students is one of the position’s great joys.

“I’ve spent my entire career working to make a difference, wherever I could, in the lives of students.  It has been one of life’s special blessings. So, I needed to get out in front of people and take the time to listen to find out what the direction of the school was currently, and to get a feel for the most significant challenges.  One of those challenges included growing and changing the narrative around enrollment.  The perception has been that we were more concerned with out-of-state enrollment than our own in-state and alumni students.  I want people to know that we are going to recruit in-state and alumni students just as hard as we possibly can, while also continuing to recruit outstanding out-of-state students. So, there has been a lot of conversation around this issue and I know that we need to work hard to change this discussion.”

Boyce says that long-range objectives for the university at this point are still evolving.

“My vision is still coming into focus, but certainly I want to stabilize enrollment. Now that is more of a short range than long-range objective, but in this day and time stabilizing enrollment is very important because we are in an incredibly competitive field.  Everybody is coming into Mississippi trying to recruit our students, in particular, our highest achieving students.  And, one of my enrollment objectives is to increase our alumni student’s enrollment. I want all of our alumni’s children to come to Ole Miss and have the same great experience their parents had. That’s important to me and to the tradition of this university because we are so family-oriented. All three of my children have degrees from here and that’s something I’m very proud of.”

Expanding technology and working to expand the state’s economy are also areas Boyce says are in his plans for the future of Ole Miss.

“I’m really looking at the opportunities that we have as a university to expand our efforts in the field of technology,” Boyce adds. “I have a vision for where we could partner in varying fields of technology.  While there are many, one such field is virtual reality. I’m a huge believer in the potential of virtual reality. I think virtual reality is untapped as a market; people are in it, but it hasn’t exploded yet. Much like telecommunications and cellphones changed the world, I see the same potential happening with virtual reality.  It’s a technology that we as the state of Mississippi could embrace. We could become the university that helps drive change in our state through the power of virtual reality. We could also spur a new wave of economic growth for the state by becoming home to America’s virtual reality companies.  I think it is vitally important that our university be a leader in building the state’s economy and putting our amazing research to work creating new opportunities for our graduates to stay right here and build their careers, and raise their families.”

Boyce says that up until the Coronavirus halted the normal activities of the university, he had extensive traveling on his agenda to promote the university.

“I had twenty-two cities on my calendar to visit and I had plans to get to know our alumni base both inside the state and nationally. Unfortunately, that will have to wait until the pandemic is behind us.”

Covid-19 was not something anyone had anticipated happening during the semester, but happen it did and Ole Miss quickly went into action to assist students with their studies and finishing up the semester.

“I just cannot praise our faculty, staff and administration enough for the transition to online that we had to make so quickly due to Covid-19,” says Boyce. “We went from an in-person, face-to-face institution, sure we had our share of online classes and specific online programs, but the way we took this entire university to a different instructional format in just over a week in order for students to finish this semester was nothing short of amazing. We were concerned about how we were going to take care of our students and get them through this semester, in particular our seniors and all that goes with that special year of college. What I discovered through this process is what a committed and special group of faculty work at this institution!  While I am saddened by the fact that we can’t have the activities that we would normally have for our seniors, we will find time to celebrate them, I can assure you.”

Boyce and his wife moved from Madison to Oxford and have discovered why so many people retire to Oxford.

“The Oxford community embraced us fully,” says Boyce. “I can’t say enough great things about Oxford. We discovered that it’s an incredibly vibrant and positive community. The people of Oxford are amazingly friendly and welcoming. It’s just a great place to live.”

Boyce says that sometimes he sits and thinks back on the journey that brought him to where he is today, chancellor of the University of Mississippi.

“Honestly, that’s why I accepted the responsibility. I wanted to try and do the absolute best I could to give back something that was given to me that changed my entire life. Not only did I meet my beautiful wife, I have been blessed with three daughters and the degrees from this university have catapulted their careers forward.  The most pivotal point of my life was based on that phone call over forty years ago and trusting this university to take care of me. I did my part by coming and they certainly did theirs by changing the trajectory of my life.”