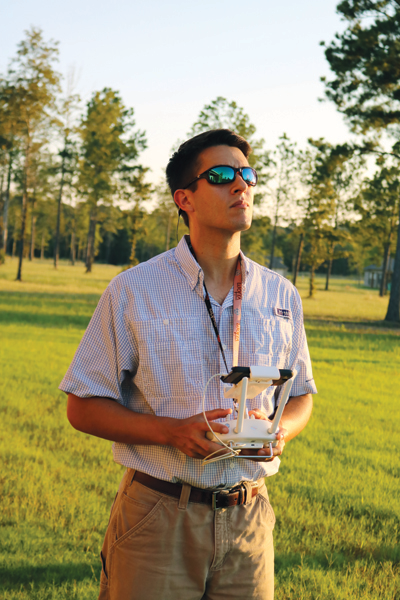 Weekend Hobby Has Turned Into a Business

Drone technology was first used by the military for use in strikes, and over the past decade, the technology has found its way into the civilian world. These days drones are used in business and many people have become weekend enthusiasts flying their drone over parties and hunting camps to survey the lay of the land. By day, Madison Dixon flies drones for his employer — Grenada-based land surveying company, EMC Incorporated — but on the weekends, Dixon flies his creative side.

Dixon spent much of his youth in the Cleveland area before his family moved to Louisiana as a teenager. But his love of the Delta drew him “home” where he picked up his degree, and again a few years after graduation, with his drone flying job.

“When I graduated high school I was looking forward to moving back to the Delta. So I came back and went to Delta State,” he says. “There were a lot of job opportunities in Louisiana, but I’ve never been able to stay away from the Delta and found my way back.”

“That can be very stressful, so taking photos and video on my own time was a way to relax and enjoy flying and it has turned into a personal business,” the DSU grad and blues enthusiast says.

Dixon enjoys flying and “started taking pictures I thought were pretty good and shared some on Facebook and got asked if I had any to sell. So, I thought I might want to take it more seriously.”

He uses a DJI drone and uses Adobe software to process his photos and videos.

“The drone itself has a stock camera on it — a 12-megapixel camera that can shoot stills and 1080 dpi video,” he says. 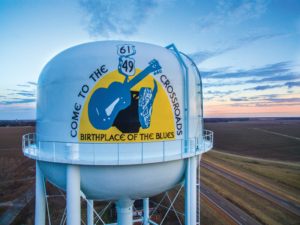 not crash it. I learned to really take my time to learn pre-flight procedures and regulations.”

Dixon worked on a RC Flight Simulator in order to acquire the skills of flying the drone and not slamming it into a tree or building while getting that perfect shot.

He hasn’t come across any extraordinary wildlife in his work or hobby but Dixon has had a few fly-bys that were scary.

“The most nerve-racking thing I’ve experienced on several occasions is when there are close passes with birds. When you’re up in the air, birds will fly by much too close for comfort. And, you get two perspectives, one from the camera on the drone and the other watching it from the ground, it gets pretty stressful.”

Dixon has a Facebook page and website, www.dixondrone.com, that show off his work from the air. And, he makes sure that he has landowner permission before he takes off into the wild blue yonder to shoot photos and video.

“When I fly over private property I maintain a relationship with the property owner,” he says. “If we fly, we’ve got landowner permission.”

His business continues to grow and he is looking for more opportunities. 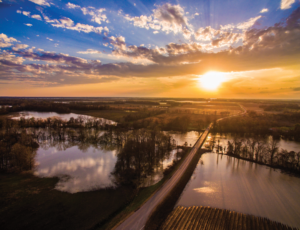 “I recently worked with PBS on a feature they are doing on the town of Cleveland,” he says. “I’m always interested in any event or special location, just anything I can as long as I stay within FAA regulations. I want to do this for a long time and be successful at it.”

The drone he flies can fly up to twenty minutes on one charge, but the one he uses for EMC has the capability to cover more ground and fly close to an hour. The B.B. King aficionado may make a living in the air but he’s firmly grounded in the Delta with a dog named Merigold and his slide guitar and harmonica close at hand.

“I’m always looking for more cool places to fly and shoot and there’s no shortage in the Delta,” he says.