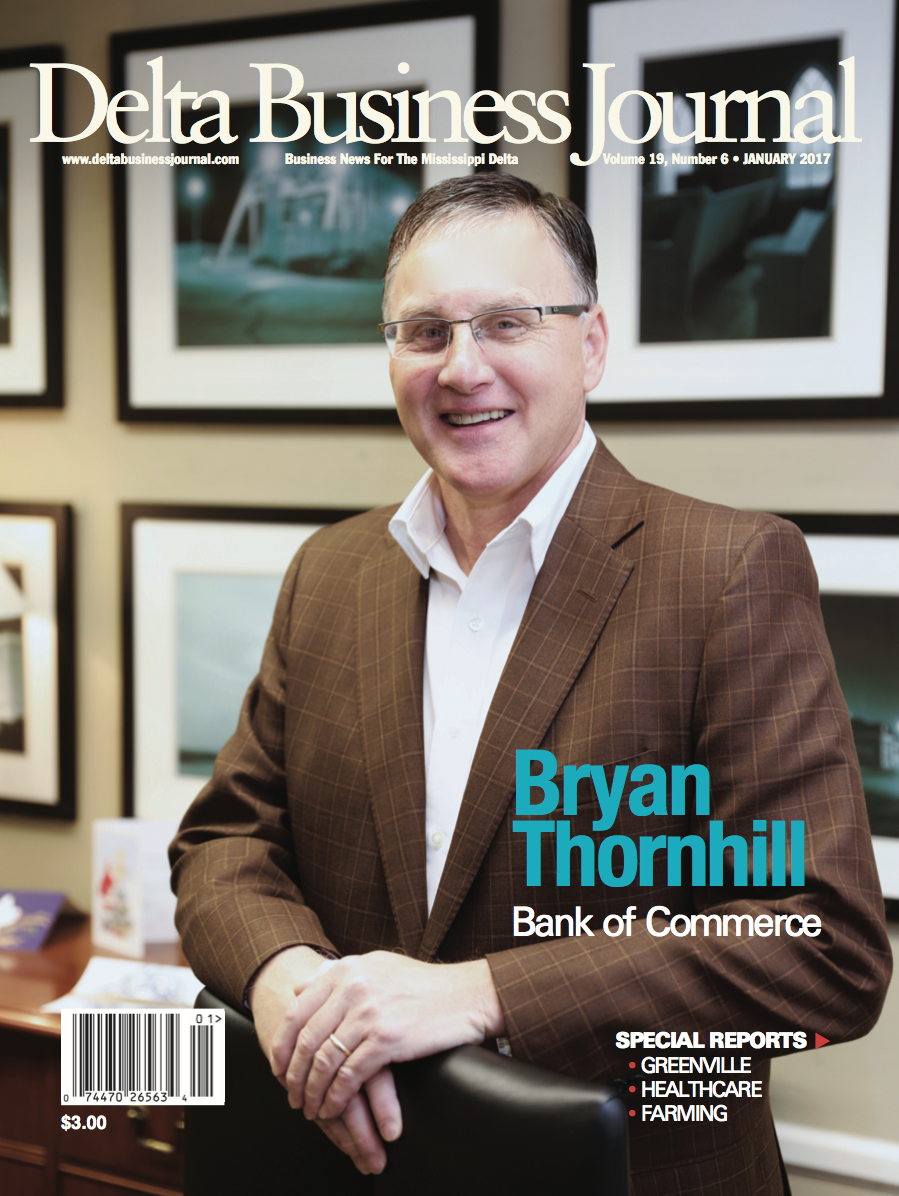 Some people work in order to have time off to do what they love. Others, like Bryan Thornhill, president and CEO Bank of Commerce in Greenwood, love work so much that their job is also their favorite hobby.

“Providing banking services is my life and my passion,” Thornhill says. “I’m here every weekday all day long. It is what I like to do. I don’t have a lot of hobbies. I bank for my fun, too. I get a euphoric feeling out of helping people and I love to see a community grow. What I enjoy the most is knowing that our services like loan products benefit a lot of folks. When I drive by and see a home financed for a family, I feel good. When I see a business that we helped finance, I feel good. To have the ability to truly help someone, that is enough to satisfy me. If you do that enough, the bank will grow itself.”

That seems to have worked really well so far. Since Thornhill took over as CEO in 2007, the Bank of Commerce has grown from a $172-million bank to a $375-million bank. The bank that was founded in 1904, making it 112 years old, has expanded establishing branches in Oxford, Starkville and Columbus where it has found fertile ground despite being in larger towns with bigger banks that had established customer bases.

“The way the bank has more than doubled in ten years has been from an array of all sorts of things,” Thornhill says. “We have a great ag community, and provide ag lending. That has been a wonderful growth area for us. Farmers are some of the most dedicated businessmen alive. We finance many ag loans and have provided financing for hundreds of homes. We have a great customer base and terrific employees.”

Thornhill sees his customers as partners.

“I will do whatever I can to help them succeed,” he said.

William P. “Bill” Litton, chairman of Wade Inc., which operates a dozen John Deere dealerships in the state, says that willingness to partner with customers is what has helped the bank grow.

“Bryan wants people who borrow from him to see him as a strategic partner instead of just a banker,” Litton says. “He understands their business, and helps them accomplish their goals whether to run a business or build a house. He also has a thorough understanding of business profit and loss, and efficiencies. He has never farmed, but is very knowledgeable about farming practices in our area, and government ag programs. Bryan is a banker at heart. He really loves what he is doing.”

Thornhill, who grew up in Greenwood, is a big fan of his town.

“Greenwood is a wonderful community,” he says. “Obviously, I’m going to be high on Greenwood. I love the Delta in general.”

Many people imagine suits and ties when thinking about a banker. But the dress code is more casual at the Bank of Commerce.

“We don’t wear ties in this bank anymore,” Thornhill says. “We don’t want customers to feel intimidated. We want them to know that when they walk into the Bank of Commerce, they are going to get helped. They will feel comfortable around us. We are representative of our customers. We want to make sure they are taken care of. It is all about the customer.”

Thornhill knew early on in his life that he wanted to be a banker.

“I loved how banks worked,” he says. “It was very interesting to me. I remember thinking, these people help people. I thought, ‘What a good group of people.’ It encouraged a positive spin on banking for me from an early age.”

Thornhill says he was fortunate to have a mother and a father, James and Joanne Thornhill, who instilled in their children a strong work ethic and good values. His father worked for Western Electric, a division AT&T, and his mother was a RN who worked for Greenwood-LeFlore Hospital and home health agencies.

Thornhill graduated from Greenwood High School in 1981. He attended Mississippi Delta Community College for two years, and then went to Mississippi State University for two years before joining the Mississippi Army National Guard where he was in the Artillery Battalion for ten years.

After military service, he transferred to Delta State University (DSU) where he earned a degree in business administration. While at DSU, he was hired by the Bank of Commerce to work part time and nights.

“It was my first real involvement in banking,” he says. “We cleared work at night. I had three guys I worked with many years: Steve Lary, Richard Avant, and the late Terry Green. They were really great thinkers. They helped influenced me and helped mold me into the banker I am today. I worked here at the bank after I graduated from college. Then I left Greenwood, and worked for a small bank in Cleveland called First National Bank of Bolivar County. After three years there, one day I got the call to come back to Greenwood to work for Bank of Commerce and was reunited with my three mentors. That was in October 1990. Here I sit now 26 years later.”

During those years, the country experienced the Great Recession caused in part by unwise mortgage lending, and resulting banking regulations were instituted that were intended to prevent excesses. Some small community banks have complained the regulations are too onerous and put small banks at a disadvantage. It has led some banks to merge with larger banks.

Thornhill says the regulatory changes have not all have been bad.

“It isn’t easy,” he says. “But some changes have been good and have made us a better institution. It has been a lot of change, but change is good sometimes. I embrace change. I look for the positive in it. We have been able to grow, and deal with issues like compliance. We have no desire to merge with another institution. We do well on our own. A lot of people call themselves community banks, but they aren’t. We are a community bank and we intend to stay independent because that helps us give back to the community.”

Part of the success in moving into the other markets in Mississippi, Thornhill said, is that they hired local people to work at the banks who showed they were willing to do extra to take care of customers.

“Larger regional banks can’t compete on personal service,” he says. “As far as products, we are competitive. We can deliver anything a big bank can. We are a state-of-the-art, high-tech bank that cares about Greenwood and the other communities we serve. We go as the community goes. We want to help the community grow because it helps us grow. You want to be the shining light on the hill. My goal when we start a bank in a new community is for everyone in that town to want to bank with us.”

Current plans are to slowly grow in the four markets. Thornhill said growth will take care of itself if you take care of your customer.

“If you grow too fast, you can lose customers,” he says. “We want to make sure we grow without losing sight of taking care of our customers. You can get so big you can’t focus. You can’t see the forest for the trees. If you go in too many directions at once, it can be hard to be competitive and deliver the best products to consumers. We are still small enough we can deliver that.”

All three towns they have expanded into are college towns. Thornhill says they encourage student banking and checking accounts. They know that once a young person opens an account, he or she may keep it for many years after leaving school.

“To not take care of a young person is missing an opportunity,” he says. “We are instituting some marketing opportunities directed towards college students. We target marketing to lots of different groups. We’ve had a great influx of members of the younger generation who are making decisions in the bank that makes it grow and offers the products consumers want.”

Thornhill and his wife, Kathie, have two sons:  Alden graduated from Mississippi State and is currently in law school at Mississippi College. Gardner at a sophomore at Pillow Academy in Greenwood. Thornhill loves to hunt, and appreciates that the Mississippi Delta has some of the best duck and deer hunting land in the country. He and his family also enjoy going to Mississippi State football games.

The family are members of North Greenwood Baptist Church. Thornhill formerly served as a member of board for the Greenwood-LeFlore hospital. He was a director of Mississippi Bankers Association for many years.