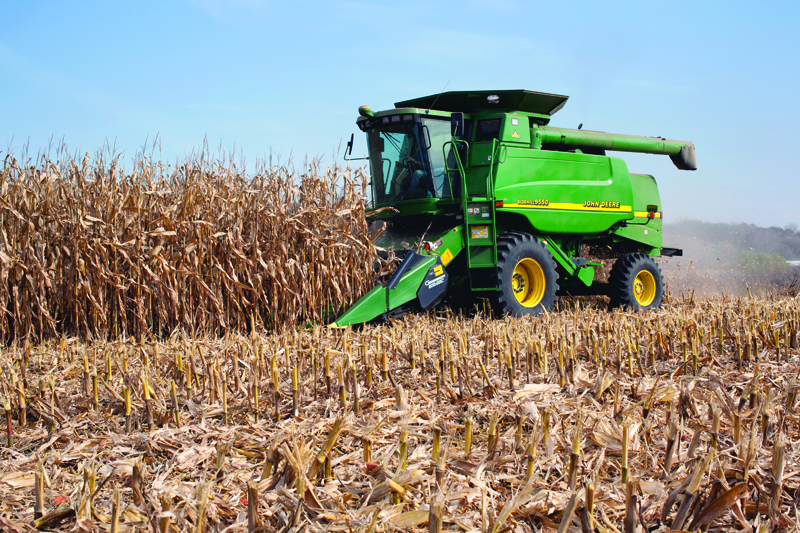 Delta row crop farmers have had their usual battles with mother nature, insects and the commodity market. But for those who hit their planting windows accurately and made their way through the hot and dry summer, the rewards should be positive. Extension crop experts and specialist offered their insight on this year’s crop battle for Delta farmers.

“Mississippi is about two percent under intended acres at 490,000

acres of cotton,”  says Brian Pieralisi, Extension Cotton Specialist. “We are up about ten  percent from last year.”

The hot and dry weather that every row crop endured was certainly a hard fought battle for Delta cotton farmers this season. As well as insect pressure.

“Drought, heat stress, thrips early season, and boll worms in 2 gene Bt cotton all created some issues across the board,”  says Pieralisi.

As farmers are readying their pickers across the Delta, there is an expectation of high quality cotton to be harvested.

“The crop has a vast range, from poor to excellent,” he says. “Fruit retention has been exceptional through early August. Some fruit shed did occur during cloudy days and wetter weather. Poor cotton is the minority, and I would say the crop as a whole is slightly above average going into harvest.”

Delta farmers increased  their soybean acreage to make the year work for them financially and few varied from the plan. A wet planting season was followed by hot and dry weather leaving those with irrigation in a good position to keep water across their fields.  Soybean specialist Dr. Trent Irby from the Mississippi State Extension service explained more about soybean season.

“The year began with surveyed planting intentions being at 2.35 million acres,” says Irby. “The planting report released in June, however, listing Mississippi at 2.3 million acres. We will likely end up harvesting just short of the 2.3 million acre mark.”

The “Jekyll and Hyde” weather patterns that farmers routinely have to deal with brought out an excess of polypipe for thirsty soybeans.

“The heat and dry conditions are the main issues that farmers have dealt with up to this point. Portions of the state remained too wet to get anything done until the drought hit in June. Then it went from too wet to too dry to plant in a short period of time. Other areas got planted on time, but ended up going weeks without any major rainfall,” he says. “This is certainly a year where irrigation, where possible, has been extremely important. Insect issues at this time are all over the board with some areas not having any issues at all and others having had significant pressure for a while now. This could be a big issue moving forward as more acres reach maturity.”

Planting windows that were hit with luck and precision between storms should bring a decent yield according to Irby.

“It just depends on where you’re standing. We have some really good-looking irrigated soybeans that were planted in the optimum planting window and have made it to this point of the season with very few issues, other than extreme heat. We even have some non-irrigated soybeans that could fall into that same description after catching several timely rains. But in other places, we were forced into later planting dates than we like or dealt with prolonged dry conditions, both of which can really hurt overall yield potential,” he says.

Farmers are hoping to build up on last year’s average yield, but it’s still premature to throw out any projected numbers.

“Last year’s state average yield for soybean was fifty-four bushels per acre,” says Irby. “For this season, it’s too early to say. I expect we will have areas where yield is on par with what we have seen in recent years, but other areas that were impacted more by lack of rainfall will be severely off from what we have seen the last few years.”

Farmers Still Lean on this Trio to Fill Acreage

“We didn’t have much of an early planting window so that’s a fairly significant accomplishment to get that many acres planted,” says Larson.  “It was hot and dry in the summer and the corn was all planted relatively late – the last ten days of April. It was hot in mid-June and hot in July – the early reproductive stages of corn. That will have some negative consequences as well.”

At press time (August 25), farmers were getting out and cutting corn and dodging rain showers.

“At some point it will pick up considerably. Once they get it dried down to a more manageable moisture content,” says Larson. “The yield will probably be somewhere in the neighborhood of being ten percent off of last year’s yields for irrigated corn and dry-land corn will be considerably more for off than that. We’ve had heat and drought stress this summer and it will take a toll, particularly on the dry-land corn. I wouldn’t classify it as average. It will be below average. Probably the bottom twenty-fifth percentile in yield potential.”

Farmers who planted wheat were helped by the war in the Ukraine as the Eastern European country produces nearly forty percent of the world’s wheat supply. They exported more than 47 million tons of wheat in 2021. Ukraine’s grain exports were down sixty-four percent in May of 2022 compared to the same time frame in 2021. Delta farmers planted before the war began and will be able to reap the wheat benefits.

“We’ve at historic lows for wheat and sorghum production the last five years,” says Larson. “The yield had been fifty-three  bushels per acre and that’s kind of middle of the road as yield potential. We had  rainfall in April that moderated wheat yields somewhat. Then dry conditions in May and early June so we went to harvest with little difficulty.”

Wheat acreage was at 75,000 planted acres, a little bit up from last year according to Larson. The price has fluctuated, but not as high as last spring.

“Still high enough to get growers interest to grow a winter crop just out of risk avoidance strategies,” he says.

Grain sorghum acres has dwindled over the years as well.

“It’s probably in the neighborhood of 25,000 acres if that. It’s primarily used as a livestock feed,” he says.

Overall, Larson notes the harvest for all row crops will “have a good harvest and get the crops out of the field and hopefully keep our heads above water to make a little profit or at least enough to pay the bills. It will be relatively tight with the low yield potentials this year.”

Insect Pressure High, Acreage Down but Price Up

Delta farmers planted less rice this growing season, but what they did get in the ground came at a price. Insects and a scourge of hot and dry weather took a toll on rice, but the markets rewarded farmers with a higher than average price for their hard work.

“Overall, it’s so far, so good,” says Hunter Bowman, rice specialist with the Mississippi State University Extension Service and researcher with the Mississippi Agricultural and Forestry Experiment Station. “It was really hot and dry when it the rice was  heading out and pollination was happening. But, hopefully that won’t have much of a detrimental affect.”

According to the U.S. Department of Agriculture Crop Progress and Condition report released in early August, rice was ninety percent headed and fifteen percent mature, which is slightly ahead of the five-year average. Fifty-two percent of the crop is in good condition. Twelve percent is in excellent condition, and thirty-three percent is in fair condition.

Another worry for farmers this year was the rice stink bug, which showed up in force. Rice stink bugs feed on the rice grain, stunting plant growth and reducing yield. These pests can also transmit diseases and viruses to the plants.

To make matters worse, farmers faced poor control from pyrethroids – the first line of defense and one of only three labeled pesticides were readily available to treat the pest in rice.

“Tenchu and malathion are the two other labeled options in addition to pyrethroids, but those pesticides were in short supply and dealers ran out,” says Bowman.

This situation led extension crop specialists to work with the Bureau of Plant Industry to request a Section 18 crisis exemption from the Environmental Protection Agency for an additional pesticide that would help farmers control the insects while not disrupting harvest. A crisis exemption was granted for the pesticide Endigo ZC near the end of July.

“We were able to get the exemption, but there was a limited supply of Endigo ZC, too,” says Bowman, who is stationed at the MSU Delta Research and Extension Center in Stoneville. “We had trouble getting our hands on the product.”

Bowman notes that there was only enough malathion this year to treat 50,000 to 60,000 acres across the entire U.S. While malathion has been in short supply for several years, the COVID-19 pandemic tightened supplies and raised prices on all kinds of pesticides.

“If producers were unable to get any of these alternatives, we recommended they run with extra applications of pyrethroids if they could get that,” says Bowman. “That way, it would reduce the number of stink bugs to low levels and help protect yield.”

“Rice water weevils are sometimes a problem for us, but this year, we avoided any major issues,” says Bowman. “Italian ryegrass in Mississippi has developed resistance to many herbicides we use for control in early spring, and herbicide options to control the weed in the fall when it emerges are limited due to plant-back restrictions in rice the following season.”

Bowman says Mississippi rice acreage is down quite a bit compared to the ten year average.

“We expected to plant about 100,000 acres, but we ended up with between 88,000 and 90,000 acres,” he says. “Some people decided to plant soybeans instead because of high urea prices and better soybean prices.”

Will Maples, Extension agricultural economist, said rice supplies in general are down , but prices are higher than in recent years.

Current projections by the USDA put the national average farm price at $15.50 per hundredweight, which is $1.80 higher than 2021. Since the first of August, the harvest month rough rice futures contract has averaged $17.28 per hundredweight.

“Even though rice producers are seeing higher prices, margins will likely be thinner than in years past due to increased input costs,” says Maples. “The combination of higher input costs and high prices for other commodities limited rice plantings this spring. Long-grain rice supplies are currently projected five percent lower than last year with ending stocks currently twelve percent lower.”