In thirty-three years of farming, Clay Adcock has never missed planting a cotton crop on his farm in the Holly Bluff area. But this year, about 500,000 acres of land in the Yazoo backwater area have been flooded for several months.

“Tell me anywhere else in the U.S. where 500,000 acres have been flooded for three months, and we would have some high officials coming here to see what could be done to help,” Adcock says. “We have been ignored because we are a rural area. But we are an important rural area with major productivity and a lot of wildlife. We have small towns with many good people who are really struggling.

“We missed planting a corn crop this year. I assumed I might be able to plant cotton afterwards, but it is looking like we are going to miss a cotton crop this year. You can’t unwind that investment in cotton equipment in one year. I am one of many farmers in the same situation.”

Adcock has a levee around his house to keep the water out, and his son has been living with him because power had to be disconnected because of water surrounding his house. Many residents are affected with a ripple effect on the local economy.

“You have a lot of people who are not farmers, but depend on the revenue from farmers and wildlife enthusiasts in this area,” Adcock says. “It is not all agriculture.  You have enough instability in the Delta, and this was something entirely preventable. The government will probably come out with the Mississippi Emergency Management Agency to help with some of this, but this is money the government didn’t have to spend. This could have been prevented.”

In 1941, Congress authorized the Yazoo Pumps Backwater Project that involved building levees and gates, and then using large pumps to drain the area when water backs up because of localized flooding combined with flooding on the Mississippi River. The levees and gates were built, but in 2008, the Environmental Protection Agency (EPA) vetoed the pumps after lawsuits from environmental groups. The primary reason for vetoing the pumps was allegations that it would destroy hundreds of thousands of acres of wetlands.

Adcock said the campaign against the pumps was misguided, and that failing to build the pumps has not only caused great economic harm to the area, but has also damaged wildlife and the wetlands.

“All the wetlands are now under three to ten feet of water, which changes the classification of wetlands,” Adcock says. “The EPA is actually in violation of Section 404 of the Clean Water Act by allowing the wetlands to flood and change the classifications of those wetlands. There are hundreds of different types of wetlands. You and I, the general public, cannot alter those wetlands without a permit. The EPA, by vetoing the pumps, has allowed our wetlands to altered. Instead of being flooded for days or weeks, now they are flooded for months. Our entire Delta National Forest, 250,000 acres, is under water. Most of the wildlife has died. We have pictures of the dead animals, including bears. It is a filthy, nasty mess caused by the EPA.”

The prolonged flooding is taking an emotional toll.

“You just can’t imagine how it wears on you, the constant worry,” he says. “It doesn’t make it any better when you feel like you are being ignored. Our congressional delegation has been very supportive. The governor has been very supportive. But we need more than that. Mississippi is the only state along the Mississippi River that doesn’t have a backwater pump. There are twenty-two other pumping structures within a 200-mile radius of us.” 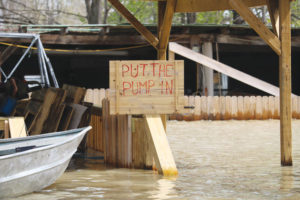 Another farmer, John Phillips, has been living in the area since he was born in 1949 and has been farming it since 1973. He says floods are becoming more frequent and lasting longer.

“About seventy-five percent of our land is under water, and it is questionable whether it will be planted or not,” Phillips says. “The flooding we are experiencing is new and different.  I don’t even remember a flood prior to 1973. In 1979, the levee was completed at Steele Bayou and it was supposed to solve our problems when the Yazoo Pumps were installed. Without the pumps in place, we are in a basin with no way to get the water out.”

It is stressful for everyone in the area.

“If people in our community can’t plant a crop in 2019, they cannot survive with no revenue,” Phillips says. “A farmer who can’t farm doesn’t last long. There is only one solution to the problem in the Yazoo backwater area and that is the pumps. That is just a fact. People say look for other alternatives, but there are none.”

He is also concerned that people will leave the area and the community will die.

“Flooding is not beneficial for anything,” Phillips says. “It is devastating.”

All kinds of businesses that depend on trade with farmers are impacted adversely. And so are homeowners. Ann Dahl retired from a job as preventative maintenance coordinator at Grand Gulf Nuclear Station a year and a half ago, and bought a house in Eagle Lake. “I knew nothing about backwater flooding,” Dahl says. “When the water started coming up in February, we didn’t expect how high it was going to get. I started researching at that time to find out how we got here. I looked at thirty years of history on the Yazoo Backwater Project, and I looked at both sides, people for the pumps and people against it. What I found out was appalling to me. This isn’t a natural disaster. It is a manmade disaster. It could have all been avoided if we had let the Army Corps of Engineers (COE) do their job.”

Dahl says the COE spent millions of man hours studying the solution, yet was blocked by EPA’s veto.

“The EPA says it could potentially damage 200,000 acres of wildlife,” Dahl says. “First off, it is only 189,000 acres and 125,000 are classified as temporarily flooding, to be flooded a few days to a few weeks at the beginning of the grow season. But they are now actually flooded for months at a time. EPA has done more harm to the land than the pumps. The pumps used as designed would protect the wetlands.”

Dahl also takes issue with environmental groups that said it would take 3,000 years to pay for the pumps.

“Ag loses alone since the veto are $373 million, and that doesn’t include people’s personal loses,” Dahl says. “I’m one of lucky ones. Water is not in my house, but I have to take 1.5-hour detour one way get to town. My boathouse and pier, banks and yard are completely under water and will be for at least a month to six weeks before the backwater will have gone down enough to let water out at Eagle Lake. None of these losses are covered by insurance. A conservative estimate to repair the damages of our Eagle Lake properties will be at least $7 million dollars.”

“It isn’t like a tornado or hurricane that is over quickly and then you can start the rebuild process,” she says. “It will be months literally before the lake is back to normal and we can start accessing damage and rebuilding. “ 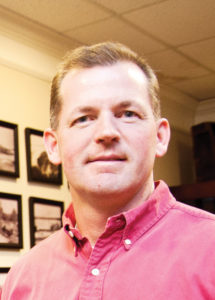 Peter Nimrod, chief engineer, Mississippi Levee Board, Greenville, said this is the worse flood event since the backwater levees and drainage structure were completed. He agrees the solution is the Yazoo Pumps. And he says that is economically justifiable.

There is hope with the current federal administration.

“We have new EPA leadership, and we do have some new information in the past ten years on wetlands,” Nimrod says. “The COE is working with the EPA going over the new data, and relooking at this project to see if there is a way that EPA could overturn that veto.”

In the meantime, it continues to rain heavily in the Mississippi River watershed. This past winter saw the highest rainfall totals in the contiguous U.S. in recorded history. Ten states in the watershed reported the most rain between March 1, 2018 to Feb. 1, 2019 in recorded history.

“The excess rainfall has been very widespread,” Nimrod says. “It was way up there as one of the wettest years by far. This portion of the Mississippi Delta averages fifty-fourinches per year. Last year, it was in the mid-70s. The problem with a backwater flood is it comes up very slowly and it is very slow to go away. There hasn’t been much relief in the past four weeks, and the next four weeks doesn’t look any better. The river is not expected to drop off in the next four weeks.”

When this article was written in mid-May, torrential rainfalls were continuing to be seen in the Midwest. The forecast was for above normal precipitation to continue. Nimrod said while the river stays several feet above flood stage, it prevents a significant amount of backwater getting out of the Delta.

Ag losses are huge, but only one part of the picture.

“We still have homes flooded or holding water back with ring levees,” Nimrod says. “You have roads and highways under water. And they are not going to dry up over the next month. We have a real issue. It is not just ag lands, but access to homes, school and work. Everything is difficult when you have to figure out how to drive on dry pavement to get somewhere. It is quite frustrating.”