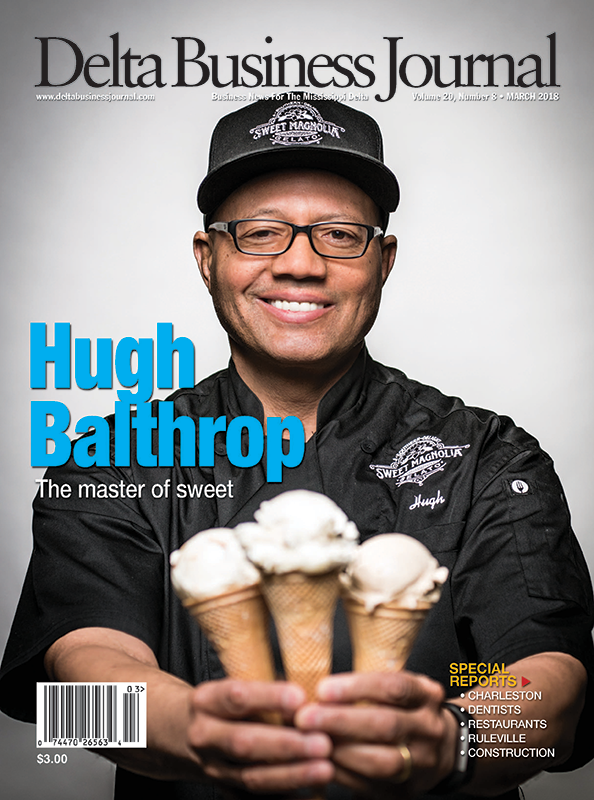 Clarksdale resident Hugh Balthrop got interested in making ice cream and gelato from superior ingredients for his wife, Erica Balthrop, and their three children.

He set out to simply make a better, healthier product, something that wasn’t mostly air like some commercial ice creams. His products were so well received by the family and friends that it led to Balthrop founding the Sweet Magnolia Gelato Company that is now housed in a 2,400-square-foot space in the Clarksdale Chamber of Commerce building and employs five to ten people.

Why gelato? Balthrop said it is a more intense in flavor.

“Where profits are in ice cream is the air pumped into it,” Balthrop said. “Some is 50-100 percent air. We do certain traditional Italian gelato flavors such as pistachio, Nutella, hazelnut and stracciatella, a process where we pour melted chocolate throughout the ice cream. It is an Italian chocolate chip basically.”

In addition to the traditional Italian flavors, they also put a little Mississippi Delta Southern twist interpretation to come up with unusual varieties like sweet tea, muscadine, watermelon, honey vanilla, Delta butter pecan, Ms. Mary’s poundcake, banana pudding and sorghum. And if none of those sound tempting, hold on. They are always trying something new and are now up to having made more than 300 different kinds of gelato or ice cream.

They are particularly proud of the Delta Gravel gelato that won an award from Southern Living. They have received national recognition for both their gelato and sorbet.

Even those with a sweet tooth might want to watch their waist. But Balthrop said their gelato is low fat. It has only eight percent fat as opposed to ice cream at 10 to 16 percent. They also have frozen yogurt and non-dairy, fat free sorbets.

“We have all kinds of options for people who watch their weight,” Balthrop said.

The business spreads its success by buying local and organic.

“Forming relationships with our growers, farmers and producers is a huge part of the Sweet Magnolia approach to gelato,” Balthrop said. “We find the best ingredients in the South—whether that’s cream from grass-fed cows, honey harvested by hand, or the very ripest fruits and herbs—so we can deliver the best product to you. We use organic ingredients as much as possible. We have always been health conscious. With three young kids, you want to instill a good nutritional balance.”

Some of the local companies he sources supplies from include Beanfruit Coffee Company in Jackson, the Brown Family Dairy in Oxford, the Indianola Pecan House, Peggy’s Blueberry Farm in Senatobia, Powell and Sons in Clarksdale, Shotwell Candy Company in Memphis, Tenn., Woodson Ridge Farms in Oxford and the Yalobusha Brewing Company in Water Valley.

“From day one we wanted to support the local economy, whether employing people from our community or supporting local farmers like Brown Family Dairy which provides us with milk and cream,” Balthrop said. “They had to buy more cows to keep up with production. We buy local honey from Mr. Harvey Powell just down the street. We use local eggs from Miss Ernestine Young. We try to use as many local purveyors as possible.”

“We are so proud to claim him as one of our own,” Levingston said. “Hugh’s company is a great member of Clarksdale’s business community. Sweet Magnolia produces a premium product. Hugh is tireless in his promotion of his company, as well as the community in which it is made. He sources as many components as possible for his gelato from local producers.”

Balthrop grew up in Washington D.C., and met his wife at the art gallery he owned in the Adams Morgan section of D.C. She lived in Chicago, and after a nine-month commuter relationship, they got married.

“She is a physician who grew up here in Clarksdale spending the summers with her grandparents,” Balthrop said. “We moved here in 2002 when she started working at the Women’s Clinic. We built a house. I was a stay-at-home dad for a while. We have non-traditional roles in our family. Often my wife has to be at work early for surgery. So, I took on the role of doing all the cooking. The gelato making started because when you have young kids, you always want to do something fun for them. Plus, my wife and I are foodies.”

He started with a Cuisinart ice cream processor, but then as his entrepreneurial spirit kicked in, he started looking for the next level up.

“I came across this gelato machine straight out of Italy that is a superior piece of equipment as opposed to all of the others out there,” he said. “I got my hands on every book I could, and did online research. When I got my first gelato machine, in addition to making gelato for friends and family, I started offering it to some local restaurants. Sometimes I hit it out of the park with my recipes, and sometime I didn’t. I would go back to the drawing board if it wasn’t up to their standards.”

He also took time to get educated about the science of making frozen desserts after finding a course on the topic at Penn State. And he kept knocking on doors of restaurants and grocery stores offering free samples.

The Sweet Magnolia Gelato Company is now in its seventh year. Their children—Ayinde, 15, Mhina, 12, and Emika, 9—have grown up with the business. And the business has grown far beyond what they initially ever dreamed as the product is now carried by Kroger’s and Whole Foods.

“Our footprint goes from Nashville to Knoxville to Memphis to the Gulf Coast over to Atlanta. We just got into Central Market in Texas. We’re picking up new clients all the time.”

Business slows down in the winter, when the favorite flavors are peppermint bark, chocolate mint, butterscotch, eggnog and peppermint candy. Sales start picking back up in February and March.

The product is not cheap, reflecting the higher cost of quality ingredients.

“It is not cheap because we are not mass producing everything,” Balthrop said. “It comes at a premium. A pint is about $8. What I try to stress is we are supporting local people and stimulating the local economy, so I need conscientious consumers to understand that.”

Just as he had learned earlier when operating an art gallery, it is important to be creative with your marketing. They have taken advantage of social media such as Instagram, Facebook and Twitter. And they have worked with some of the best chefs in the country including part of the Delta Supper Club, a popup created by Stewart Robinson, Chemmy Hargrove and Dave Cruise. There have been popups at Clarksdale at the Roxy, at the Tunica River House and at the Dockery Planation.

“We’ve been a part of that since day one,” Balthrop said. “We work with chefs throughout Mississippi and Memphis.”

Up until now they have been a wholesale business, but are considering retailing, perhaps in partnership with a distributor.

“Right now, we are delivering everything ourselves,” he said. “We have a freezer truck, a van and a car. We could scale up the volume if we had a distributor. We are also looking at creating a food truck and are considering opening a retail outlet.”

Balthrop is well aware of the statistics that most businesses fail within the first five years. He has a sense of accomplishment from not just surviving, but growing each of the seven years they have been in business.

“We feel good about where we are and where we are going,” Balthrop said. “The community has been extremely supportive. To me it makes sense to want to support your community even though it may be pricey. Small business has it challenges. We try to meet those, exceed expectations and raise the bar.

“We have created something special here. We have all kinds of visitors from all over the country. We aren’t making a lot of money, but we take pride in creating jobs supporting all these local farmers. It is also about relationships. The economy is rough in this area. At the end of the day I want to make money, but also feel good about what we have done with the business.”