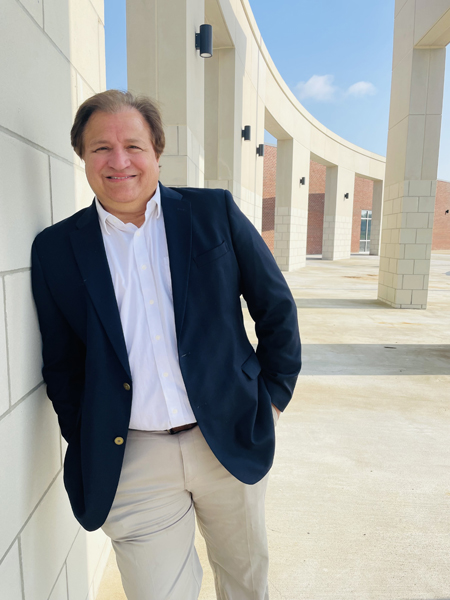 Joe Azar has mixed the best the Delta has to offer to create sweet economic development across the Magnolia State. These days nobody’s “Waitin’ On Joe” but trying to catch up. The older brother to Delta music talent Steve Azar, Joe has used his skills, first learned working for his father in construction, and then with his brother in the music industry as a sound engineer, to craft his own path in Mississippi.

Azar  is CEO of the Panola Partnership which is a mix of the office of economic development, tourism, main street, human capital development, and Chamber of Commerce for all of Panola County.

“Our goal has always been to raise the living wage. People making more money is a good thing, especially in the Delta,”  says Azar.

Before joining the Panola Partnership, Azar was the Equity Manager of the Southern Beverage Company in Batesville and the General Manager of Mississippi Distributors. When he graduated from Ole Miss back in 1981, he got into retail convenience as the owner of The Barn for ten years in Greenville. It was in 1991, that he joined with his younger brother, to help manage his career, work as a music publisher, tour manager and studio and live sound engineer.   He worked with several artists including,  Jessica Andrews, Hank 3, The Crickets, The Outfield, and Vince Neil.

“It was a real blessing. I had the opportunity to  mix sound in Madison Square Garden, that was one of my goals.”

“After sixteen years on the road I moved to Batesville,”  he says. “That was in 2007. My uncle owned a beer distributorship that he was selling and I went to work for him,” he says.

When the business sold the new owner asked Joe to stay on and continue running the distributorship. After four years, Azar left to take on a challenge with Panola Partnership.

“I went back to school at Southern Mississippi and received my Master’s in Economic Development,” he says.

For the past two years, Azar has been working to bring two solar farms to Panola County with former Nashville Mayor and Governor, Phil Bredesen. The project was officially announced in mid-May.

“I have a passion for all of the Delta and I love being part of Delta Strong,” says Azar. “Now we’re looking at forming a Tallahatchie River Authority. One of the first things I want to see it do, is help the farmers along the Tallahatchie River with flood control.”

The Panola Partnership has previously partnered with Northwest Community College to create a Regional Concourse in 2019 to create regional workforce development. The successful first campus has led to a second campus that will offer seven aviation programs and will feed students to Delta State’s aviation program.

“When it’s all said and done, we’ll have 1,400 students a year training in Panola County,” he says.

Azar and his wife, Katie, have two children, Joey and Delaney.