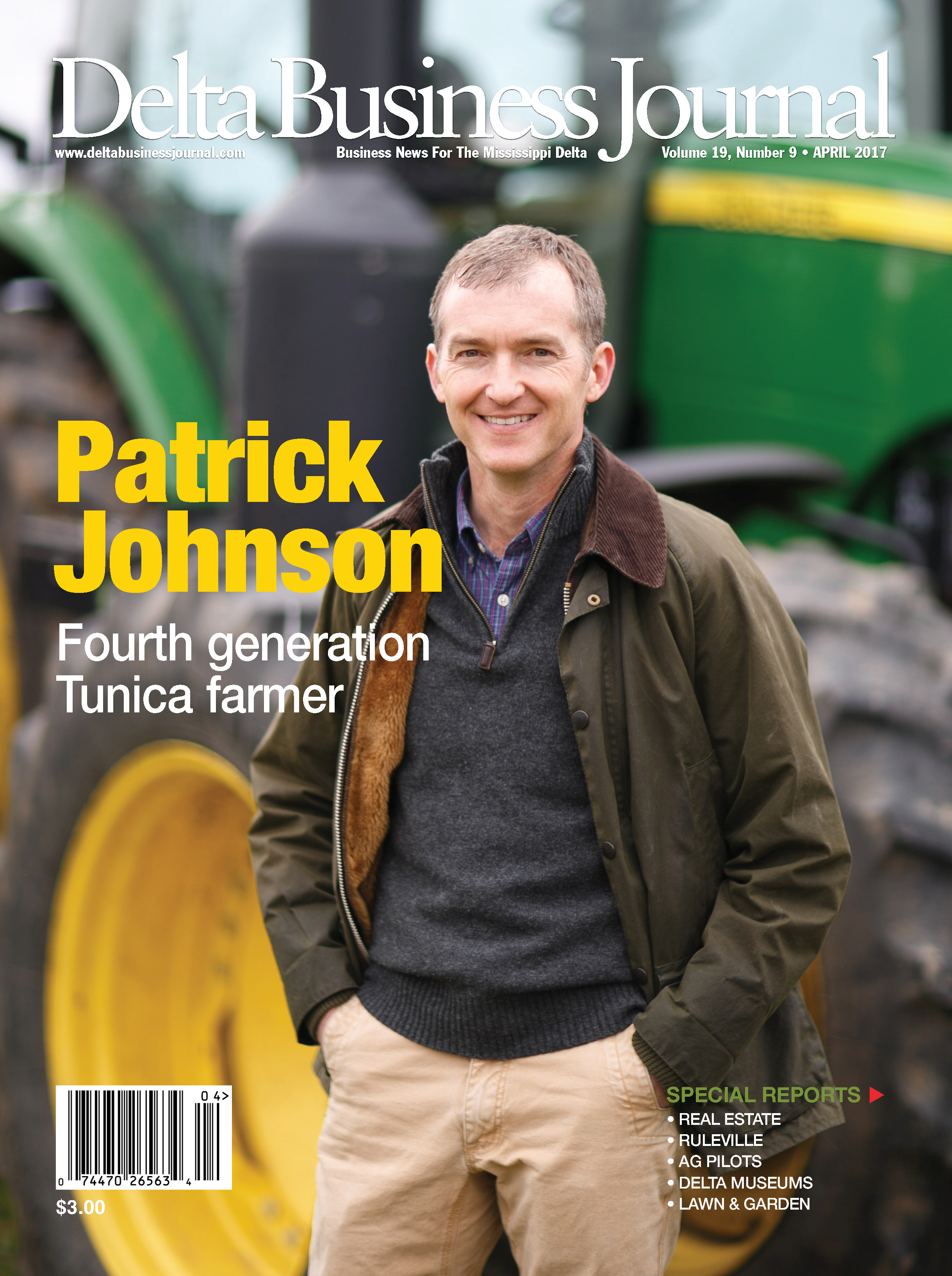 Patrick Johnson and his father, Pat, have traditionally planted a lot of cotton on their farm in Tunica County. Even while cotton acreage in the state decreased sharply in recent years due to low prices, the Johnsons did not sell their cotton equipment. That puts them in good shape to participate in a cotton comeback this year.

“Because we kept our equipment, it won’t be that difficult for us to increase our acreage,” says the younger Johnson, who serves on the Delta Council and is the current chairman of the National Cotton Council Environmental Task Force. “The harvest equipment is the most expensive piece. It is so expensive that you really need a good volume of production to justify buying it. In recent years with cotton prices down, the only way we could justify the expense was by picking other people’s crop, as well as ours.”

“On our farm, we are going to have a big increase in cotton acres this year and that will be representative of many operations in the Delta,” Johnson says. “I think it will be a good thing for cotton to come back because it provides an economic impact you don’t necessarily get when you are loading grain on a truck and hauling it to the river for export.”

Johnson said there have been some years he got the same price for cotton as his grandfather. This year while cotton prices aren’t great, the potential for profitability is higher than with corn and soybeans.

“It is not a great situation, but cotton becomes the best option because the other crops aren’t as good as they were three or four years ago,” he says.

The Johnsons started growing rice in the 1990s, and that crop has been great for them. Yields are more consistent than anything else they grow.

Overall, it is a challenging time for the ag economy of the Delta and the U.S. Growers have had to adjust to major decreases in prices for commodities like corn and soybeans.

“Cost of inputs and land rents increased because commodity prices were so high several years ago,” Johnson says. “Now that we are transitioning into a time of lower commodity prices, it has made budgets really tight on farms in the Delta. Input costs for seed, chemicals and fertilizer keep going up. And equipment costs are a big expense for farming that only go up, for sure. Every year as time passes, you have more money tied up per acre than the year before.”

On the positive side, ag technology continues to improve. That covers the seeds planted, the equipment used, and the practices used on the farm.

“The technology is getting better,” he says. “Really, it has to be for us to be able to make a profit. We have to continually work to be more efficient and find ways to get higher yields. You have advancements that are being made by the Cooperative Extension Service in the public sector and you also have private companies investing a lot of money and doing research to develop better varieties and better technology.”

Over the past 20 years he has been farming, he has seen major improvements such as the use of GPS for precision agriculture that allows growers to make variable rate applications that only put fertilizer where it is needed. Johnson said in addition to cost savings, that is a more environmentally friendly practice.

“In agriculture right now, like a lot of other business, sustainability is becoming an important topic we have to address,” Johnson says. “And we are addressing it. One of the great things people don’t necessarily realize about farming in this day and age is that farmers want to be progressive and implement conservation and the best management practices because all these inputs cost money. There is an environmental benefit and a benefit to our bottom line, as well.”

One sustainability strength he sees for the area where they farm is there is a good water supply. With severe droughts in some other areas of the country and the world, no one takes water for granted any more. Water levels in aquifers in the Delta are declining, and pumping groundwater is expensive. So steps are being taken to be more efficient in irrigation water usage.

“Making sure we have water available in the future has become a high priority for farmers in the Delta,” Johnson says. “That is a big area where you are also seeing technology implemented in our irrigation practices to conserve water. The Cooperative Extension Service is doing a lot of research on how to be more efficient with irrigation polypipe, and we are now using computerized hole selection in the irrigation pipes. You put a description of the field into a computer program and it tells you how to punch the holes to water the fields evenly and have less waste. That is something that has gained a high adoption rate in the past few years.”

Delta Council Executive Vice President Chip Morgan says Johnson has been extremely progressive with regard to conservation and environmental issues.

“He has been one of the key spokesmen relative to water management in the Delta, which is the biggest resource we have,” Morgan says. “He has been an advocate of everything that needs to happen in order for us to ensure that future generations have sufficient irrigation supplies to continue making profitable yields. Patrick has been very active in our Delta Council Research and Water Resources Committee. He has been to Washington D.C. many times with us to meet with EPA about crop protection registration, and the challenges we have with not being able to get access to new technology because of how slow the regulatory process is.”

Johnson is known being proactive in studying issues of concern to agriculture such as the decline of honeybees that some have blamed on long-lasting agricultural pesticides.

“Patrick works with the bee specialists and with the crop protection industry,” Morgan says. “When it comes to the honeybee pollinator issue, there is nobody in the U.S. who has had a bigger role in the farm community in meeting this problem head on both at the end of the turn row and in Washington. Patrick has studied the pollinator issues, and has bee keepers on his farm. He has met with bee specialists at Mississippi State. He knows precisely what the problems are, and how to prevent them. And he has taken the steps to do it. That is just his nature. His is quiet and understated. That is just his nature. But he is a problem solver. He works with science to find where the problem really lies.”

What are the biggest challenges in agriculture today?

“We are always we are at the mercy of Mother Nature when it comes to the weather,” Johnson says, who graduated with a degree in biology from Ole Miss in 1996. “That presents a challenge for us. But the biggest thing from the business standpoint is that commodity markets are global. That means that the things that affect our crops locally don’t necessarily impact the commodity markets. So that can also be difficult. We are growing a crop and most of the time we don’t know what we will get for it from a price standpoint. We market our cotton and rice through two marketing cooperatives, Staplcotn in Greenwood and Producers Rice Mill in Stuttgart, AR. But we’re on our own marketing our other grains, and it’s always a challenge to do a good job with that.”

“We got into that business with my uncle and cousins because it integrated so well on the farming side because we grow a significant amount of rice,” Johnson says. “The aerial applications are made in rice when fields are flooded and you can’t do it with the ground equipment. If it rains and conditions aren’t right to get in the field with a ground sprayer, farmers will use aerial application in any crop. On all crops, application timing is critical. So at the air service we work to be sure that applications are made on time for our customers, as well as on our own farms.”

The Johnsons have been in Tunica for a long time. Johnson is the fourth generation member of his family to farm on land located just south of Tunica. He and his wife, Emily Johnson, live in Tunica where they are involved with the Tunica Presbyterian Church. Johnson is also on the board for the Tunica Chamber of Commerce.

For recreation and fitness, Johnson plays tennis and rides a bicycle.

“There is a group that has gotten into cycling in town,” he says. “I mainly do it for the fitness, but then there is also just the comradery. We have a lot of fun.”