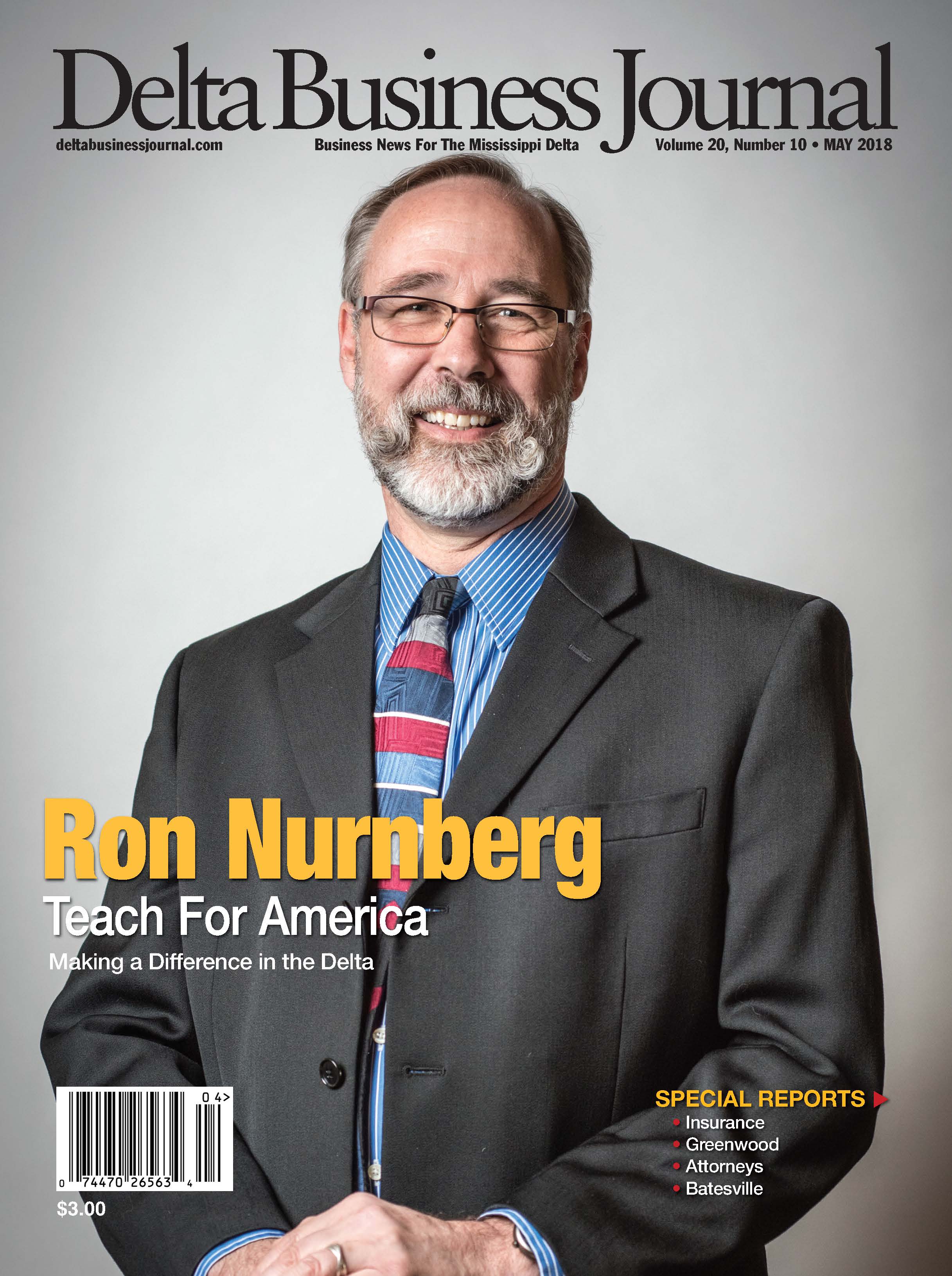 Education is the key

Ron Nurnberg is deputy executive director for Teach For America (Mississippi), a non-profit organization that’s mission statement is to enlist, develop, and mobilize as many of our nation’s most promising future leaders as possible to grow and strengthen the movement for educational equity and excellence.  And as of June 1, 2018, the area that Nurnberg oversees, Teach For America, Mississippi, will become known as Greater Delta instead.

“We are bringing the Arkansas Delta back in with the Mississippi Delta,” Nurnberg says. “It was that way for over 20 years and then we cleaved it 2013, and now we’re bringing it back.”

Before his TFA and Oxford, Miss. days where he now lives, home for Nurnberg was a small town in south central Iowa called Arispe, which during a good year can boast about 85 people. “Including cats and dogs,” he laughs. Getting from that tiny spot in Iowa to where he lives and works today in Oxford was a bit of a circuitous route.

“Two sets of my grandparents are from the South,” Nurnberg says. “One from Kentucky and one from Tennessee. So, our family might have been a bit peculiar for the Midwest, because my Kentucky grandmother’s fried chicken was beyond anything I had experienced anywhere in Iowa. So, I always had an interest, both from reading history and literature, in the American South. And I’m sure part of that had to do with the family connection too.”

Nurnberg was the youngest of four children. He spent his freshman and junior year of college in Pella, Iowa, at a private university, while going to university for his sophomore and senior year at Trinity College in Wales.

“And I fell in love with Wales,” he says. “I wanted to study in Europe and I wasn’t that good with languages. I didn’t want to sacrifice my grade point to try and get good with a language, so Trinity College in Wales was originally a training school for the  Anglican priesthood. But by the time I came along it was more of a liberal arts school.”

Nurnbery realized he could take classes in the medium of English or Welsh, so he took all of his courses in English. His friends there were first language Welsh, and he says he spent a lot of time in the pub then.

“So I became fluent in Welsh, especially with a pint in my hand,” he laughs. “But after college I went back and did an intensive Welsh language course, so I became very fluent.”

Nurnberg finished college with a business and communications degree and thought he would go into banking in Chicago. But his newfound love of Wales took him on a different route.

“The director at that time of the American program I had gone to school on was from St. Louis, he and his wife,” Nurnberg says. “And they decided they were going to open up a Welsh pub and restaurant in St. Louis about the same time I was finishing up my business degree. They offered me the opportunity to become a partner with them in the new business. So, I thought, do I want to wear a white shirt and a tie for the rest of my life? Or do I want to be around things that I really enjoy, which is food, drink and people. And I could spend a good deal of my time in Wales, if I wanted, so I chose the latter.”

In December 1980, Nurnberg went to work for his St. Louis friends and helped to grow Dressel’s Pub in the West End into a thriving business.

“It became a place where you could come for a good meal, an honest drink and interesting conversation,” he says.

It was while he was working at the pub in St. Louis he met his partner, Joe Osgood. When they got tired of the St. Louis winters they’d head south to Alabama to visit friends and relatives as well as in Vicksburg. One time while visiting Dr. Lucien and Lois Ferris in Vicksburg, Nurnberg discovered a book Lucien’s nephew, William Ferris, had co-written about southern culture. At that time, William Ferris, ran the program for Southern Studies at Ole Miss. Immediately, Nurnberg was fascinated and knew he wanted to go through the Southern Studies program. A few years later, Oxford began calling and he applied and was accepted into the Southern Studies program at Ole Miss.

In 1993 he enrolled in the program. Because of his connection to Vicksburg, he was sent there to do some work. He persuaded the then mayor of the Vicksburg and aldermen to put up $1.25 million to purchase a historic complex downtown and turn it into a cultural center. The purchase took place and Nurnberg launched the search for the first executive director of the center.

In May 1996, Nurnberg was offered a position at Teach for America.

“They were looking for someone who believed in the educational potential of the Delta in Arkansas and Mississippi, and I did,” he says.

Today, he is deputy executive director where he oversees the development of the innovative and operational side of the entity’s work.

“I have been with Teach For America for 22 years. In 1996, I had 32 first and second year teachers, and five people who had stayed beyond the required two-year commitment. By 2013, I had grown us up to 554 first and second year teachers throughout the Arkansas and Mississippi Deltas. And we became so staff-fatigued that we decided to cleave Arkansas into its own region and keep Mississippi in its own region. We had enough teachers then that the two regions could stand on their own.”

Nurnberg says there are currently 53 regions nationwide that Teach For America educationally assists, 12 of which that have a rural component. After they cleaved in 2013, they began to see the Mississippi/Arkansas application numbers fall, due in part to state educational budgets, and other factors.”

There is a smaller pool for the rural regions, so the lack of applications hit us pretty hard, and we decided to bring the two areas back together again.”

Nurnberg loves Oxford and Teach For America. He summarizes his life, up to this point, by saying:

“Whatever I’ve done; it’s almost as if I have fallen into it. But I have been quick to recognize opportunity and to seize it. And I’m not following along blindly. As long as I can combine the things that are meaningful and passionate in my life, such as food, people and drink, and education; combining the world I experienced in Wales with St. Louis, combining that with my work in Southern Studies and my work in Vicksburg, it’s amazing. I so love my adoptive state of Mississippi, and I’ve always been able to have my cake and eat it too when it comes to combining the loves and passions in my work and life, and in making it all meld together very cohesively.”