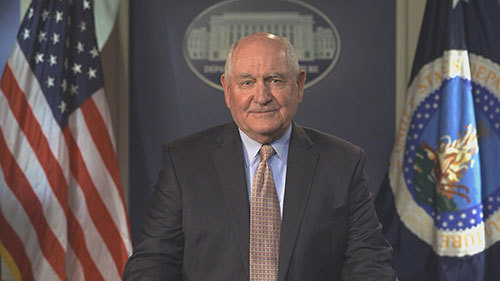 U.S. Secretary of Agriculture Sonny Perdue has announced the creation of an undersecretary for trade and foreign agricultural affairs in the U.S. Department of Agriculture (USDA), a recognition of the ever-increasing importance of international trade to American agriculture.  Perdue made the announcement standing by barges filled with agricultural products along the banks of the Ohio River.  As part of a reorganization of USDA, Perdue also announced the standing up of a newly-named Farm Production and Conservation mission area to have a customer focus and meet USDA constituents in the field.  Finally, Perdue announced that the department’s Rural Development agencies would be elevated to report directly to the secretary of agriculture in recognition of the need to help promote rural prosperity.

Perdue issued a report to announce the changes, which address Congressional direction in the 2014 Farm Bill to create the new undersecretary for trade and also are a down payment on President Trump’s request of his cabinet to deliver plans to improve the accountability and customer service provided by departments.

“Food is a noble thing to trade.  This nation has a great story to tell and we’ve got producers here that produce more than we can consume,” said Secretary Perdue.  “And that’s good, because I’m a grow-it-and-sell-it kind of guy.  Our people in American agriculture have shown they can grow it, and we’re here to sell it in markets all around the world.”

Agricultural trade is critical for the U.S. farm sector and the American economy as a whole.  U.S. agricultural and food exports account for 20 percent of the value of production, and every dollar of these exports creates another $1.27 in business activity.  Additionally, every $1 billion in U.S. agricultural exports supports approximately 8,000 American jobs across the entire American economy.  As the global marketplace becomes even more competitive every day, the United States must position itself in the best way possible to retain its standing as a world leader.

“Our plan to establish an undersecretary for trade fits right in line with my goal to be American agriculture’s unapologetic advocate and chief salesman around the world.  By working side by side with our U.S. Trade Representative and Secretary of Commerce Wilbur Ross, the USDA undersecretary for trade will ensure that American producers are well equipped to sell their products and feed the world,” Perdue said.

USDA’s reorganization seeks to place agencies in more logical order.  Under the existing structure, the Foreign Agricultural Service (FAS), which deals with overseas markets, and the Farm Service Agency (FSA), which handles domestic issues, were housed under one mission area, along with the Risk Management Agency (RMA).  It makes much more sense to situate FAS under the new undersecretary for trade, where staff can sharpen their focus on foreign markets.

Undersecretary for Farm Production and Conservation

Additionally, a new undersecretary will be selected for a newly-named Farm Production and Conservation mission area, which is to focus on domestic agricultural issues.  Locating FSA, RMA, and the Natural Resources Conservation Service under this domestically-oriented undersecretary will provide a simplified one-stop shop for USDA’s primary customers, the men and women farming, ranching, and foresting across America.

“The men and women of American agriculture are hardy people, many of whom were born into the calling of feeding America and the world,” Perdue said.  “Their efforts are appreciated, and this adjustment to the USDA structure will help us help them in even better ways than before.”