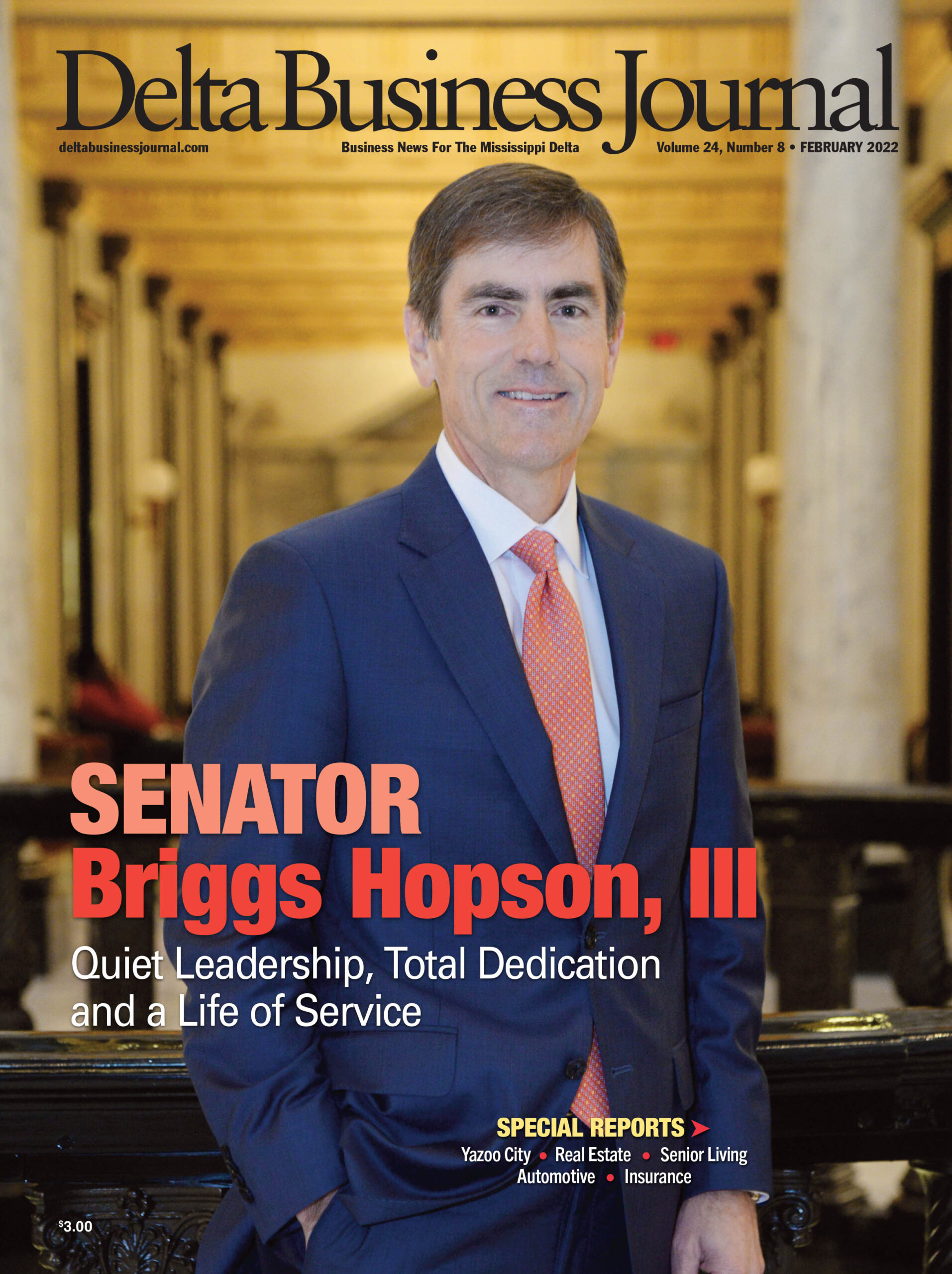 W.Briggs Hopson, III is a true  example of Mississippi public service at its finest. His love of community and state is unsurpassed as is his desire to improve the lives of all those he represents, whether in the private or public sector.

Born in Memphis in 1965 while his renowned father, the late Dr. Briggs Hopson, was in medical school, the Hopson family moved to Vicksburg two years later where the family established themselves.

“Vicksburg was a wonderful place in which to grow up,” says Hopson. “I had so many great friends and good times. My three siblings and I probably couldn’t have asked for better childhoods. I graduated from Warren Central High School in 1983 and then went on to Ole Miss to get my undergraduate and Law degrees.”

One of Hopson’s close friends while growing up was Jim Fordice, son of former Governor Kirk Fordice, who was not very excited about Hopson’s choice in career direction.

“I well remember him giving me such a hard time about becoming a lawyer,” laughs Hopson. “He said, in that inimitable tone of his, something like, ‘Why in the world would you want to do that!’ In spite of his ribbing, I was always close to the Fordice family and I still am.”

Another central figure in Hopson’s life was more supportive in his choice of law and that was his father. Hopson says that there was never any pressure from his father to enter the medical profession which he himself was so prominent in the Warren County community.

“I think it crossed my mind a few times to possibly pursue a medical career,” recalls Hopson. “But, my father never pressured me or my siblings in any way to follow in his footsteps. He encouraged us to follow our own passions. I just never enjoyed chemistry or biology in school and he knew that.”

After obtaining his J.D., Hopson was hired by a large New Orleans law firm where he practiced law for three and a half years before moving on to another firm on the Mississippi Gulf Coast where he worked for another three and a half years. He made the decision to return to his hometown at the end of 1996. However, he started his own firm with old friends and fellow attorneys Blake and Landy Teller, among others. The firm, located in Vicksburg, is Teller, Hopson & Schrader, LLP.

“Initially, in my law career in New Orleans and on the Coast, I specialized in a great deal of maritime law and litigation,” says Hopson. “But, when I returned to Vicksburg my range of work broadened to include representing businesses, hospitals, school districts—basically I became involved in a wide swath of litigation and enjoyed all facets of my work very much.”

And, while he dabbled in school politics while at Warren Central and Ole Miss, Hopson reveals he never actually planned to get involved in politics at any higher or more significant level. “I was enjoying my law practice and doing well,” he says. “But, at some point I looked around my community and my state and wondered how I could contribute to the betterment of the lives of those around me. It wasn’t any sudden epiphany—just a gradual realization that the best way I could affect change would be through the political process.”

So, with no prior political experience, Hopson ran for the Mississippi Senate as a Republican in 2007 and won his first race. He was sworn into office in 2008, representing the 23rd District, and remained in the Senate ever since, winning out in his re-election bids. “And, here in the Mississippi political world, as opposed to the national level, both sides of the aisle generally work well together and are cordial to one another,” notes Hopson. “That says a lot about our state and about the men and women who serve alongside me in the public spheres.”

Hopson says he is proud of the work he has done in the Senate but that his highest concern is giving the taxpayers of the state of Mississippi the best possible return on their dollars. “As Appropriations Chair, that is paramount to me,” says Hopson. “And, has been my primary focus for my whole career. Specifically, I’m proud of the Distance Learning Act that I authored a few years back to ensure that all school districts (and students) have access to quality teachers wherever they may be located. Resources can be accessed through the State Department of Education that can be utilized statewide by any teacher in any location. I think this accessibility has been, and will continue to be, a game-changer for Mississippi. It’s imperative that we continue to make improvements to education here in the state and I’m glad to report that we are. We must remain competitive and provide the best possible opportunities both for our students and teachers.”

And, while it can be a challenge to balance his private law practice with the demands of his Senate work, Hopson enjoys it and says his hard work is supported on all sides.

“My family and my law partners are very understanding and incredibly supportive,” he says. “Certainly there are a lot of long nights, early mornings and weekends spent working but I believe that I have always been able to provide the best service I possibly can to my law clients and represent my district to the best of my abilities, as well. Again, though, I couldn’t do the work I do alone—there’s no question I depend on a lot of people and I’m grateful to them.”

Married to the former Alison (“Ali”) Quaid for twenty-six years, Hopson and his wife have three children: twenty-four-year old Liam, a Ole Miss grad who lives in Dallas; Walt, who is twenty-two and is a senior at the University of Southern Mississippi; and Jane, who is a freshman at Ole Miss. Family is extremely important to Hopson, including the memory of his father, who passed away almost two years ago.

“He was the greatest influence in my life, without a doubt,” says Hopson. “Not only was he a great father, and a hero to me, he was also a man to admire because of the love of his medical practice and all of the community work he was involved with, even to the end of his life.”

An avid golfer and runner, and voracious reader (his last completion being a volume on Winston Churchill’s first year as Prime Minister) Hopson says he especially enjoys traveling with his family, when able, to relax and unwind.

And, as far as future political aspirations? Hopson laughs before answering. “At this point, I’m just happy and content to be working for and representing the people of the 23rd District. I’ll cross future bridges when I encounter them,” he says. “I’m in a great spot right now, in my life, career and Senate work, and don’t see any urgent need to change that any time soon.”

With a large part of his district located in the Delta, Hopson says he has a strong affinity and love for the area. “Without a doubt,” he says. “Many of my closest friends and associates live there and looking back, I can say I’ve had some of the best times of my life in the Delta.”