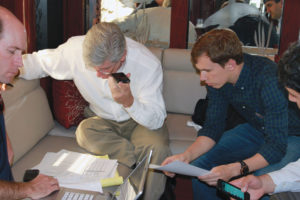 Bryant recently after the resignation of former State Auditor Stacey Pickering, grew up in the small town of Sandersville, which is located near Laurel. His family sometimes struggled to put food on the table, but gave him a firm foundation in the values of faith, hard work, discipline and diligence.

After strenuous work summers with his father and grandfather in the oilfields of Jones County, White set his sights on law school. After earning a B.S. in economics from the University of Mississippi, he went on to experience very different cultures while earning graduate degrees from two of the top universities in the world: The University of Oxford in England and Harvard University.

The prestigious Rhodes Scholarship is awarded each year to only thirty-two people.

“It isn’t often Mississippi gets a Rhodes Scholar at all,” White says. “I was the first one in ten years from the University of Mississippi. They pay for you to do a course of study at the University of Oxford. It was an incredible experience. Several Rhodes scholars have gone on to achieve good things in business and politics including Bill Clinton and Bobby Jindal. For me, to get the chance after undergrad to go abroad was really eye opening. It made me appreciate Mississippi, my home state, more.”

He also appreciated the opportunity to interact with people from all over the world. He was often in the company of extremely bright people with strong beliefs.

“I had the opportunity the learn and to defend my views and convictions, which was important for me to formalize what I thought, and how my values played out in terms of policy,” White says. “That was a critical period for me in making me what I am and shaping what I wanted to do with my life.”

White found many people in England were left of center. But he also appreciated they were very cordial and willing to engage in conversations with people who had opinions. Largely, there were not a ton of negative perceptions about Mississippi. 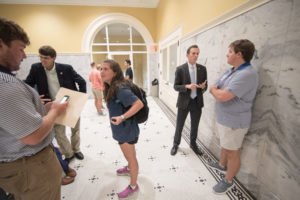 “There was more fascination,” White says. “When I went to Harvard, it was the opposite. By and large people were left of center, and a lot of folks had no interest in being friends with someone with different views. There were a lot of negative perceptions around Mississippi. It taught me a couple things. I realized that, for many people, I was the only person from Mississippi they had met. So, I needed to be a good ambassador for the state. It taught me you have to stick to your values and what you believe. Just because someone doesn’t like you doesn’t mean you change the way you believe. It is important to remain thoughtful about what you believe about the world and be able to defend your views. It taught me, too, how fulfilling it is to stand up for what you believe in.”

While at Harvard Law School, White was president of the Federalist Society, a conservative legal association, and brought speakers to campus to discuss topics such as the legality of public prayer, the morality of work and free enterprise, and the importance of traditional moral values.

“I got involved very early and ran for president of our chapter,” he says. “While I was there, it became the largest chapter of the Federalist Society in the country. We built up a good group of students, and also went out and raised money to bring speakers to campus to talk about issues we care about that were often controversial on campus. We thought it was important to expose people to ideas they were not necessarily hearing in law school.”

He has also worked in private practice as a lawyer, was a special prosecutor in Rankin County, and was a fellow at a national think tank on state policy at the Pew Charitable Trust. White earned a certificate in forensic accounting from the University of North Carolina at Charlotte. He was director of the Mississippi Justice Institute where he worked on cases against public officials who violated Mississippi’s open government and ethics laws.

He considers the work at the Mississippi Justice Institute good preparation for his current job as State Auditor.

“I learned there will be people who bend or break the rules,” he says. “It doesn’t matter what party they are in. Someone has to hold them accountable. I am very excited about this job. I would not have asked the governor for an appointment to anything else. I think this job is especially important. My aspiration is to do as well as I can here and run for a full term in 2019.”

Gov. Bryant, a former State Auditor himself, feels he found an ideal person to serve in the office.

“Shad’s credentials and ability are without question,” Bryant says. “He has proven himself a champion of limited and efficient government that serves the taxpayers. I knew when I appointed him auditor that he was the perfect fit for the office. State government is lucky to have him, and I look forward to him serving Mississippi for many years.”

White’s late grandfather, Charles White, played a big role in his life. His grandfather spent his life working very hard for not a lot of money.

“I was raised to believe you have a responsibility to take care of yourself and your family and not to depend on the government for work.,” he says. “My parents shaped me a lot, too. Even though we didn’t have a lot of money, I grew up in a very stable family My parents taught me the family unit is incredibly important for creating a strong society.”

His father, Bob White, was alderman for many years before becoming mayor of Sandersville.

“I grew up seeing Dad serve as an elected official in town for almost nothing,” White says. “The reason he did it wasn’t the $50 a month or whatever he got. It was because he cared about the town. I was taught you should make a sacrifice for public service. You take a job like this not because you want to make money, but to look back on your life and be proud of something you did for Mississippi.”

White wants to make sure hardworking people have their tax money spent wisely.

“I think there are two big pieces to this job,” he says. “One is making sure when people steal or embezzle public money, our investigations hold them accountable. The other is making sure that we audit public money to make sure it is spent properly and efficiently. For me what is exciting about the job is every single day at the end of the day, I can point at something we did to get money back for the taxpayers. That is incredibly fulfilling.” 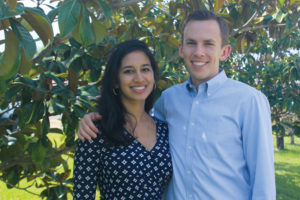 White’s parents also set an example of the importance of church. His father is minister of music at their church. His mother, Emily, a school teacher, played the church organ for years and is now in the church choir. White and his wife, Rina, are members at St. Richard Church, Jackson.

The Whites’ favorite weekend getaway is to visit the Delta.

“We love visiting the Delta to eat food and go places like the B.B. King Museum and the Ground Zero Blues Club,” he says. “In terms of hobbies, I play guitar and occasionally will sing country music at weddings. It is an odd sort of hobby, but I enjoy it. I play indoor soccer. I grew up playing soccer and still play once a week.”