Numerous Projects in the Works in Downtown Clarksdale

Numerous Projects in the Works in Downtown Clarksdale

Clarksdale’s downtown revitalization is under way, and plans including multiple new venues have built a plethora of high hopes. 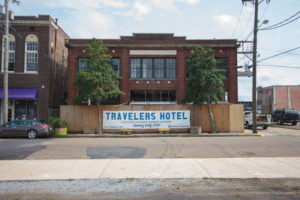 Soon to be home to Hooker Grocery and Eatery, the town’s first hostel, Auberge Clarksdale, and the Travelers Hotel, Clarksdale’s glory days may still be ahead.

“I fell in love with the Delta and Clarksdale,” he says. “Given the quality of music and friendliness of the town, I thought it’d be great to help or to, at least, be a part of this sort of renaissance of downtown.”

A fun, casual eatery seemed ideal, and Meier bought the Big Pink Guest House, formerly Oxbow, and the Little Pink building on John Lee Hooker Lane to open Hooker Grocery and Eatery. But opening the restaurant won’t satisfy Meier’s desire to give back to Clarksdale.

“I wanted to be involved with the annual Deep Blues Festival, so I joined the festival planning committee,” Meier says. “It was concurrent with my purchase of the property, and now, we’re hoping to put on a heck of a music fest this October.”

Revitalization efforts have been several years in the making, but nothing’s wrong with slow growth. Meier says slow growth lets you figure things out without the pressure of a ticking clock.

“Obviously, there’s more work to be done,” he says. “But it’s about seeing what can be done, bringing more music and services back to the downtown, and then saying, ‘OK, what else can we do?’”

Meier says festival tickets sales are booming and the committee’s booked several headlining acts and artists from all over. Now, Meier anxiously awaits what this year’s festival could bring to town.

“I’m really psyched to be a part of this, and I’m excited to open the Hooker Grocery and Eatery,” he says. “The whole goal is to achieve critical mass downtown. It’s already there, but if I can do my small bit, I’ll feel good in knowing I’ve added back to this community.”

Another developer fell victim to Clarksdale’s charm after stumbling upon a key left behind by a guest to his Auberge NOLA hostel. The Shack Up Inn key led Robert Weinstein to google Clarksdale, Mississippi before booking his first stay.

“It all grew from that first visit,” Weinstein says. “This guest had an interest in Clarksdale, stayed at The Shack Up Inn and then stayed with me in New Orleans. And that’s what did it. I was immediately drawn in.”

As a tourist attraction, Auberge Clarksdale, housed in the former Madidi Restaurant building, is set to offer dormitory-style lodging to those who want to scratch off the typical hotel stay to make new friends with shared bedrooms, bathrooms and a large communal space to cook, watch television, strum guitars or simply, just hang out.

“It’s a really popular way to travel in other parts of the world,” Weinstein says. “And, it’s starting to catch on in the states.”

The main draw for Weinstein’s New Orleans guests is the unique, friendly atmosphere of a hostel.

“You go into a room and you have five other people—if you’re in a six-person room—saying, ‘Hi, nice to meet you,’ and you immediately have friends in some strange-to-you or new-to-you destination.”

“In Clarksdale, and even in the Delta as a whole, you have a ton of foreign people coming,” Weinstein says. “Any day of the week, you can stop in any restaurant and odds are that someone dining there is from out of the country. That’s unique.”

Most of the New Orleans’ guests Weinstein meets are traveling to and from bigger cities like Nashville or Boston, where hostels are common. Since Clarksdale’s en route between the larger cities, Weinstein figured a hostel just might make it in the small town. 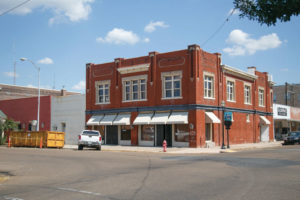 “Clarksdale’s huge,” he says. “It’s a mecca for music, and a mecca for blues history. The visitors are really into the home of the blues and  Robert Johnson.

Auberge NOLA hostel has won Hostelworld’s “Best Hostel in the United States” twice, and Clarksdale’s hostel will have a down-home, Bluesy vibe of its own to boast. Weinstein hopes Auberge Clarksdale will become a rest place between the party of Nashville and New Orleans.”

With Blues-themed interior designs, Weinstein also wants to include a taste of New Orleans and other locales, especially since the idea is to welcome big-city travelers who may not be aware that Clarksdale even exists.

Of the backpacking travelers he’s met, Weinstein says about five percent actually drive their cars to Auberge NOLA. In a city like New Orleans, other transportation options are more readily available.

Clarksdale has had the Greyhound bus station for a while, but about twenty minutes outside of the town in Marks, the recent addition of the Amtrak train stop seems to be picking up traction.

“I picked someone up there the other day, and about four other people got off the train coming to Clarksdale,” Weinstein says. “That was so good to see. A lot of those people will hopefully be interested in a hostel, obviously, but there’s all sorts of exciting things happening here.”

But Weinstein’s not the only New Orleanian to jump in on Clarksdale’s renaissance. 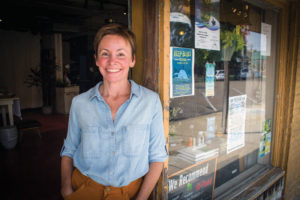 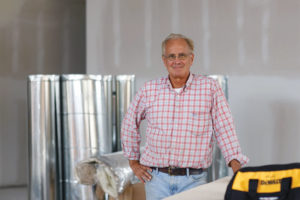 “This baby’s been three years in the making,” Williams says. For her, seeing countless working hours take shape downtown is a breath of fresh air.

The new, non-profit Coahoma Collective has kicked off two major projects in only its first year of operation.

Coahoma Collective organizers first purchased the feed and seed store formerly known as Miss Del’s General Store. They re-opened in April under  the name Collective Seed and Supply Co. with one main goal; to bring locally-owned businesses downtown and revive a struggling community.

As part of their mission, local artists own and operate the seed supply store downstairs. They work three to four days a week in return for a small stipend and having their cost of rent covered  for the upstairs lodging area.

The other component of the arts-driven cooperative is Travelers Hotel. Once open in January 2019, the artists will be responsible for operating and managing the hotel, where Williams says they’ll gain business and hospitality experience.

The twenty room hotel will be housed in a two-story building built in the early 1920s that has been vacant for nearly three decades. As for its restoration, Williams says they’re preserving as much charm as possible—paint, plaster and all.

“You’ll walk into a new, comfortable, modern building, but you’ll still very much feel like you’re in a special historical place in the Mississippi Delta,” she says. “It’s an amazing project. And we’re not only bringing this building back into commerce, but we’re providing a new venue for community meetings, art exhibitions, gatherings, and it’s not just for tourists.

“It’ll be a place where the community should very much feel at home.  It will be a  space to just hang out, learn, teach, and just be,” she adds. “It’s going to be really beautiful.

Exciting as it seems, the journey hasn’t been easy for Coahoma Collective’s executive director. Perhaps entertaining, but Williams has seen her share of challenges.

“We ordered all these beautiful plants and vegetables for our big spring debut, and the weather dropped to like thirty degrees,” Williams says. “So we’re freaking out, hauling all these plants to the shed; and then the sun would come out, so we’d bring them back out because people need to know we’re open.”

Day one was a wrap, and the team racked in a whopping $36 in sales.

“Ten of those dollars were the beers we bought ourselves at the end of the day,” Williams says.

“We were like, ‘What are we doing? We just made $36, it’s freezing outside, and we have a courtyard full of sensitive plants.’”

Though challenges often emerged, for Williams, the rewards have been flooding in just the same.

“To walk in that hotel and know how far it’s come, and to look around that hotel and know it’s providing jobs for local subcontractors and other folks, and to spend my days working with the artists of this store building this business, and to see the excitement and the enthusiasm of this warm, kooky, amazing community, it’s just the best,” Williams says. “It’s the best work I’ve ever done.”