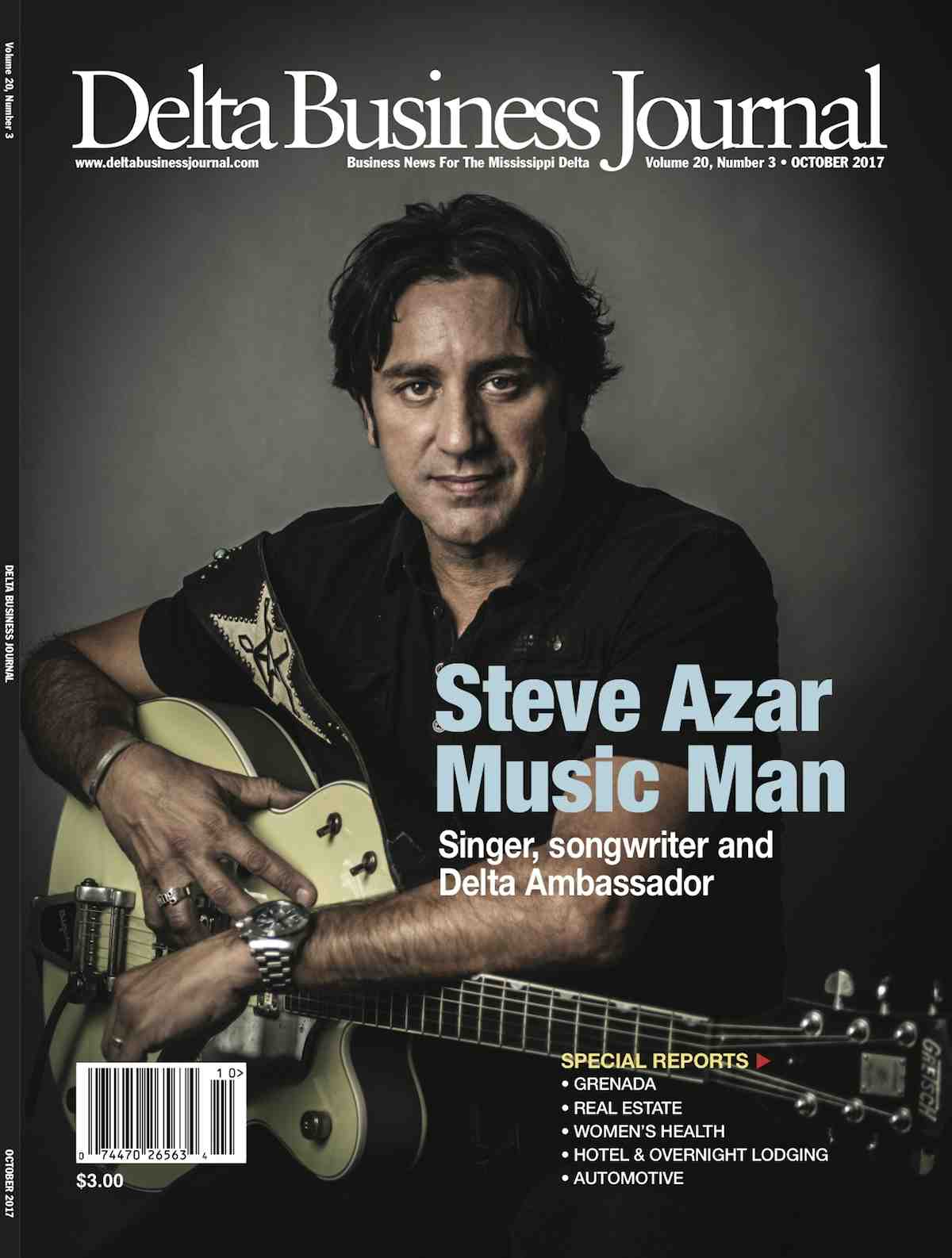 Steve Azar grew up the Mississippi Delta, and some of his earliest musical experiences were listening to musicians playing behind Azar’s dad’s liquor store in Greenville which, by the way, was the first legal liquor store in the state. Azar was about 10 at the time. Today Azar has had what he calls some “crazy success” that has led him to Nashville for 20 years and a career that has included a number of popular hits, touring with Bob Segar and having his songs recorded by famous musicians such as Reba McEntire.

His debut album in 2001 was Waiting on Joe. The Waiting on Joe music video, which includes wry, philosophical commentary by Morgan Freeman, went to #1 on Country Music Television.

One of his more popular music videos, I Don’t Have To Be Me (‘Til Monday), has had multiple millions of views, plays, and streams since its release in 2001 and has earned Azar the coveted 3 Million Air Awards from BMI for terrestrial radio performance. It reached #2 on the Billboard Charts, and is one of the top five most played songs since 2001 on country radio.

In 2011, Azar’s single Sunshine was a top 20 radio hit, and also another number one video for him. The album containing Sunshine, Slide On Over Here, was on Oprah’s Top Things to Buy at Christmas in 2011.

In August Steve Azar & The Kings Men released a new album called Down at the Liquor Store, which has received four out of five stars in every review, has been #14 on the iTunes album chart recently, and is in the top 20 for current record sales. It is a bit of a departure from previous work.

“This record is not traditional blues per se,” Azar said. “It is what I call Delta Soul, heavily influenced by the music all around me growing up. It is an honest take on that. It has to be that for it to have any shot at mass appeal and any shot at tugging someone’s emotions. You have to do that when you are making music. You just have to rile someone’s emotions.”

The album allows the listener to get to know Azar as a songwriter.

“There is no filter,” he said.

Azar he got his first guitar when he was only ten. The guitar was bigger than him.

“I was in a hurry to learn to play the guitar so I could write songs,” he said. “After college, I went to Nashville and was mentored by some of the greats. Somehow, they saw something in me that allowed me to take it and have hits of my own. If not for everyone along the way who mentored me, I wouldn’t have succeeded. Sometimes knowing what not to do is better than learning what to do. You lose a lot, and through that losing, you learn how to win.”

Azar is now heavily involved in mentoring others through his work at the Delta Music Institute at his alma mater, Delta State University. He has served as the artist in residence for the past six years and believes firmly in the curriculum. One thing he tries to impress on students is that while your heart will sink when you get rejected, it is important to keep trying.

“You can have 50 people tell you no, but as long as one says ‘yes,’ that is all you need,” Azar said. “Don’t be discouraged. A lot of people quit too soon. My first major label, Universal (at the time Mercury Records), said ‘no’ to me ten times before they finally signed me.”

Azar attended St. Joseph High School in Greenville where became a three-time state high school tennis doubles champion. Ranked as one of the top five musicians who play golf by Golf Digest Magazine, he has had seven holes in one. A frequent participant in charity golf tournaments across the country, he has donated more than $700,000 through the Steve Azar St. Cecilia Foundation, which hosts the Delta Soul Celebrity Golf & Charity Event. The charity is focused on providing arts and musical opportunities for Delta children. He’s also raised hundreds of thousands for charitable causes through the auctioning of songs he penned.

The fourth-generation Lebanese American Deltan, who moved back to Greenville with his wife and three children six years ago, has been named by Gov. Phil Bryant as the official Music and Cultural Ambassador of Mississippi. Telling the Mississippi Delta’s stories in songs is one of his fortes, as is promoting the unique culture, history and musical heritage that has made the Delta famous across the world.

“Gov. Bryant is really behind this creative economy,” said the co-founder of Greenville’s popular Mighty Mississippi Music Festival. “Tourism is one of the top employers in Mississippi. It’s important. We need to make sure we do things to attract people to visit and stay a while. To do that we have events such as the Bridging the Blues, and our award-winning Mighty Mississippi Music Festival held in September and October. The Delta is a place that people around the world are intrigued by and drawn to visit. Having people enjoy visiting Mississippi and leaving dollars is the game, and it’s a big game.”

Azar is currently working on distribution for a feature length documentary called Something in the Water, which is the making of the album Down at the Liquor Store. It talks about the rich history of Club Ebony in Indianola, and features The Kings Men. Azar and these legendary musicians came together to form Steve Azar & The Kings Men.

“The Delta, we know there is something in the water, something magic and mystical that has created art in iconic ways,” Azar said. “Instead of just a music video, we decided to do a documentary. The Kings Men is a band I put together with one of Elvis’ guys, five musicians who backed up B.B. King and one from Little Milton. We made a documentary that reflected our history and culture down here, a little bit of my story about growing up here and a few of the guys’ stories. It isn’t just our history, but getting to know the history of Club Ebony in Indianola where the documentary was filmed and the B.B. King legacy.”

Before he moved back home, Azar had one foot in Nashville and one in Mississippi.

“This is the first record where both feet are at home,” Azar said. “The songs just took a different turn. Writing Down at the Liquor Store just happened. I couldn’t have done it if I hadn’t come home.

His children were 10, 13 and 15 when the family moved back to Greenville. While they were born and spent their formative years in Nashville, he feels the Delta has positively fed into their entire beings.

“It has helped them find their direction in life,” Azar said. “Our oldest Strack, 21, directed the film Something in the Water and is a senior at Chapman University. Our middle son at Ole Miss, Adrian, 19, plans to be a doctor, and Cecilia is a 16-year-old junior at St. Joseph High School and is bound for a future in the culinary arts. My wife, Gwen, and I have been married 27 years, which is impressive in our business. She has been a great supporter.”

Azar grew up playing music in every major town in the Delta.

“My mom was from Clarksdale, and my dad was from Greenville,” he said. “I see all of us in the Delta as from one place. It would be great if we coordinated and worked and played together more than we do. I think that is doable and it is starting to happen. There are a lot of great mayors, great convention and visitor bureau heads and heads of economic development. I think there is some synergy there and people are willing to work together. We don’t need to take our eye off the ball because that is important.”

Azar, who still tours year around across the country and abroad, believes strongly in the importance of providing education in the arts, literature, and music for children.

“Not every kid can hit the 85 mile-per-hour curveball, but even that child that can still need art,” he said. “This is the best way for us right now to take back our communities and revitalize them. Our foundation wants to take a heavy role in injecting art into the soul and hearts of children, giving them opportunities. Poetry, writing, pottery, music, art, culinary art, arts of all kinds–give them an opportunity to have that in front of them.

“I think we will see some amazing things happen with them. When people stay here, live here and are successful, it helps the economy and the morale for all. The Delta and Mississippi in general, we have an incredible history. There is no place like it. For me, a singer songwriter, it shows itself through my songs. It’s a Mississippi thing.”

All Posts »
PrevPreviousRiver Commission Should Support Change in Federal Law to Reduce Long-Term Harm to Mississippi’s 16th Section Land
NextGrenada: Right on the Verge of GreatnessNext