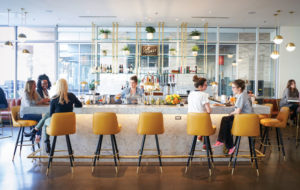 A21-acre site that was the former Mississippi School for the Blind in Jackson is now an amenity-rich community destination representing the best in mixed-use urban revitalization called The District at Eastover.

Breck Hines is co-developer of the area and also a member of The District Land Development Company, LLC, which he and two other partners, Ted Duckworth and the late Michael Barranco, incorporated in 2006.

“We bought the property in 2012,” Hines says, “and our late partner, Michael Barranco, who was a local architect, died in a car accident exactly one year before. Michael was instrumental in the original vision of The District in creating this area for Northeast Jackson, where people could work or live, but also simply gather together as a community and enjoy life and relationships. We opened the first office building in The District in 2016,” Hines says. “And then we delivered the rest of the project in 2017.”

Hines believes every city needs that special place where people can come together and have dinner outside, listen to a band play, or just simply meet up with friends and enjoy an evening together.

“In the old days it would have been Main Street in a smaller town,” Hines adds. “So today, here in Jackson, it’s The 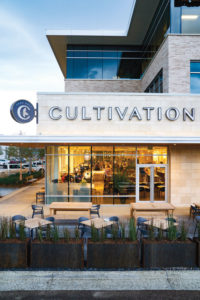 District. The three of us all lived in the neighborhoods that surround the site, and for years it was an old abandoned school, the result of the state combining the Schools for the Deaf and Blind years ago, just across the street from this property. And so they had left the north half of the property just as it was, they stopped investing in it because they were investing south of the road where the new campus was, and it was a bunch of old, vacant buildings. As they sat like that for years, we all would drive by it just wondering what could be done with the property, knowing there had to be a higher and better use for it.”

And there was. Hines feels that The District offers just what the city needs. It offers a new dynamic, vital and transformative city center, with a carefully curated collection of restaurants, boutique shopping, Class A office space, hotel, luxury loft living options…all in one pedestrian-friendly location.

“We had a 21-acre site in the middle of town that was doing nothing, but had so much potential,” he adds. “So we started pushing the Mississippi Legislature through the Public Property Committees to explore doing something with the property. A lot of ideas were talked about, and we started showing up at the meetings with some master plan ideas of our own of what could be done with the property that would benefit both the neighborhoods nearby, the city as a whole, and then the state from a tax revenue perspective. Several years of bouncing ideas back and forth and of trying to get the Legislature to put the property up for sale and dispose of it culminated in the State putting out a request for proposals and we ended up winning the submittal and we bought the property in 2012.” 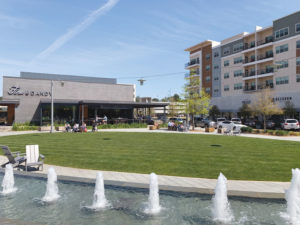 After purchasing the property in 2012, they spent the next couple of years working on construction drawings, demolishing the old buildings and installing all underground infrastructure and roadbeds to prepare it for what it is today.

“We started building vertical in 2015 and delivered the first building, which was a 125,000 sq. ft. office building for Baker Donelson Law Firm, Ross & Yerger Insurance, and Cosmich Simmons Law Firm in 2016.”

After that, The District took off with a Marriott Residence Inn Hotel, upscale loft apartments, retail stores, restaurants, and more office space, which was delivered in 2017. Also, the state’s first food hall, Cultivation Food Hall, is located in The District at Eastover. A first of its kind in Mississippi, the Cultivation Food hall showcases a carefully curated collection of boutique restaurant concepts, specialty coffees and classic, craft cocktails, and is a great place to stop for a quick meal or to meet a friend.

“We have a few lots left to develop, and we’re working on another office building concept as we speak,” Hines says.

With the thoughtful integration of commercial and residential offerings, The District has great shopping, lots of green space and a pleasant and communal atmosphere.

“It was Michael’s original vision and Ted and I have just carried that forward in execution. Michael came up with the 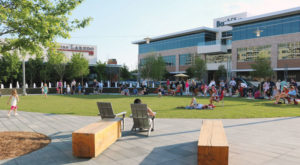 name ‘The District at Eastover,’ as he was a student of European architecture, and a ‘district’ hearkens back to an European plaza or piazza. We just wanted everyone to know that it’s a district where people can come to do their business, meet a friend for coffee, or shop, or visit the Farmer’s Market, or stay overnight in an upscale hotel. And this was Michael’s vision for Northeast Jackson and that’s how it became The District at Eastover.”

Kristin Allen handles marketing for The District and says that the cosmopolitan mix of business and pleasure is just what the Metro Jackson area needed.

“Between the hotel and the apartment lofts, the retail shopping and magnificent restaurants, The District has just about everything you need in one beautiful area. The high-end restaurants are great, but we also have quick places for lunch, and in the center of the development is a fabulous green space where community and other events are held. It just a wonderful place for people to gather. If you haven’t visited The District while in Jackson, it’s definitely a must-see.”