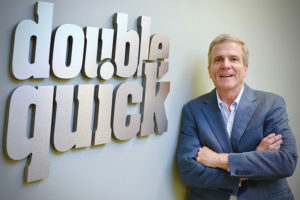 When you meet with Tom Gresham of Indianola, one thing that becomes immediately clear is how much he loves the Mississippi Delta. The president of the Double Quick, Inc., has overseen the convenience store chain grow from modest beginnings in 1984 to now having forty-nine locations employing about 1,200 people. He is also secretary\treasurer of Gresham Petroleum and treasurer of Delta Terminal Inc.

Now, Gresham is taking over as president of Delta Council, the region’s umbrella economic development organization.

“My grandfather, Walton Gresham Sr., my father, Bill Gresham, and my uncle, John McPherson, instilled in us at an

early age the concept of giving back to our community,” Gresham says. “They took their civic responsibilities to the community, the Delta and the State of Mississippi seriously. It’s something that all of us at Double Quick have taken to heart. We operate in many small towns all over the Mississippi Delta and Eastern Arkansas. Our stores and our team members are from these communities. It’s our duty and responsibility to give back to these areas.”

The Gresham family is very well regarded in the Delta, says Bryan Jones, a retired banker and farmer from Yazoo City.

“Tom is just a good citizen, and he gets that naturally from his mother and dad,” Jones says. “They are very charitable people and they employ a lot of people in the Delta, which is very, very helpful. They do a good job. They are a great Delta family.”

Bowen Flowers, an ag producer in Clarksdale, says Gresham is a true leader.

“When I go into one of his Double Quick stores, I see how well the staff treats people,” Flowers says. “I’m sure that comes from Tom’s leadership. He has a good working relationship with his employees and the people of the Delta community. He has worked tirelessly to lead the Delta Council’s Delta Strong workforce training initiative for the past several years. He has done a great job trying to recruit businesses into the Delta. He has been trying to make it better for the whole Delta.”

“If you start talking to him about the Delta, you will see his passion for his home come through immediately,” says Scott Waller, president and CEO, MEC.

“He really cares about doing things to make the Delta and Mississippi better,” Waller says. “We are very fortunate to have someone like Tom take on these leadership roles. As past chairman of MEC, he worked hard to make our organization better. He is a leader not only of the community, but also a leader within his industry on a national level. It is amazing when you sit down to talk to Tom how knowledgeable he is about the convenience store industry.”

Gresham’s father played a large role in his life.

“He and my uncle, gave my brother, Walton, my cousins, Bill McPherson and Chuck Webb and me the opportunity to start Double Quick in 1984,” Gresham says. “They let us ‘run with it’, but they also gave us great advice over the years. Growing up in a small town, my father had so many friends who took an interest in me including James Robertson, Henry Paris, Jimmy Lear, Pap Allen, Leslie Fletcher, and many others.  These men always took the time to get to know me and other young men growing up in Indianola. They took a personal interest in the people in our community.”

He grew up attending St. Stephen’s Episcopal Church, where he recalls having wonderful Sunday School teachers.

“One of my mother’s closest friends, Lucy Fisher, taught my age group for many years,” Gresham says. “She believed in doing for those less fortunate. In junior high, she started having our class adopt a needy family each Christmas and take gifts to them. Lucy instilled in us Jesus’ summing up of the commandments, ‘Love the Lord thy God with all your heart, soul and mind, and love your neighbor as yourself.’  These experiences helped all of us understand God’s call to help others.”

Gresham, the youngest of four children, was born and reared in the Delta and graduated from Indianola Academy. He graduated from Southern Methodist University (SMU) in Dallas, Texas, with a BBA and BFA in Journalism. It was there he met and married the former Louise Houseman.

After graduating from SMU in May of 1980, he worked in Frito-Lay’s corporate office in Dallas.

“It was a great place to work–a fast moving company,” he says. “Every new employee hired at Frito-Lay had to ride a route sales truck for one to two days. They wanted to make sure everyone understood that the way the company made money was delivering their products to retail stores for the consumer to purchase. That was a great lesson for me, and something that we have used in our businesses.”

In the late 1970s and early 1980s, many fuel marketers started growing their retail businesses. Tom and Louise had

recently married, and left Dallas to return to Indianola where, in March of 1984, Bill, Chuck, Walton and Tom got in the retail business by purchasing sixteen Mr. Quik Convenience stores from SuperValu. They hired a small Jackson firm to help them come up with the Double Quick name and image.

“He started delivering fuel to farmers,” Gresham says. “Dad returned in 1949 and expanded into propane. My uncle joined in the early 1960s, and my brother in the early 1970s.”

In a profile published in Independent Gas Marketing in 2015, the year Gresham was president of SIGMA, Gresham says 1984 was an exciting time to get into retail gasoline marketing.

“Looking back, the decision to become a retail fuel marketer is the best career decision we could have made,” Gresham was quoted as saying in the article. “Because the industry is so fast-paced and always changing, every day brings new challenges. I’ve seen it from the first days when fuel and food were first coming together, right up to today. And what I’ve enjoyed most of all is watching our people at Double Quick grow and build careers of their own.”

One trend that Double Quick has capitalized on is to have hot food available in the convenience stores. They now operate twelve Church’s Chicken restaurants, two Krystal Hamburger restaurants and their own brand, Hot n’ Crispy Chicken, in their Double Quick stores in Northwest Mississippi and Eastern Arkansas.

Double Quick is always looking for opportunities to grow, add a new store or remodel a store. Some of the towns they serve don’t have a grocery store, making it important to provide the food for people who might not have the time or the ability to travel to a bigger town for grocery shopping.

“One of our biggest challenges is to know what the consumer wants and expects from us,” he says. “How do we meet the needs of the community? We are constantly trying to deliver what our customers want.”

Gresham attributes a big part of their success to something he learned from Sam Walton’s book:  Always hire people smarter than you.

“I think Bill McPherson and I have just been blessed with really good, dedicated team members,” he says. “Our 1,200 team members are considered part of the family. It is part of our culture.”

The Greshams have long been involved with Delta Council.

“When I look back at Delta Council’s history, one thing I’m very cognizant of is the need to maintain and enhance Delta Council’s effectiveness at the state and federal level,” Gresham says. “It is very important we meet the challenges and opportunities in the agriculture and economic development sectors.”

One of his major goals as chairman of Delta Council is to look at creative ways to combat the loss of population in the Delta (See related article, Delta tackles challenges of stopping population loss on page eighteen).

Another goal will be lobbying to overturn the EPA veto of the Yazoo Pumps. This year more than 500,000 acres of land in the South Delta have been underwater for months causing great hardship to farmers and residents.

“It is crucial to those citizens of the South Delta to get the pumps to help protect their homes and livelihoods,” Gresham says. “We have to do what we can to help.”

“My wife and I have three children,” he says. “Our daughter, Katy, and husband, Michael Blonkvist, live in Midland, Texas, with their twins, Annie and Tripp. Our son, Thomas, and his wife, Anna, live in Dallas with their two children, Caroline and George. Our son, Michael, also lives in Dallas.”

“I have to exercise every day,” Gresham says. “You feel better when you get outside. I still water and snow ski. Louise and I love traveling, hiking and biking. I am an occasional deer hunter. I enjoy being out in the woods—quiet times.”