The Village at Madison 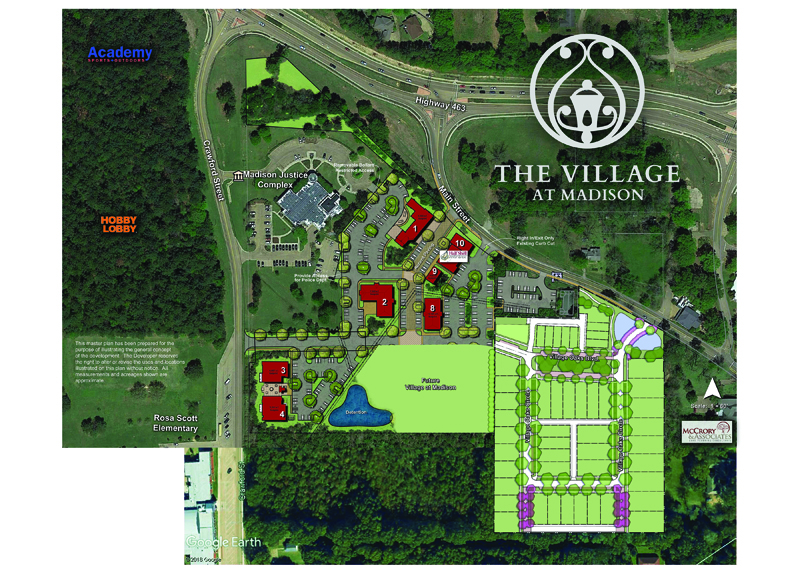 The Village At Madison is a new $50 million, eighteen-acre development in Madison County containing forty-six residential lots and 88-acres of available commercial and office space. Half Shell Oyster House restaurant became the first establishment to open its doors at The Village At Madison and negotiations are ongoing to bring in more restaurants as well as a few, smaller boutique retail establishments, such as possibly a day spa or florist, and professional business firms and companies.

“As far as the organizational structure behind The Village there are three equal partners,” says Mark Castleberry, CEO of Castle Properties. “Myself, Lee Stafford of West Point, and Delta native, Dr. Michael Manning, who owns the Mississippi Vein Institute and The Men’s Clinic in Madison.

“We placed much of the property under contract in mid-2018 and closed on the purchase of the assembled 18-acre site in December of that year,” says Castleberry. “We began construction of the site work—streets, parking lots, utilities—in September of last year. Construction of the Half Shell Oyster House began in December of 2018 and they officially opened on September thirtieth of this year,” he adds.

“The contractor for the site work and Half Shell Oyster House is Codaray Construction based in Ridgeland with the civil engineer on the project being McMaster Engineering in Madison. Our residential planner and architect is Michael Thompson of Thompson Placemaking based in Brandon,” says Castleberry.

The location of The Village At Madison is “literally on the corner of Main and Main,” says Castleberry, “or Highway 53 and old Main Street The Madison Police Department is one of our neighbors as isThe City of Madison Welcome Center. We own the land where both are housed as well as the surrounding land,” he adds. “The City of Madison was a pleasure to work with, also: very clear in their requirements, never changing things after the fact and were very consistent with us throughout the whole process. One important addition we agreed to do was to build a beautiful, $200,000 arch that we’re constructing for the City that will stretch over Main St. It’s a beautiful addition, and kind of reminds me of the Eiffel Tower because of its metal work and sixteen-foot all masonry base. It’s very large and will span three lanes of traffic in the area. It should be going up in less than sixty days,” says Castleberry.

“The homes in the residential section will begin construction this month, November, and the style of the neighborhood will be that of the New Orleans Garden District,” says Castleberry. “There will be a variety of architecture, as in the Garden District, but they will all work together esthetically. Our architect, Michael Thompson, did an excellent job in planning. We’ve got thrity-one of the lots already under contract either with a builder or an owner and close to twenty of those will begin construction this year,” adds Castleberry.

The pandemic never disrupted work on The Village at Madison, says Castleberry, with just a few minor exceptions. “Getting enough laborers and full crews to work on the construction which caused a slight delay and many of the restaurants we were in talks with put things on hold—at first. But over the last thirty to sixty days that’s all changed and the hesitancy to build or expand seems to not be an issue anymore. Of course, with interest rates as low as they’ve been, our residential area didn’t suffer at all during the pandemic; on the contrary, it exceeded expectations.

“We believe The Village At Madison to be a very special place,” summarizes Castleberry.