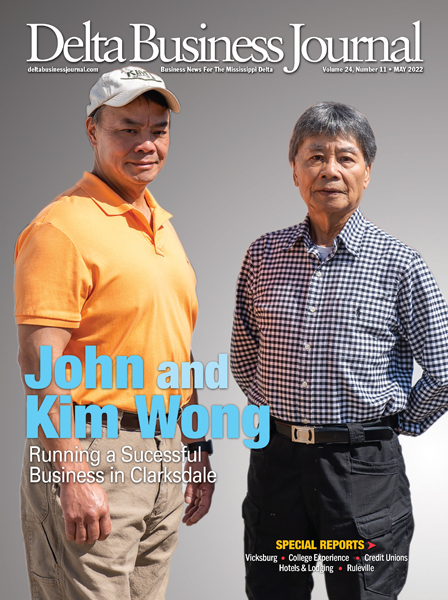 Kim Wong, born in China in 1938, is an American immigrant success story. Not only did he establish Kim’s Food Processing Plant in Clarksdale that now sells pork and chicken skins in fifteen states, he has also been an integral part of the Delta town he adopted, including having many friends and fans from teaching martial arts for decades.

Kim teaches Tae Kwon do, which he learned while serving in the U.S. Army in Korea, combined with Tai Chi and a little yoga and Pilates. He has offered those classes for more than thirty years, including at the Clarksdale Baptist Church Fellowship Hall for many years.

“Number one, I enjoy my martial arts,” says Kim. “Number two, I want to introduce a form of exercise for my church. I encourage people to come and exercise for their own health. I’m a small person, so I feel I need self-defense. That is why I trained myself in martial arts when I was in Korea. I only weigh 135 pounds, so I need all the muscle I can get. Martial arts are good exercise that helps you with self-confidence, independence, concentration, and physical therapy. We all need exercise.”

Kim has no set fee for his classes. People give what they can, usually just a few dollars. What he collects is donated to the church. His students include children of all ages, teachers, lawyers, retirees and others.

Kim immigrated to the U.S. in 1949. After going to school in Connecticut for a couple of years, he became the first Chinese student in a white school at Friars Point in the Delta.

“I was well accepted at school,” he says. “I made many friends. I worked at my father’s grocery store from the time I was about sixteen. After high school, I joined the U.S. Army and took special training at Fort Chaffee here in Arkansas where I got training in bookkeeping. I was stationed in Japan for about eight months. In 1958, I was sent to Korea. It was there I studied Tae Kwon do and earned my Black Belt.”

When he left the Army in 1959, he returned to Friars Point and his father, Chew Duck Lee, turned the grocery store over to him. His father said, “You don’t need to go to college to run a grocery store. I’ll teach you.”

Jo Bing Company was one of just two grocery stores in the town. But, like many small Delta towns, Friars Point began to lose population and more people tended to travel to larger towns to shop. With business declining, in 1960 Kim moved to Clarksdale, about thirteen miles away, and purchased a larger grocery store than the one in Friars Point. He added a laundromat and started teaching martial arts.

Then he decided to get into the restaurant business, having learned about that while working for his brother-in-law in Connecticut. Between 1960 and 1973, he ran the grocery store and the only Chinese restaurant in the town or county.

He got into the pig skins, also known as pork rinds or pork cracklings, as an adjunct to the restaurant. Pig skins are made from a bi-product of pork processing, but they threw it away at their restaurant. He discovered it had a very good flavor. So, he gathered together some favorite seasonings, fried up a batch, and passed it out for customers to taste.

“They all loved it,” says Kim. “They asked me why I didn’t package and sell it. I called the USDA, and they sent an inspector to my office in Clarksdale and showed me how to do it. That’s how I started my pork cracklings. I discovered it accidentally from a product that was being thrown away.”

Business was very, very good. He couldn’t produce enough for his customers even after expanding to two twelve-hour shifts per day.

Kim thinks that it is important to enjoy pork or chicken cracklings, but in moderation. “If you eat it, it will be a light of your life,” Kim said in a video, Kim’s Way, made by Barefoot Workshops.

Kim says nearly all the fat is rendered out. All you eat is a crunchy product with very little fat. “You have less calories in my cracklings than you do with a cupcake,” he says.

The product caught on quickly, and he was unable to meet the demand.

“I was the only one who had these pork cracklings at that time,” says Kim. “The people all loved it. So, I increased the size of my building. I rebuilt and added a cooking facility, and more employees. In 1985 we closed down the restaurant to focus on the cracklings.”

People started saying they liked the pork cracklings, but couldn’t eat them because they had high blood pressure. That is when he started the chicken skins.

In 1997, he turned the business over to his son, John, who has a college degree in business from Delta State University.

“After John took over, he increased the business tremendously,” says Kim. “Right now, I have no idea how many states he has. But, he is all over.”

John says the business was going strong when he took the helm.

“We hardly ever advertise,” says John. “It was usually by word of mouth. Someone would eat it and say, ‘Man, it is so good.’ Pork cracklings was number one, but some people didn’t eat pork because of religious beliefs. My father inventing the chicken cracklings was probably the big move for our business. Now it is our number one product by far over pork cracklings. We got lucky and went to a some vending shows. A couple of vendors distributed to big cities like Atlanta and Memphis. That is really how it started. It grew like a wildfire. We cover fifteen states right now. The products sell themselves. We don’t have to do a lot of advertising.”

The business had been doing well for about fifteen years when they were hit by a devastating fire.

“One of our stoves caught on fire and, because of where it was located, the fire department had to spray everything, which damaged the packing equipment,” says John. “A friend in the construction business was there the next day. The whole place had to be demolished and rebuilt. It was insured, but insurance doesn’t cover everything. Thank goodness we had some money put back.  When we started back up, there was a great desire for the product because it hadn’t been there for so long.”

John says what he enjoys most about the work is pride in carrying on successfully with the family business. But, it is a lot of work. Dealing with government food regulations and people is challenging. The biggest challenge is to find workers—especially since Covid hit.

“We could put out more product, but we can’t get enough supplies and workers,” says John. “Five years ago, we were doing really well. We were even thinking of growing our plant. But, in a small town like Clarksdale, it is hard to get people to stick with you because it is not an easy job.”

Another integral part of the business is John’s wife, Holly.

“Holly does everything from order taking to shipment of the orders to accounting,” says John. “I do the grunt work. I sweep the floors, and work on programming of packing machines. Holly’s dad, mom and sister also work for the company. Without them, we would have not survived the Covid hit. They are the backbone of the business.”

Kim still comes in once a week or so to keep an eye on things, and used to take over for John when he was coaching his two boys playing ball. Their son Landon is now twenty, and Jordan is seventeen.

“The main things in life are God and Family,” says John. “This is why we work.”

They also take time for recreation.

Kim says he is never bored because of being retired.

“I always have something to do,” he says. “I take my time. I walk around my garden, and spend time doing watercolor painting. That’s enough for anybody.