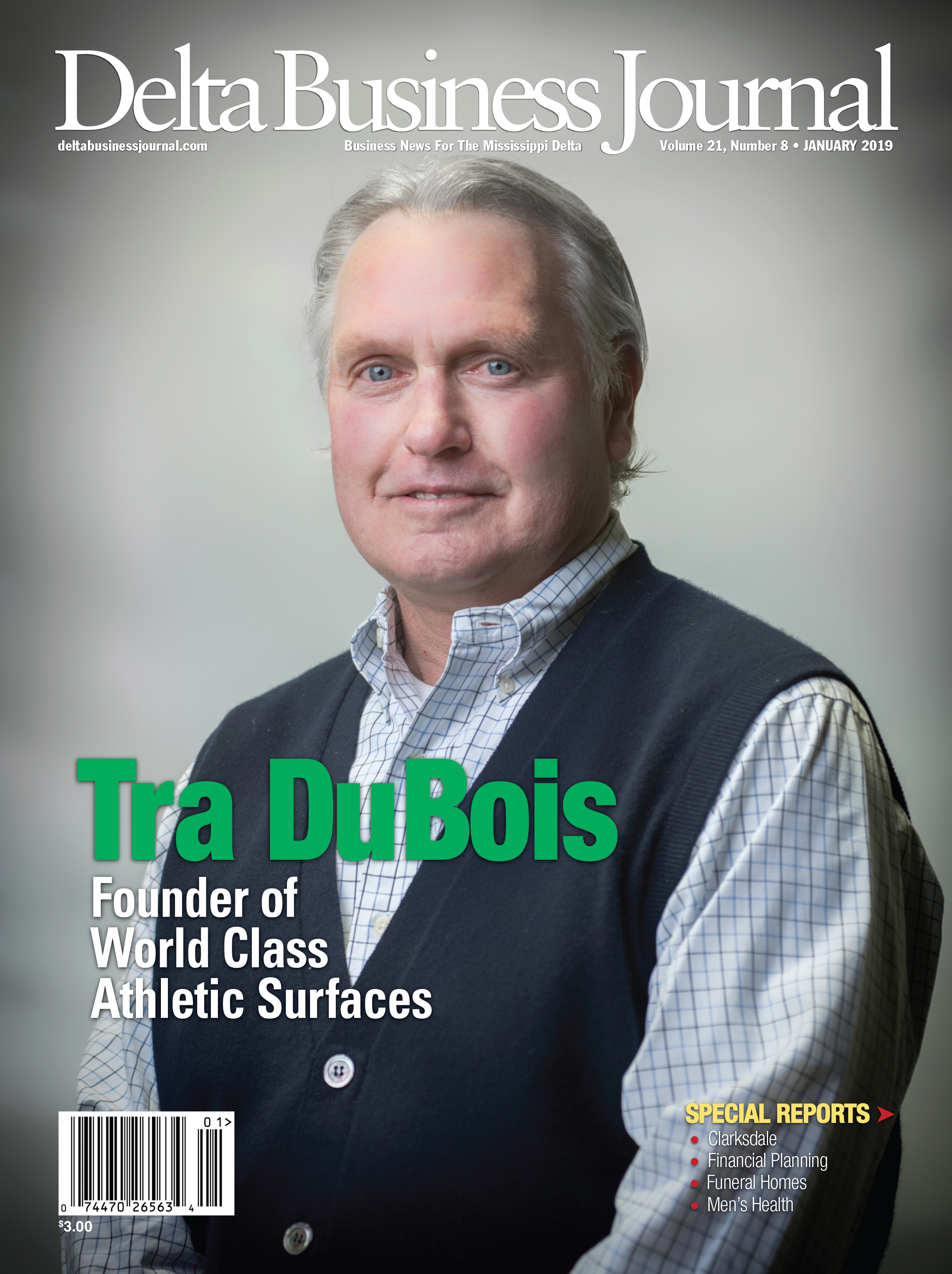 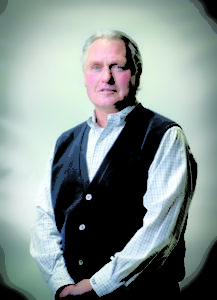 If you happen to be among the estimated 172 million people who viewed the Super Bowl in 2018, then you saw playing field graphics that were created by a small, family-owned company in Leland named World Class Athletic Surfaces. That same company makes the paint and stencils for many other major sporting events including the Major League Baseball All-Star Game, the World Series, and for numerous top college programs.

The Super Bowl is one of the largest productions throughout all sports, says World Class owner Tra DuBois.

“It is truly a global event,” DuBois said. “World Class products serve as the backdrop for memories that will last a lifetime. Each year, preparation usually starts about five weeks before kickoff.  The World Class stencil team will receive the artwork for the four final teams which will then be loaded into the computer system. Then we will wait for the results of the AFC and NFC Championship games. First thing Monday morning the winning teams’ logos and end zone stencils will be produced. The stencils range in size from 29’ to 120’ wide and 22’ high.  At the end of the day, the endzone, midfield, and other on-field stencils, along with all the field paint for the game, will be shipped to the Super Bowl site.”

The speed with which the stencils are made and shipped are just two advantages that make World Class stand out from competitors. Not only do the graphics looks sharp and beautiful, but the paint is non-toxic to players, the grass, and the environment.

Aside from having the best athletic field marking products on the market, their customer service is second to none, said Brandon Hardin, Sports Turf Superintendent, Mississippi State University. 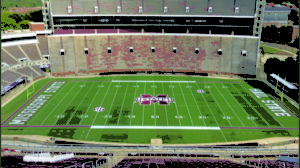 “Tra and everyone at World Class are just that–World Class,” Hardin said. “I’ve had the pleasure of working with all of them for years. They always go above and beyond to make sure we are taken care of. With me growing up in Belzoni, not far from Leland, I take great pride in knowing that Tra has grown his small-town Mississippi company into a nationally-known company that serves everyone from high schools to the pros all across our great country.”

Philadelphia Eagles Director of Grounds Tony Leonard said from start to finish, the team at World Class does an excellent job working to get the right stencil created for their customers.

“Not only do we host Philadelphia Eagles home games, but we will host all Temple University’s home games, the Army/Navy 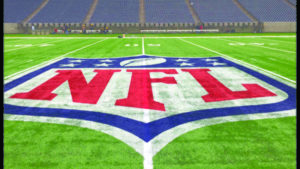 game, and the NCAA Lacrosse Championships over the next few years,” Leonard said. “Our needs for stencils and graphics are quite extensive. World Class assists us in presenting field layouts with all the correct markings to present to our customers so they can visualize exactly what they are purchasing. From there, World Class produces the computer-generated stencil and has it in our hands in a timely manner.”

Leonard said the quality of products and stencils World Class supplies is top in their industry.

“They have been doing it for a long time and they know what the end user needs,” Leonard said. “No job is too small or too big and that is important to all of us in the sports field industry. They take the same care of the high school down the street as they would for any professional team.”

When he was young, DuBois wanted to be a tennis pro.

“I grew up in Yazoo City,” DuBois said. “It was a great place to grow up. I played baseball and football in high school and tennis at Belhaven University. After college, I met some guys building tennis courts and I got into sports construction: tennis courts, running tracks, football fields and baseball fields. I spent seven or eight years in Texas in sports construction. It was great experience. All my buddies were pros at tennis clubs, and I had an in to get a lot of work.”

One thing he noticed during those years is that none of the sports surfaces were made in the South. And he knew at some point in time he wanted to move back to Mississippi.

“I needed a gravel road I could take to go fishing,” DuBois said. “I moved back to Mississippi and kept getting calls from old associates while I was trying to figure out how to make coatings for tennis courts and anything else. I started doing some testing, looking at the best products, and that is how World Class got started in 1987.”

DuBois decided if he was going to make athletic surfaces, he wanted to have a company superior to any others. 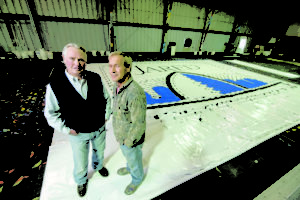 “I didn’t care about the price, I wanted it to be the best quality you could make with the products available then,” DuBois said. “Everything I had tested was using products made from latex and acrylics that came into use in the 1960s. Since I cared about wildlife and fish so much, I wanted the paint to be as clean as possible even if it meant using food products in my paints. In 1987, I didn’t know that being non-toxic was going to become increasingly important.”

When he investigated the paints being used then for football fields, he found that mostly cheaper paints were being used.  “When it was applied to grass, it often killed the grass,” DuBois said. “That was a problem. I wanted something that wouldn’t harm the turf. I was lucky to have help from the Delta Research and Extension Center in Stoneville here when I started. I talked to a researcher in Stoneville about the raw materials that normally go into paints. He recommended ingredients that help the grass grow instead of hurting it.”

They put together the right products, did a lot of testing, and let Mississippi State University try it first. MSU called DuBois back in a week and said, “Can you write the specs for this? We want your product. No one else is making a field paint as good as this!”

In addition to being non-toxic, DuBois wanted the colors to remain bright. Early on in developing white paints for football fields, he would notice that the white paint looked dull. The chemists he was working with said he couldn’t put any more white pigment in the paint.

“Do you remember the Cheer commercial on TV where they talk about that blue white? I got several samples of different blues sent to me, and started tinkering with the product,” DuBois said. “It was still sparkling bright. It didn’t turn yellow or go off color. I said, ‘This is it’. Little things like that made the difference with our product.”

After others saw how great MSU’s fields looked, World Class got called by the University of Alabama and it grew throughout the Southeastern Conference (SEC). When they started doing the same thing for the NFL, their customers started asking if they would provide the stencils for the paintings, too.

When they started, World Class was doing stencils with an overhead projector on a 15- to 25-foot wall, putting plastic up and tracing. It took several days to complete an end zone. They did it that way for a couple of years when a chance conversation on an airplane gave DuBois the clue to improved stencil making. His seatmate was in clothes manufacturing. They used a cutting table system for their patterns. That gave him the idea to look at cutting tables for stencils.

“When I got back home, I started researching cutting table machines to computerize stencil cutting,” DuBois said. “It was so simple and so easy. The stencil machines reduced prep time from a few days to 1.5 to two hours.”  The stencil table and process have since then been patented.

“The stencil cutting system cost a good bit, but it saves substantially on labor and time,” DuBois said. “We thought we were green, but now we are really green. The paint we use is the cleanest on the market. With the Tote Mixing System we developed, the paint containers are reusable. We continue to focus innovation on eco-friendly, low-VOC paints that are ready for close contact with players and the Earth—keeping our world beautiful for a lifetime.” 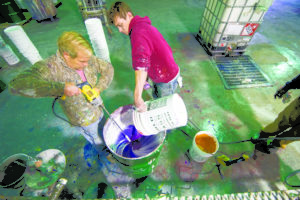 DuBois credits his customers with helping perfect the process and product. “If you are giving them a great product, the customers teach you where to go,” he said.

World Class has been in business now for thirty years. Everything is still manufactured in Leland. The company employs 15 people, including a number of family members. His wife, Margaret, is business manager. Her son, Scott Cox, heads the stencil department, and DuBois’ son, John, works in the stencil department. DuBois’ brother-in-law, Greg Narmour, is vice president.

“Greg is the main man now,” DuBois said. “I’ve slowed down in recent years, and he has taken my place.”

Narmour, part of the company for twenty-threeyears, said it is “kind of crazy” to think that a company based in a Mississippi Delta town of only 4,500 people has provided products for the Super Bowl for the last 18 years.

Narmour said having the best products in the industry is important, but it also comes down to taking care of customers.

“If someone calls us and needs something tomorrow and the trucks have already gone, we will drive it to them,” Narmour said. “We were doing a very large stencil one year for an A&T commercial, something happened, and it didn’t get delivered. So, we put in on a private plane. We just wanted to make sure they got it. That is the kind thing we do. We don’t cut corners.”

There is some kind of sporting event nearly any time of the year that World Class is involved with. In the fall after they finish the World Series playoffs field art, they start getting ready for bowl games and national football championships. Then there is a big national trade show with the Sports Turf Managers Association in January, following by baseball, soccer and spring sports.

“We do everything for the NFL, Major League Baseball, almost every major college with the best-looking fields, and of course high schools,” DuBois said. “We just keep letting people know who we are and spread the word.”

DuBois is modest about the success of the company.

“I got lucky,” he said. “I was going to do this as a sideline. Tennis was my baby. Then the football stuff just took off.”

He also credits being involved early on with helping organize the Sports Turf Managers Association. When he started, there were thirty members. Now the STMA has grown to almost 3,000 members coast-to-coast. There are about 190 exhibitors are their conferences.

“Being involved in the STMA has been very valuable,” DuBois said. “We were lucky enough to get in on the ground floor. It has been a great experience.”

When DuBois isn’t working, he enjoys going to his farm in the Delta, and hanging out in the woods. In addition to sports, he has a great love of music. When he travels, his friends know to be on the outlook for a good music venue.