Andy Taggart decided that the time was right. It might have seemed like a last minute decision, coming as it did on the qualifying deadline date of March 1. But Taggart had actually been pondering the run for Mississippi Attorney General for some time. 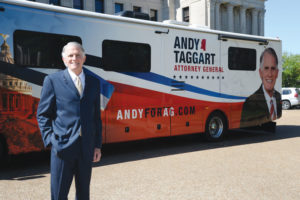 “I had almost run four years ago for AG,” Taggart says, “because it’s truly the only statewide office I have any interest in at this point in my career. And, after long consideration with my wife, Karen, I knew that the time was now and that I was ready to enter the race with a newfound passion and sense of purpose.”

The most prominent part of that purpose—as well as the reason Taggart waited as long as he did to announce his run—was the recovery and reflection he and his family were still going through after the tragic death of Taggart’s son in 2012.

“Losing a child under any circumstance is a terrible, traumatic experience for a parent,” Taggart says. “But our son’s taking his own life due to the scourge that has affected, and still affects, so many other people gave a greater sense of purpose to me to run for the state’s Attorney General’s office.”

That scourge is substance abuse and drug addiction—and Taggart has made combatting this ever-growing problem one of the priorities of his current campaign.

“Of course, illicit drug abuse is itself an illegal activity,” Taggart observes, “but the worst of it is that it also tears apart communities families and, I believe, is the biggest earthly challenge facing Mississippi today: combatting the flow of illegal and dangerous drugs into our state and the handling of this epidemic—which is most certainly what the problem is now.

“I just have not seen our current Attorney General use his office to fight the drug issue as I would,” Taggart says.. “In my opinion, not enough existing resources have been allocated or reconfigured to help our law enforcement officers, the court system and counselors to hit the predators as hard as they need to be hit.”

One of the other major points of distinction for Taggart is how Mississippi has and should handle public corruption.

“Too often the state has been passive in investigating public corruption cases, allowing the Feds to take the lead and then coming in after the initial work was done,” Taggart claims. “The Chris Epps fiasco was primarily a Federal-led bust, as just one example. It’s been years since Mississippi has made any substantial bust of public corruption on its own and I believe we need to prosecute those cases on our own. Tips come in regularly and must be pursued by local and state prosecutors.” 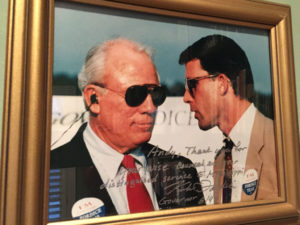 As a prominent Republican conservative, Taggart has apparently surprised many Mississippi pundits and editorialists by supporting the push for a new state flag, a stance he has lately received a good deal of press about.

“I don’t believe the current state flag represents an accurate snapshot of Mississippi,” Taggart argues. “It’s time we look forward instead of hanging on to the past.”

Bringing an illustrious and well-documented background of experience to his current campaign, Taggart is hard-pressed when asked what he considers the highlight of his long career.

“Well,” he reflects with a chuckle, “I think I can truthfully say I’ve done more than most when it comes to political, legal and government experience. I was honored to serve as the late Governor Kirk Fordice’s Chief of Staff and Counsel and to go on to work with Governors Barbour and Bryant (when the latter was State Auditor) on a number of high profile issues such as the Voter ID litigation as well as the WorldCom case and the review of Department of Corrections contracts and procurement in the wake of the Epps scandal. Plus, my years in private law practice have certainly been both prolific and rewarding to me—In the past twenty-four months alone, I have been privileged to argue before the Mississippi Supreme Court, the state Court of Appeals and, in June, again, before our Supreme Court” Taggart adds.

Beyond his legal work, Taggart has also co-authored two popular books on Mississippi politics with friend and (liberal) political commentator, Jere Nash, as well as a recurring column for an online travel magazine. 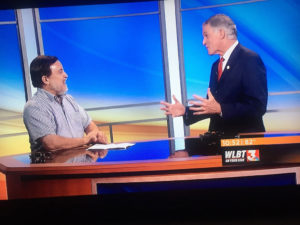 Regarding the Mississippi Delta, a region Taggart says he holds in high regard and with great fondness, as a candidate he has already committed himself to dealing with the flooding problems so prevalent here, especially those the South Delta confronts on an all-too-regular basis.

“The Yazoo Backwater Pumps must be built,” Taggart states emphatically. “It’s unconscionable that they have not yet been put in place. It’s a crisis that the federal government has dropped the ball on for years while the people of the Lower Delta, in particular, have to live in a constant state of fear and anxiety. With them, it’s not ‘if’ it will flood again; unfortunately it’s ‘when’ it will flood again and for how long—and that is unacceptable.”

So far in the campaign, Taggart says he has been overwhelmed by the support and well-wishes of so many voters throughout the state.

“We have far exceeded our fundraising goals,” he says, as one example, “and the moral support Karen and I have received has truly been humbling.”