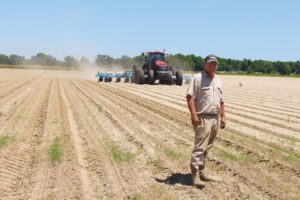 Cultivation of industrial hemp was legalized under federal law in December 2018, and while the plant was technically legalized, the U.S. Department of Agriculture has not yet approved regulations for its production. Hemp is derived from a plant similar to marijuana, yet only contains a small amount of THC, which is the active ingredient in marijuana. The House bill legalizing industrial hemp would require any plant grown not to exceed 0.3 percent THC.

Brent Brasher is president and CEO of Kengro Corporation in Charleston. Brasher has been growing kenaf, a once relatively unheard of fiber for Mississippi Delta farmers, since the 1980s. With his wife, Gabriela, they have been growing and processing kenaf into very successful oil absorbent products.

Today, along with kenaf and other crops, Kengro processes industrial hemp. Brasher got into the industrial hemp business through his overseas partnerships.

“My wife and I farm in Tallahatchie and Leflore Counties,” Brasher says. “We grow soybeans, corn, wheat, rice, and kenaf. And kenaf is a fiber crop, in the same family as cotton. With the industrial hemp, I basically got into importing it because I have partners in Europe and Australia that were importing our product, which was just made from kenaf. They were growing hemp in Australia and The Netherlands, so we decided to bring in the hemp hurd, which is the inside part of the hemp plant, for animal bedding.”

Brasher adds that they began by importing the hemp hurd to their facility in Charleston, where they processed it to make the animal bedding. Today they also process the entire stalk, not just the hurd.

“It comes to us in whole-stalk form and we separate it, grind it, size it, clean it, bale it, and bag it.”

Brasher says there are many types of hemp grown, but industrial hemp is grown more like the regular crops he already cultivates. 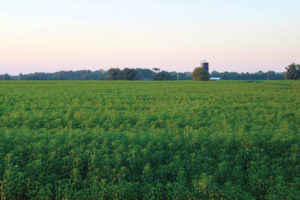 “There are many types of hemp, but the industrial hemp has nothing to do with CBD or THC,” he says. “It’s a vegetative plant that grows very tall. You plant it early and harvest the entire stalk, chopping it up with a forage chopper. With the other types of hemp, they’re grown more like the vegetable production business, with a lot of hand labor involved. With the CBD, the seeds are planted or cloned in a greenhouse where they are then transplanted in the fields. But industrial hemp is for the most part planted like every other traditional crop we grow.”

“Basically our separation facility divides the inner part of the plant from the outer part,” he continues. “It’s the same as we do with kenaf. After we process the industrial hemp, we send it back to them in Kentucky. We do not grow our own hemp because legally we can’t do it yet in Mississippi.”

While Brasher believes there is a profitable future in processing industrial hemp at Kengro, and in even growing it someday, it may not be the salvation many Delta farmers believe it to be.

“In my opinion, it’s like any other new, startup business that comes along,” he says. “A lot of people will make it and a lot of people won’t. There’s not a big windfall for every farmer out there, it’s just not going to happen. Number one, we’re late to the game. It’s going to be hard to catch up to those guys who have already established markets. With the industrial hemp markets, such as the automobile industry, there are a lot of players in the game that use hemp, but from a world supply standpoint, there’s not really a huge shortage of hemp. There’s really a surplus of hemp, just as there is with other commodities. As I tell all of my farmer friends, there is an opportunity, but don’t think this is the salvation of your farming operation.”

“If you look at CBD production, the farmers that have experience with extensive labor, migrant and otherwise, will be the ones in my opinion to take advantage of legalization to grow. CBD production is a hand-intensive crop. Farmers who aren’t geared up to have enough labor to do that type of cultivation will have an uphill learning curve, for sure. On the other hand, industrial hemp is just like a traditional crop. If it were legal, this year I would have probably planted 75 to 100 acres of industrial hemp. Personally, I’m not interested in the CBD side of hemp; I see the capital that it took my Kentucky friends to get into it. But I am for legalizing the production of hemp, I’m not sure why the state didn’t do it three years ago. I just tell my fellow farmers to be cautious, it will be profitable for some and not for others.”