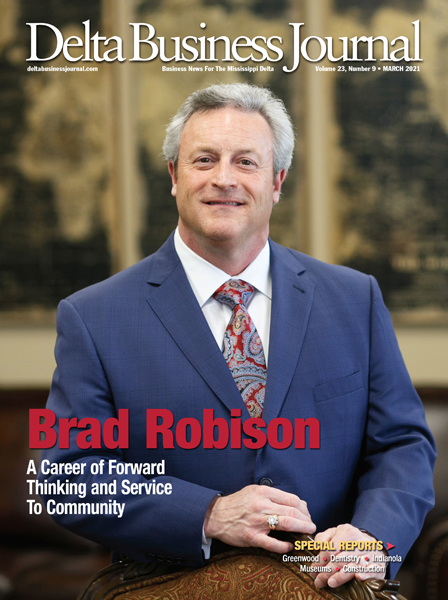 A Career of Forward Thinking, Service To Community

As CEO of the Tallahatchie Valley Electric Power Association in Batesville, Brad Robison has established himself as a leader on issues affecting, not only his local coverage area, but also across the state, region and nation.

And now, with the formation of TVEPA’s wholly-owned subsidiary, TVIfiber—established in August, 2019—Robison’s leadership abilities have been further enhanced by overseeing the first broadband provider by an electric cooperative in the state of Mississippi. Fulfilling a desperate need for internet services in the area, only accelerated by the COVID crisis, TVIfiber has provided incalculable benefits to the local community.

“We already feel the positive impact of rural broadband in Panola County,” says Joe Azar, Panola County’s Economic Developer. “Through this (broadband legislation passed in 2019), Mississippi has the opportunity to jump to the front of the line and excel. Broadband will make us more educated, skilled, and less intimidated to impact the world. The fact that it is also affordable will increase users and improve livability. Brad Robison contributed to the passing of the legislation and conveyed his enthusiasm to his board members. His leadership is an example to follow.”

For the Batesville native Robison, it could be seen as just another logical step in a career built around service and love of community.

A 1987 graduate of South Panola High School (and starting quarterback on the football team), Robison obtained his Bachelor of Science degree from Mississippi State University and shortly thereafter began his career in private land and forestry management.

“I did a lot of consulting work, buying land and timber for several years, also doing commercial, industrial and some residential appraisals after I obtained my real estate and appraisal license.” recalls Robison. “I married my wife Kelley, who I had known since elementary school, and by the time I turned thirty we had a family that was growing—now consisting of three boys, Colton, Dalton and Garrett—and decided to make a career change. I approached the CEO of Tallahatchie Valley Electric Power Association at that time and, in  November, 1999, I was hired as the Assistant Office Manager and later became  involved in public relations, economic development, and assisted the General Manager in daily company operations.”

Robison worked his way up the company ladder and, in 2004, the TVEPA Board of Directors allowed Robison the opportunity to serve as General Manager and Chief Executive Officer, his current role.

“At the same time, when I started as CEO of TVEPA, I was also serving as CEO of the two propane companies which TVEPA  owned then but have since been sold,” says Robison. “Being CEO has allowed me to put together a strong leadership team which has been crucial to the great progress we have made. My main goal at the beginning was enhancing a reliable electric system to serve our members and improve their quality of life, and we’ve done that. Toward those ends, we’ve implemented many cutting edge technologies, undertaken aggressive right of way management and concentrated on electric system maintenance which has improved service tremendously. We’ve placed a continuous value on having a well-trained and dedicated workforce which, currently, stands at about 120 employees. These men and women are the most dedicated, hardworking people I have ever had the privilege to work with.  On top of these things, TVEPA’s financial health has improved continuously which is so very vital.”

Robison has served in a number of leadership roles in state, regional and national organizations that support electric cooperatives, including—to name just a few of many—the Electric Cooperatives of MS Board of Directors, the North MS Industrial Development Association Board of Directors and the Tennessee Valley Public Power Association. He has also worked extensively with the National Rural Electric Cooperative Association, supporting co-ops in 48 states and serving 42 million people, as well as having been involved in several regional committees representing legislative concerns for states in the Southeast.

With the formation of TVIfiber, however, Robison may have reached a crowning achievement in his long and impressive career.

“We started from the ground up,” says Robison. “In 2019, when the Mississippi Legislature authorized and passed the Mississippi Broadband Enabling Act (HB 366), that allowed electric co-ops the ability to look into it and participate in the process. Immediately, the Board of Directors allowed us to commission several feasibility studies and decided it was something that we could, in fact, offer to our members. They recognized the need within our service area and have been supportive and engaged throughout the process. We felt if we didn’t step up and provide the service to those in the rural areas, no one else would. Consequently, we were the first in Mississippi to start a new company, which was TVIfiber. We received our first fiber reel in September 2019, exactly one month after TVIfiber was formally established. It was quite a celebration for our entire company. The benefits to our community that TVIfiber offers is almost unparalleled. We feel that our members, even if they live at the end of a gravel road, deserve the same internet quality as what people in major metropolitan markets enjoy. As just a few examples, farmers will have the ability to utilize precision ag techniques, cattle producers can participate in virtual cattle sales across the country and are not just limited to local markets, there will be access to telemedicine and telehealth, economic development, the creation of home-based businesses and of course, with COVID still a factor, educational opportunities and the ability to work from home will be in place whereas they were not before.”

“Prior to TVIfiber, many of our members only had access to internet service that was poor, intermittent and expensive,” continues Robison. “We can now provide them with all they need, at a great price, with service that is consistent, reliable and dependable. This has become a mission to us: internet service is a necessity now—not a luxury. It was our duty, in a way, to provide this service. Right now, only our membership can use TVIfiber, but we can build out and go outside of members-only in the  future. We’ve just wrapped up Phase I of our work in Panola County and are well into Phase II, with plans to start Phase III later in the year. We have over 1000 miles of fiber in the air right now and have gotten service to right at 2400 customers. We provide telephone, landline service through VoIP and wi-fi services with the internet product all at a cost that is incredibly affordable. The packages we’re offering are as strong, if not better, than what is commercially available. And I will tell you that our customers have been tickled to death,” says Robison. “The feedback we’ve gotten has been overwhelming. Look, our customers—serving parts of nine counties—they are our friends and neighbors. We’ve seen the need and the suffering and wanted to help them and make a huge difference to their lives. That is exactly what we’re doing, I’m proud to say.”

Robison says that TVIfiber began with a 48-month timeline process, but that has been drastically reduced and work is moving forward ahead of schedule. “We’re working hard to secure grant funding to help the financial stability of the project,” he notes. “We were also awarded a CARES grant from the state of Mississippi, a USDA ReConnect grant and a FCC Rural Digital Opportunity Fund grant, all totaling over $40 million.”

Whenever Robison can manage to find spare time, he enjoys hunting and fishing with his sons and taking the boat out with his wife.

“My two oldest sons are out of the house—Colton, who is twenty-five, is the Legislative Director for the MS Secretary of State’s office in Jackson; Dalton, who is twenty-two, is a senior at Ole Miss majoring in Integr­­­ated Marketing and Communications and our youngest, sixteen year-old Garrett, is a sophomore at Magnolia Heights School and plays football, too,” laughs Robison. “But, we get together as often as we can, and I’m blessed to say my family is the greatest ‘achievement’ in my life. To see the men they are becoming, and to see their love for the Lord, their integrity and their accomplishments gives me more pride than anything I have done professionally”

A member of many civic and philanthropic groups in his hometown of Batesville, Robison says he has many years left in his current roles at TVEPA and TVIfiber  and a lot left to do.

“At this point, my work is not a job anymore—it’s a mission,” he says. “All of my accomplishments are rooted in the faith that God has a plan and a purpose for all of our lives. My faith and belief in the power of prayer always leads my decision making and I recognize that true leadership comes from a servant’s heart led by godly wisdom.”