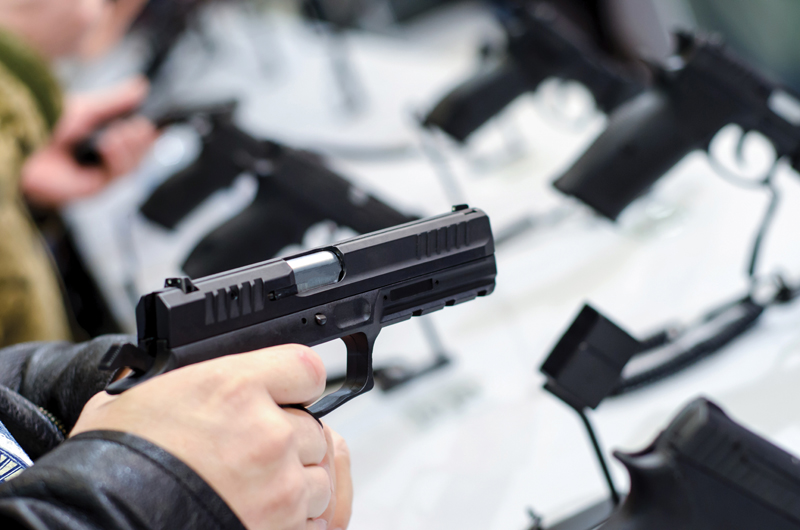 But Shortages Still Remain An Issue

With the ongoing pandemic, the election of 2020 and a new president, gun sales have reached record numbers in the U.S. including sales across the Delta. People are stockpiling for outdoor hunting activities or personal safety measures and many buying guns for the first time. This rise in sales has led to shortages in both guns and ammo that may not be alleviated anytime soon.

Jeffrey Jones, manager of Delta Outdoors said gun sales have been strong for the business, which has been in Cleveland for seventeen years. A full-service outdoors store, Delta Outdoors not only stocks guns and ammos, but also kayaks, bicycles, hiking and camping gear and more.

“Sales were definitely up,” says Jones. “To tell you the truth, I think a lot of people used money from their stimulus checks last year to purchase guns and ammo. Twenty-five percent of our store’s sales are from firearms and we certainly hit that.”

Jones said that over the last few months their biggest sellers have been semi-automatics and AR-style guns, anything high capacity, Jones went on to say that when Walmart made the decision a few years ago to stop selling  ammo and related products it boosted his store’s sales and that has continued.

“We’re seeing quite a few first time gun purchasers,” he says, “including more older people and women. People are taking advantage of their 2nd Amendment right.”

As far as ammo, Jones said they would usually order eighty percent of what they expected to sell for the year at the industry’s annual trade show held each February.

“We went, right before COVID hit,” says Jones. “And in the following month (March 2020), we began receiving calls from ammo manufacturers and distributors telling us that we needed to take everything then or that we wouldn’t get it. So, that meant me getting duck loads in the spring and sitting on inventory for several months. Even after doing that, we probably ended up receiving less than half of what we ordered. Any new or refill ammo orders were basically non-existent, as well. The common theme we heard was that there was a shortage of primers.”

Jones says when civilian gun sales go up, police forces around the nation have to purchase more to keep up their supply and, of course, they get top priority, not the stores like Delta Outdoors.

“And, then there was sickness due to COVID which forced a lot of warehouses to shut down or pull back on orders drastically. Several factors like these entered into the ammo shortage,” says Jones.

Tim Thompson runs and operates Bill’s Custom Automatics in Shelby and said that, for him, business was especially tough through the COVID crisis last year.

“It was a difficult period for us, without a doubt, only getting a little better when reopening was allowed over the summer” says Thompson. “We build precision custom firearms and sell a small amount of retail goods here—and at this point, for us, ammo is almost impossible to get. The distributors are having a hard time of it and so many people went into panic buying and stockpiled last year that it’s really difficult to get the ammo you need.”

Thompson says their sustenance is building and maintaining firearms for people in the Delta and across the nation.

“So we’ve managed and gotten through,” he says. “The demand for ammo is just so off the chart right now—it’s very difficult to find. If people think their 2nd Amendment rights might be threatened they react and make purchases—over the past year, a lot of them did just that.”

Barry Briggs, owner of The Sportsman in Greenville, says the ammo shortage is the worst he’s ever seen.

“It all started with the fear of COVID when the market was flooded with about seven million new gun buyers—I think people were just really scared. And, if you put a couple of boxes of ammo with each of those gun purchases alone you can do the math. Add to that, all of the people who had already been buying ammo and that resulting in an extreme shortage. We still have a shortage here. One of the biggest problems is getting all of the components you need to load the ammo: a company might be able to get the bullets, brass and pocket but not have the primers. Our business has weathered it, though. The Sportsman has been in business since 1978 and we are a full service outdoors shop, so we sell everything related to guns as well as clothing, archery products and work boots.”

Tammy Holloway is the owner of Delta Outfitters in Indianola and she echoes what others in the business are saying about the increase of gun sales and the concomitant decrease in ammo availability.

“We can’t get ammo or guns in right now,” says Holloway. “One of my distributors told me that it was hard for them to get the primer needed to make the ammo so that could be part of it. And, while some of the plants were closed or not running at full capacity back when COVID was really running high, I think now most of them are back open. Still, they can’t  keep up with demand because their orders are so backed up right now. When I ask when we can expect some ammo in I’m told that they don’t know—I can’t get any kind of timeline. And of course this frustrates us and our customers.”

Holloway says her store has also seen a big increase in gun sales, especially with first time buyers. “Right now, I’ve mainly got 9mm and 380 guns in stock and I have some ammo in stock for them that I put away. We’ve had a good past year in terms of business but I can tell you it would have been a whole lot better if I had had more guns and ammo to sell. We used to be able to call and order what we needed here in the store; now, they call us and tell us what they have! It’s gone completely backwards,” she says.

Becky Sheedy is the manager of Paul’s Mart in Cleveland. The full-service outdoors store carries “everything!” laughs Becky, including clothing, fishing gear and accessories and guns and ammo. According to Sheedy gun sales have been extremely good over the past year.

“We’ve seen a massive surge with anything relating to firearms, ammunition, reloading supplies, accessories—all have been up,” says Sheedy. “Paul’s Mart was blessed to be considered an essential business and not having to close so we weren’t negatively impacted by COVID last year.”

“I think self-protection is probably behind that but, of course, hunters remain our largest clientele,” she says. “Women are buying guns more often now, too. Handguns are our biggest sellers overall, but shotguns and rifles are not far behind. Obtaining the firearms and ammunition we need has not been as easy over the past year and not as plentiful as we would have hoped; but, we’ve got so many vendors with whom we’ve had relationships for a number of years, even decades, so that’s been helpful to us in keeping our inventory up.”

Sheedy agrees that COVID has played a role in obtaining ammo.

“We were told the warehouses often didn’t have enough workers to get the product out, It would be in stock—but no one to get it out to us,” adds Sheedy. “I’ve been here at Paul’s Mart since the mid-70s and we’ve weathered many economic ups and downs and ammo shortages, but never like this—it’s been the worst in our industry.”