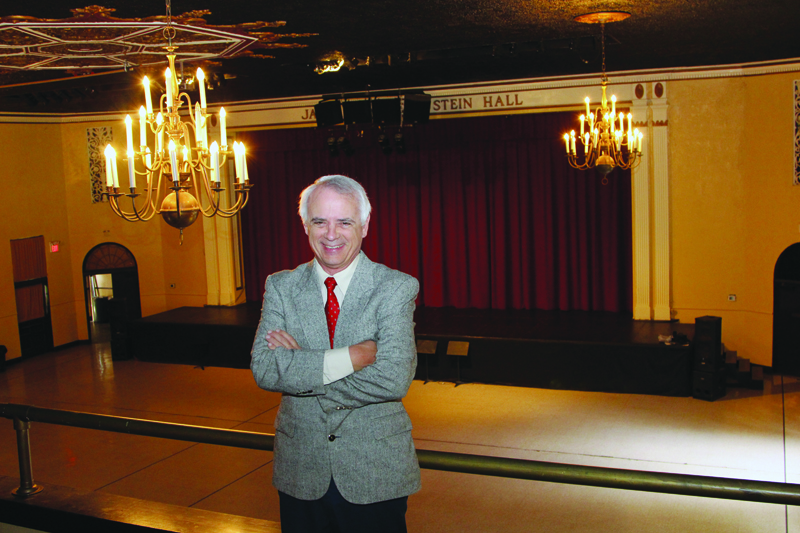 The Luckiest Man On The Face Of The Earth

Delta Center Stage has been bringing community theatre to Greenville for over forty years. Tim Bixler was hired as executive director in 2002 and is committed to the creative process that is community theatre.

“Delta Center Stage is a community theatre,” says Bixler. “That means we do not pay our actors and we function as a volunteer organization within the community. Our mission statement says it all: we are here to provide opportunities for members of the community to get up on stage and participate in theatre activities. We are not a presenter; we are a producer, and that’s a very important distinction.”

Bixler says Delta Center Stage (DCS) productions are started from the ground up and create everything that the audience sees.

“That means it’s very labor intensive and takes a lot of people, and that’s really the point,” he adds. “It’s what distinguishes us from professional organizations and we take that conscious distinction very seriously. We believe that the process of producing theatre is equally important to the product. You never know how you’re going to touch participants and volunteers deeply with what community theatre offers and that’s what makes it so special. We really have an opportunity to have an effect on people’s lives, especially young people. When I speak at Rotary events or with civic organizations, my first statement to them in most cases is: Ladies and gentlemen, I stand before you the luckiest man on the face of the earth because I get to do what I do.”

Bixler says that DCS enjoys a very strong reputation as an ambassador outside of its community through participation in state, regional, and international theatre festivals.

At the beginning of this journey, Bixler and his wife, Sonya, were theatre majors at Harding University in Searcy, Ark., where they were very active in the drama program. After marriage and graduation, they got very interested in the process of community theatre.

“Sonya became a drama teacher at Washington School here in Greenville for thirty-three years, she is now retired, and make no mistake, we are a team when it comes to this journey we’re on. She is as much a part of what I do as I am. She is a published author in the realm of technical theatre with costuming. She is an accomplished seamstress and actress. Sonya has been named Best Actress at the Southeastern Theatre Conference regional festival three times.”

Bixler says for himself, he went into the private sector for a while. They moved to Greenville in 1979 with a retail organization Bixler went to work for.

“We were just here temporarily, or so we thought,” he adds. “They needed a store manager in Greenville and they asked me to take the job. And I accepted, thinking we would stay for just a short time. And the rest, as they say, is history.”

Bixler says that when they first moved to Greenville, there had been a community theatre, but it had gone defunct.

“It closed in 1973. It had been a functioning community theatre since the 1920s, so there was a deep history in Greenville of this kind of activity, but it had just died. But after Sonya and I moved here, we, along with some others, started making inquiries and getting information on what would be the best way to get community theatre started again.”

So, in 1979, Delta Center Stage was born and the community response to it was extraordinary. And on June 1, 2002, after twenty-three years as a volunteer organization, Delta Center Stage hired its first full time employee, Executive Director Tim Bixler. Today, performances are ongoing and all upcoming events are available on their website and information on season tickets. deltastage.com

Bixler adds that with the pandemic, Delta Center Stage was an early recipient of Shuttered Venue Operators Grant from the Small Business Administration. One of the lesser known federal aid programs that came about in the second round of COVID relief financial aid turned out to be the largest financial grant awarded to Delta Center Stage during the recovery and re-opening process following the COVID-19 outbreak.

“This grant from the Small Business Administration has been the godsend DCS needed to assure full and complete financial recovery and resumption of full operations,” he says. “With this funding, we can state unequivocally that we are fully restored to our pre-pandemic financial condition, and have the necessary financing on hand to fully operate our newly announced season of shows.”

Another key element to recovery and re-start, he says, was clear communication with DCS supporters about what the whole process would entail from the local community.

“We chose to avoid any direct or ‘emergency’ financial appeal locally,” Bixler adds. “I felt all along that making that move would ultimately be unwise, especially in the context of the many other emergency needs locally during the shutdown. DCS has always positioned itself as a quality-of-life partner in our community; an organization that provides the community with a return on investment.  It was from that perspective that we made a somewhat direct appeal of our supporters and season ticket holders with our re-opening announcement.  The response to that appeal has been outstanding.  If trends remain in place, it appears that our 21-22 season of shows will be record-setting, both from numbers of season tickets sold and from gross season ticket income.

“And I’m still the luckiest man on the face of the earth.”