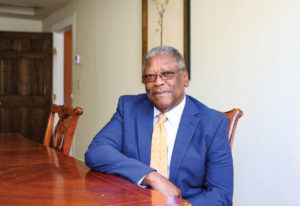 Willie Simmons of Cleveland has represented the 13th District in the Mississippi Senate for twenty-six years. During this time, he has taken care of the Delta many times over through legislation he has crafted or legislation he has helped craft with others. But now, his days in the Senate have come to an end as he runs for the Central District Transportation Commissioner seat, a position Dick Hall, who has recently retired, held for many years.
Simmons won the Democratic primary for the Central District Transportation Commissioner seat by a margin of 59 percent and he is considered to have a good chance of becoming the first African American elected to the position when the election is held November 5. At a recent Delta-wide fundraiser in Leland, a who’s who of regional Republican leaders were in attendance which says a lot about the important relationships Simmons has maintained over the past twenty-six years while serving in the Senate. Clearly, his support reaches across party lines.
Simmons is known for building consensus and for dogged determination when it comes to getting good things done in his district and in the state. Most recently he has served as chair of the Senate Transportation Committee, which has put him in a position to understand the critical needs of the state’s transportation system.
His wife of forty-seven years, Rosie Simmons says her husband is successful because he is a man of his word.
“He’s always operated with honesty, integrity and diligence,” she says. “When he sees a problem, he believes there is an answer for it and faithfully works to bring forth a solution. He loves people and he loves his public service work.”
Cleveland Mayor Billy Nowell has also admired Simmons for many years because of the way he is able to work across party lines to find solutions that are for the betterment of all taxpayers.
“He has been a Godsend to us in the Mississippi Delta, particularly Cleveland and Bolivar County and surrounding counties,” Nowell says. “I think the world of his ability and we wouldn’t be where we are in Cleveland today without Sen. Simmons.”
Simmons is known for working to bring together coalitions of people from diverse backgrounds to work on a singular goal. “That is why he is able to get things done,” says Indianola Mayor Steve Rosenthal. “He doesn’t pick sides by party, but gets things done for the Delta. Being over the Senate Transportation Committee has allowed him to help small communities that are financially strapped be able to repair their roads. He is a true leader who brings people together to work out solutions. Politics is all about relationships and getting like-minded people together. His years of building relationships will serve him well in this position.” Born in Utica in 1947, Simmons grew up during segregation. He graduated from Hinds County Agricultural High School in 1963 and then attended Utica Junior College (now Hinds Community College). He earned a B.S. in social science from Alcorn State University and then moved to take a teaching position in Rosedale at what was West Bolivar High School at the time. After two years, he was drafted into the Army and spent eleven months in Vietnam.
“I went into the Army at twenty-one years old,” he recalls. “I was in infantry, so I spent time on the battlefield. I think my military experience was a blessing in that I came back whole, and had no physical or mental problems. The military experience caused me to mature. I grew up. It was an experience I didn’t want to have, but it turned out to be one that rewarded me with being able to see other parts of the world, mature a little and come back home safely. It gives you a broader view. It was a different education than going to college. I am honored to have served our country and I am grateful for God’s grace and mercy.”
After twenty-eight months in the Army, he came back to Cleveland and worked in Mound Bayou as a job coach for the STAR Manpower Program for two years, followed by two years working for the U.S. Postal Service in Cleveland. Simmons continued his education and received a Master and an Education Specialist Degree from Delta State University (DSU).
His next job was working for DSU as Director of the Pre-Release Job Placement program attached to Mississippi State Penitentiary at Parchman to assist inmates find jobs after release.
“It was challenging to get employers to accept offenders, but it turned out to be very successful because many had good work experience and attitudes,” says Simmons. “They became good employees for many of the businesses we worked with.”
During this time Simmons was also employed by DSU as a visiting professor.
He served as Deputy Commissioner (second in charge) for the Mississippi Department of Corrections for two years until he resigned to run for Senator of District 13 in 1992.
“My responsibility as Deputy Commissioner was to work with legislators and provide reports on the inmate population and analyze the cost associated with housing the offender population,” he says. “It put me in close collaboration with legislators and gave me firsthand experience on the legislative process. This experience was very beneficial to me when I became a senator in 1993.” 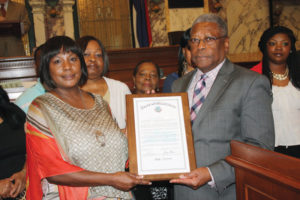 There are only a few Mississippi legislators who have served longer than Simmons. And through the years he has worked to build relationships that rewarded not just his district, but the state.
“No one can achieve in the legislature alone; an individual’s success is all based on his or her relationships with others,” he says. “I am grateful for my relationships because they have rewarded the Delta and State with many resources. Important to me, however, is the fact that these relationships and resources have come without my ever abandoning my personal VIP—Values, Integrity and Principles. My goal has always been to work with all regardless of their political party, race, religion or zip code.”
Other transportation achievements he has worked on include appropriating $10 million to remove the overpass on Highway 82 that was so low eighteen-wheelers were bypassing the Delta. Another important project was securing $3.6 million to upgrade and repair Park Avenue in Drew, improvements to Highway 8 west in Cleveland, Highway 14 in Sharkey County and Highway 552 in Claiborne County at Alcorn State University.
A crowning achievement that took many private and government partners was the GRAMMY Museum Mississippi.
“We were able to convince the legislative leadership we needed $7 million in addition to local tax support and private donations, and now we have a first-class museum bringing people from all over the world to Cleveland,” says Simmons. “It has made a big difference.”
Another important legislative appropriation was providing $2 million to the BB King Museum and Delta Interpretive Center in Indianola. A smaller appropriation that was significant was funding a Terrance Landing docking point on the Mississippi River that will allow tourists from river cruises to dock and tour the Mississippi Delta’s heritage and culture sites. Funding has also been provided to restore the I. T. Montgomery Home in Mound Bayou.
Simmons decided to run for Transportation Commissioner after long-time Central District Commissioner Dick Hall decided against running for re-election.
“I am running because I want to make a difference and make sure that there is equal distribution of resources in the twenty-two counties in the Central District,” Simmons says. “All of those communities have infrastructure needs and I want to be a commissioner who helps make those improvements happen. I feel like I’m in a position to do that because I have been prepared. I was appointed to chairmanship of the Senate Highways and Transportation Committee twice by Lt. Gov. Tate Reeves. I also served on the Budget Committee and the Appropriation Subcommittee that put together the budget for the Department of Transportation (DOT). Serving in these positions have given me an opportunity to know the needs of DOT and how to work not just in the Capitol, but to have relationships with our local officials, also.”
Simmons stresses that the transportation system has to be holistic. Trucks don’t unload at the end of the interstate but also need good state and local roads. The roads and bridges must be capable of handling the loads. In addition to trucks moving goods, the road system is vital for first respondent units, fire trucks, ambulances and public safety.
“I’m going to be the kind of commissioner who will collaborate with local officials and share resources to impact our entire transportation system,” says Simmons. “I was very successful in the primary election and now I look forward to the general election on Nov. 5.”
Race has a tendency to enter into elections. Simmons feels that based on his relationships and track record that he will get votes from both whites and blacks. He believes a lot of progress has been made in race relations. He points to his appointment to chair the Senate Highways and Transportation Committee—handling the third largest budget in state government—as evidence of growth and improvement in Mississippi.
One of the biggest issues with highways is that the user fee at the pump has not been increased since 1989, which means the funding system is incapable of taking care of the transportation infrastructure. Simmons supports increasing the user fee by ten cents a gallon with a three-year phase in.
“I think it is way overdue and increasing the user fee so people who use the roads pay for the maintenance and improvements is the way to do it,” he says.
In addition to his legislative work, for sixteen years Simmons has been the owner of the Senator’s Place, “the best Southern soul food you would ever want to eat, cooked the way your mother and grandmother cook.” In fact, Simmons’s place is so famous the late Anthony Bourdain stopped in and included the restaurant on his show on the Food Network.
Simmons is promoting his Future Forward Initiative that he says will create new jobs, beautify the highways, complete needed highway projects, and develop an infrastructure system that is safe and adequate for the twenty-first century to transport citizens and commerce using all available transportation means. A key prong of that initiative is increasing funding for the transportation infrastructure system by $300 million per year. It also involves encourage the legislature to enact a second phase of the Emergency Bridge Act by passing a $250 million bond in 2020.