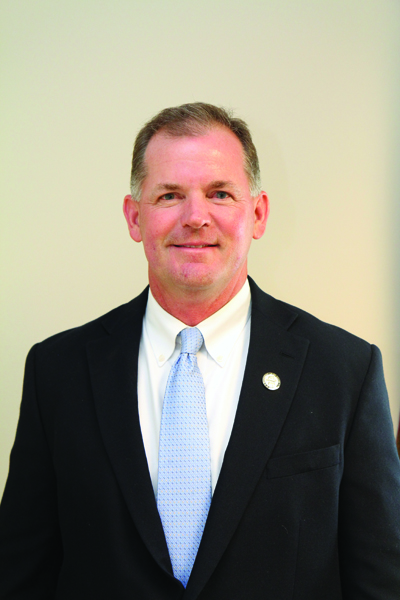 With 212 miles of levees and 360 miles of interior streams under his charge, Peter Nimrod stands tall as a Delta advocate. His work as the Levee Board Chief Engineer may find him standing on a levee one day and in Washington D.C. the next.  Employed by a six county Board, Nimrod works with the U.S. Army Corps of Engineers and other federal agencies to keep the levees strong and maintained and the streams open for flood control across those Delta counties.

The Auburn graduate and Greenville native first worked for W.L. Burle Engineers and came to the Mississippi Levee Board in 1999. He’s worked through major flooding issues and now has presided over an 80-year problem – backwater flooding in the South Delta. The Flood Control Act of 1941 authorized flood protection for the South Delta but in 2008 the EPA vetoed the pumps. Following the devastating 2019 Backwater Flood that decision was recently overturned and Congress appropriated $9.2 million for Yazoo Backwater Pumps engineering and design activities to immediately begin.

“The Pumps have had its moments throughout history but now we’re in good shape. We’re moving forward with that project and hopefully within a year we’ll have the Pumps under construction,” says Nimrod.

The project will include a pumping station with twelve pumps that will move 14,000 cubic feet per second pumping capacity.

“The Pumps will give us a lot of flood protection for the people, the homes, the crop land, the wildlife, trees and the environment,” he says. “When the Mississippi River gets high it starts to back up the Yazoo River. Then we close off the drainage structure that drains off the Delta by gravity flow to keep the river from backing in and inundating the Delta. But when the water that is trapped behind the closed drainage structure gets to 87 feet, we’ll turn on the pumps and pump the water in the Delta over the levee into the Mississippi River. That will give us flood protection in the South Delta.”

When he’s not patrolling the levees or in meetings about all things levees and flooding, Nimrod enjoys partaking in USTA tennis matches around the state and locally with friends. He and his wife, Allison, have three children, Dillon, Paxton and Brantley.

“We love to do whatever the kids are doing. Dillon graduated from Ole Miss, Paxton is currently at Ole Miss, and Brantley plays a lot of sports,” he says.

The Nimrods bought Sherman’s Restaurant in Greenville in 2012 and recently suffered a fire. At press time they were still waiting on a final damage estimate from their insurance company.

Peter says, “Allison does a fantastic job running the restaurant and since we have been closed, we miss our loyal customers, friends and our staff which has become our extended family.”